By MyPetNeedsThat Staff
Last Updated August 10, 2022
Every product and service on My Pet Needs That is independently selected by our editors, contributors, and experts. If you purchase something through our links, we may earn a referral fee. Learn more

In this article, we will take an in-depth look at pocket Pitbulls: their personality, reputation, breed characteristics, and more. If you want to learn more about miniature Pitbulls, we think it’s important to do your research first to know what this dog breed is like. Learn how to train this American pit bull terrier properly and know what to expect if you adopt or buy this type of dog from a reputable source.

Want to know why the American pitbull has a fierce reputation? We will look at the history of these muscular dogs and discuss how this has changed over the years. Owning a designer dog breed doesn’t come without its responsibilities, and by the end of this article, you will be more informed about whether or not the mini pitbull is for you.

Read on for a brief look at the main characteristics of a pocket bully.

A Short History of the Pocket Pitbull

The pocket pitbull is a hybrid mix combining an American pitbull terrier with a Patterdale terrier, and although the mini pitbull terrier has a personality of its own, it wouldn’t be fair to write an article on this mixed breed without first covering the history of the American pit bull terrier and looking at its unfavorable reputation.

The American pitbull terrier originated from the UK around the 1800s, where there were bred from old English bulldogs who were used for a cruel sport called “bull baiting” – where several of these dogs would harass large animals such as bulls and bears until the animals collapsed from exhaustion or injury.

Old English bulldogs were eventually bred with terriers to create a faster, more agile breed, which is when the name”Pitbull terrier” was created. Over the years, the American pit bull terrier has been used for various cruel sports, including “ratting” (where they were placed in a pit and made to kill rats) and dog fighting.

Despite their strength, American pit bull terriers were loyal dogs trained not to bite their human companions. This meant they became great all-around dogs helpful around the farm – herding animals, guarding livestock and families – earning them the well-known nickname “nanny dog”.

During the first half of the century, the American pit bull terrier was seen in a favorable manner and became an American mascot due to their service during WWI and WWII.

Despite being outlawed in America during the 70s, dog fighting began re-emerging during the 80s, which meant that criminals sought the American pit bull terrier for this purpose, giving them a very bad reputation for being dangerous dogs. This, coupled with bad press coverage, gave the naturally loyal and friendly pitbull a negative label.

Due to numerous organizations, the American pitbull has regained its positive reputation, but it has taken a very long time.

What is the Purpose of a Pocket Pitbull?

Pocket Pitbulls result from mixed breeding where a pitbull or American Staffordshire terrier has been bred with a small Patterdale terrier. These designers (not purebred dogs) were bred to combine the smaller size of Patterdale terriers with the strength and friendliness of an American pit bull.

The miniature pitbull isn’t recognized by the American Kennel Club (AKC) or International Designer Canine Registry as is a relatively new breed – but don’t let this put you off buying or adopting one of these pocket pups.

The miniature pitbull is perfect for people who are looking for dog breeds that combine the friendliness, strength, and loyalty of an American pit bull terrier with the smaller Patterdale terrier. But don’t be fooled by the name – despite being called pocket Pitbulls, these mixed-breed dogs will not fit into your pocket! 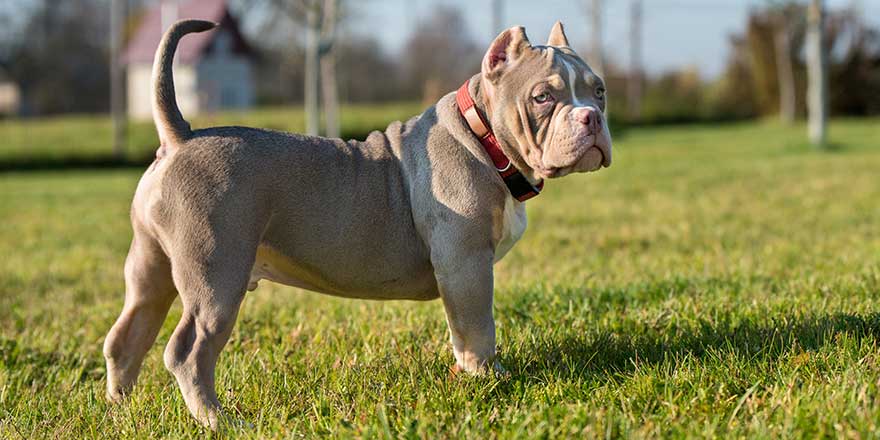 The pocket pit bull is a smaller version of the parent breed, which means they are very similar in appearance. There’s a common misconception that the pocket pitbull is a very small dog – after all, they are called miniature Pitbulls – and some people even believe that they will only grow to be pocket-sized.

A full-grown teacup pitbull will still reach up to 10 kg in weight and up to 16 inches in height. Pocket Pitbulls have a stocky build with well-defined muscles, large-sized heads, and strong jaws with a thick neck and broad shoulders. Due to the mixed breeding with Patterdale terriers, pocket pit bulls have more of a wedge-shaped skull, and their muzzle is a little narrower.

Most pocket Pitbulls have either amber or brown-colored eyes. Pocket Pitbulls are slightly different from the Patterdale terrier, which has a coarse, short coat. These dogs have a smooth coat ranging from tan, brown, brindle, chocolate, black, red, and blue – with either a solid color or mixed markings.

As with other dog breeds, pocket pit bulls are not immune to disease, and a few health problems are common with this hybrid dog, which have been inherited from parent breeds.

These are the most common health issues with pocket Pitbulls:

If you have health concerns regarding your pitbull, you should always speak to a veterinarian who can properly check them and give the best advice.

What to Feed Your Pocket Pitbull 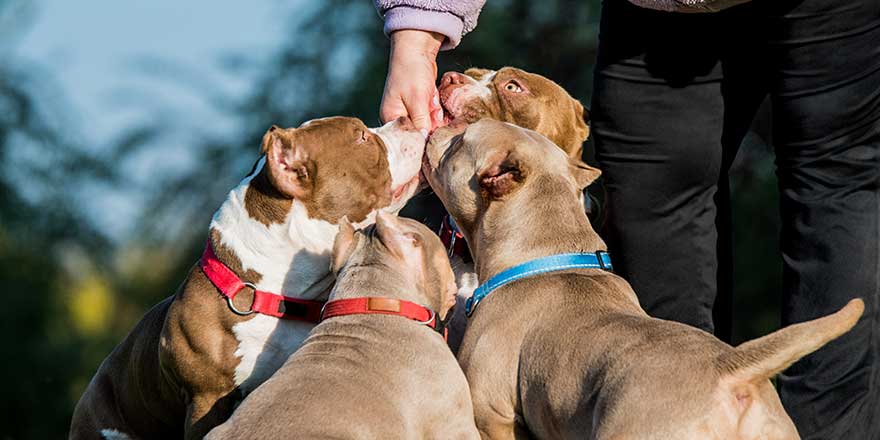 A happy, healthy dog is a dog that has good nutrition and adequate exercise. Like many other dogs, pocket pit bulls should be fed premium dog food. Kibble is the recommended dog food of choice as it’s packed with vitamins and nutrients specific to your breed of dog.

Pocket Pitbulls do not need much food, so ensure you never overfeed them so they can maintain a healthy weight. All dog foods label their recommended portion sizes on the pack, so be sure to stick to this and speak to your vet if you have any questions regarding your dog’s diet. 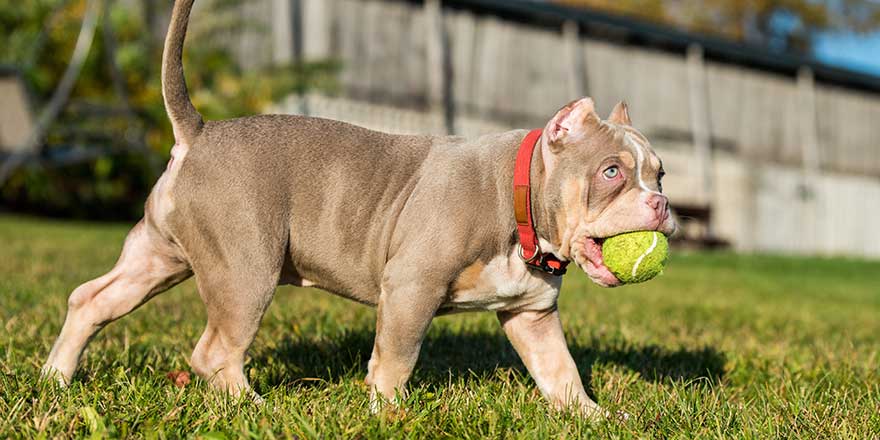 You might not think that small pitbull breeds are easy to train, but with the right advice, research, and diligence, your properly trained pocket pitbull puppy will be well-behaved and happy before you know it!

Dogs develop behavioral issues young, so pocket pitbull puppies should be trained from the get-go! Your pocket pitbull puppy is a natural hunting dog (they have inherited this trait from their Patterdale terrier parent), so early socialization is imperative.

Why is Early Socialization Important?

When your pocket pitbull is at a suitable age – usually around 7-8 weeks after their first round of vaccines – they can start to be socialized. This will ensure that they get used to different sights, sounds, and environments and get used to other people and animals.

Training your sweet dog to be friendly around pets and children is vital to train them to behave properly. Once your pocket pitbull gets used to different scents, sights, and sounds, they will no longer display fear and see things as a threat.

The Benefits of Positive Reinforcement

Positive reinforcement is the most effective method of training. This dog breed responds well to positive praise and treats.

Your pocket pitbull needs lots of mental and physical stimulation and a loving and caring environment, so make sure you exercise them regularly and give them suitable toys to keep them active. A bored dog will display negative behavioral issues and sometimes even aggression.

Are Pocket Pitbulls Safe Around Children?

If trained correctly, pocket pitbull dogs make great family dogs. However, introducing strong, active, and boisterous dogs to very small children is risky as they can easily knock them down. 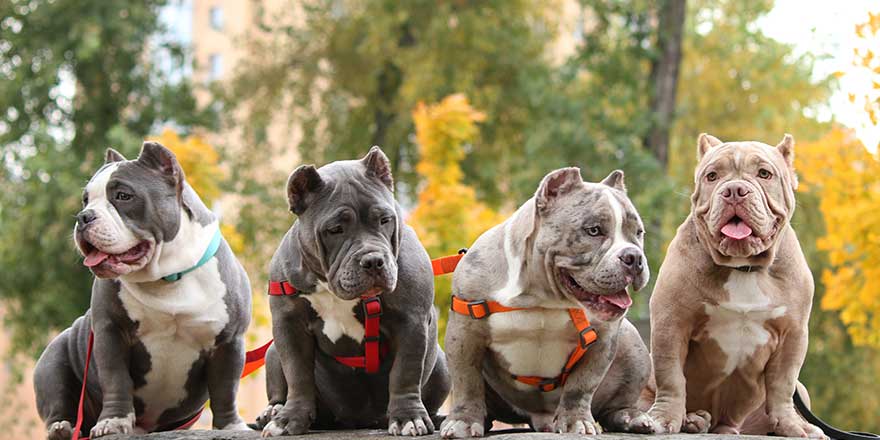 Pocket pit bulls have a lovely temperament and make excellent family dogs. Despite the negative press and bad reputation for being aggressive dogs (thanks to criminal use, illegal dog fighting, and bad press coverage), they are loyal and gentle, if a little boisterous!

For this reason, we would recommend that this type of dog isn’t suitable for very young families as they may be too strong for small children and will be able to knock them over easily during play.

These dogs can have certain health issues, but it’s common for dogs to be prone to particular conditions when they are bred. The most important thing is to ensure that your dog is well cared for, fed high-quality food high in nutritional value, and exercised regularly.

These dogs are intelligent and strong. They need to be trained and socialized from a young age to ensure they do not develop unwanted negative behaviors.

We always advise you to follow professional advice and enroll your dog into dog obedience school if you need a little help.

The miniature pitbull is a mixed breed of dog combining an American pitbull terrier and Patterdale terrier. These dogs will not fit into your pocket, and they are not teacup sized - they are sturdy, strong Pitbulls that share most of the same characteristics of a standard pitbull but are slightly smaller.

These dogs can still weigh up to 10 kg.

If you are looking to bring this dog into your life, then you will not only have to take into consideration the cost of the dog but also food, toys, bedding, and adequate pet insurance.

These designer dogs are more expensive than their parent breeds, so you can expect to pay around $1500-$2500.

Make sure you buy your dog from a reputable breeder - you should never buy from a puppy farm as they are deeply unethical.

If you are viewing a litter, be sure to ask the breeder questions regarding the health of the dog's bloodline - parents and grandparents.

Research breed-specific laws to ensure that your dog will be legal in your country and state.

This depends on lots of different factors. These bred dogs are prone to numerous health conditions such as heart disease, hip and elbow dysplasia, allergies to the skin, Brachycephalic Airway Syndrome, and hyperthyroidism.

However, there are things you can do to minimize health risks for your dog. A healthy, nutritious diet will ensure that your dog doesn't gain weight when combined with adequate exercise and play.

There are also special shampoos that you can buy from pet stores that are specifically created for sensitive skin.

Make sure you have a good pet insurance plan that will cover inevitable veterinarian visits, and always seek professional advice as soon as any potential health problems arise.

Pitbulls can lead happy, healthy lives with the right care and attention.

The correct answer to this question is...how small is small?! If you are looking to buy a very small dog, this breed might not be for you. As we have discussed throughout this article, pocket Pitbulls are smaller than the American pitbull, but they are still sturdy and can grow up to around 10 kg. Unfortunately, the label of "miniature" pitbull and "teacup" pitbull is greatly misleading as these dogs do not stay puppy-sized forever.

In short, no. These dogs are a mixed breed combining the American pitbull and Patterdale terrier and therefore are considered to be a hybrid breed.

They can live up to 13 years old, but this will depend on their quality of life if they have health conditions, and how well they are cared for.

The Best Dog Food for Pitbulls in 2022

Dogs
The Best Toys for Pitbulls in 2022
Pitbull Growth Chart – When Do Pitbulls Stop Growing?

Dogs
Pitbull Growth Chart – When Do Pitbulls Stop Growing?
From Red and Blue to Merle – The Most Popular Colors for Pitbulls

Dogs
From Red and Blue to Merle – The Most Popular Colors for Pitbulls
Pitbull Ear Cropping – Should You Do It?

Dogs
Pitbull Ear Cropping – Should You Do It?
How Long do Pitbulls Live?

Dogs
Are Pitbulls Hypoallergenic Dogs?
Why Are Pitbulls So Clingy? Understanding Your Pup’s Needs

Dogs
Why Are Pitbulls So Clingy? Understanding Your Pup’s Needs
Pitbull Names – Ideas and Inspiration