By MyPetNeedsThat Staff
Published October 25, 2019
Support us! Mypetneedsthat may earn a small commission from affiliate links in this article. Learn more

Founded in the 1940s, Iams is one of the oldest pet food brands on the market. With decades of experience in manufacturing both dog and cat food under its belt, the company enjoys worldwide popularity among pet owners who want affordable but good-quality food for their furry companions. However, not all pet owners agree that Iams is a good-quality brand, especially those who are against grains and meat by-products in their dogs’ and cat’s food. So, which is it? Is Iams good enough for your pup or should you look elsewhere?

In this guide, we help you answer that question by reviewing some of the brand’s most popular recipes. We also talk about the company itself, its history, potential reasons why you may want to give Iams a try, and so much more. And if you want just the short version of Iams’ advantages and disadvantages? Check out our Pros & Cons list found at the end of the article! 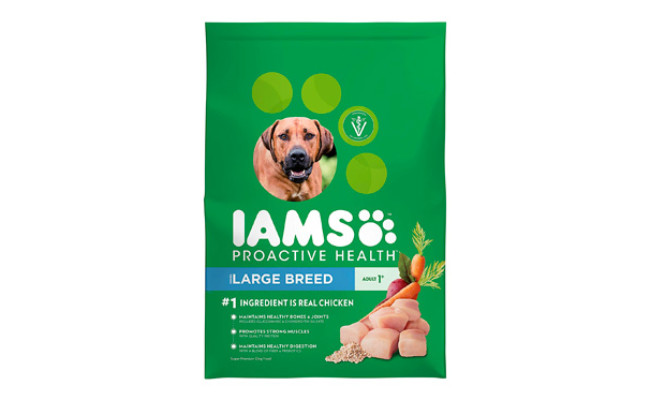 Formulated to support the nutritional needs of large breed dogs, this Iams Proactive Health recipe is a good choice for most large breed pups. Featuring real chicken as the first ingredient, plus chicken by-product meal for extra protein and nutrients, this formula is quite rich (but not very high) in overall protein, helping to support muscle growth and development.

Aside from nutritious protein, the recipe also contains wholesome grains, including whole corn, sorghum and barley, which are packed with fiber for healthy digestion. Another thing we like about this food is the fact that it includes glucosamine and chondroitin – crucial for keeping those joints healthy and agile. Importantly, there are no artificial colors or preservatives, so the recipe is suitable even for sensitive dogs. 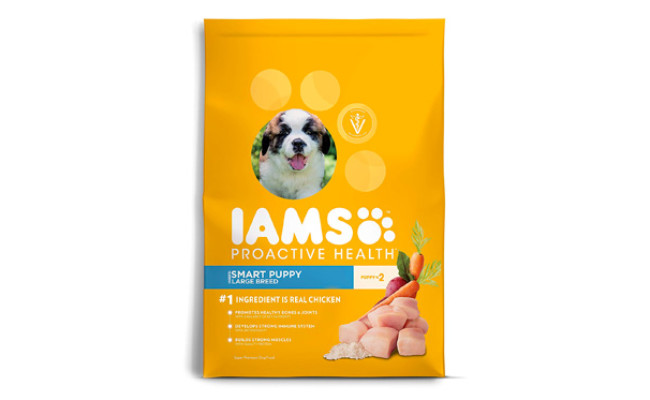 Young pups will surely love the real chicken flavor of this IAMS Puppy Formulation. While designed for puppies of large dog breeds, we find that the formula is suitable for pretty much all puppies as it comes with the right blend of nutrients, including plenty of protein for muscle growth, and DHA for proper brain development.

The calorie content of this recipe is higher than the other formulations of the brand, highlighting its understanding of the unique energy requirements of puppies. As rambunctious as they can be they’ll be able to utilize this substantially higher energy content for their playtime and exercise activities. The Iams Smart Puppy also includes a healthy dose of micronutrients to go with its high protein and moderate fat content, ensuring optimum development and overall well-being for your tiny pup. 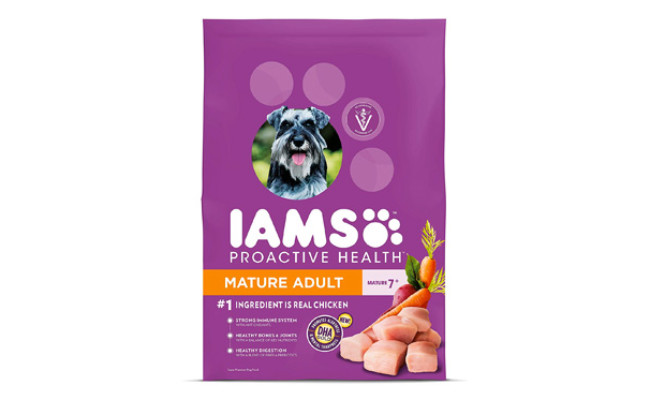 Senior dogs and those approaching their golden years will typically benefit from eating foods lower in calories and fat compared to their younger counterparts. As such, one can always consider the Iams senior dog food as it’s formulated with nutritious ingredients for overall health and vitality without being high in calories or fat.

The first two ingredients are chicken and chicken by-product meal, so the recipe is quite rich in protein. Other ingredients include whole grains such as barley and sorghum, carrots, and dried beet pulp, all of which are packed with fiber for gentle digestion. There is also l-carnitine which helps your dog’s metabolism burn fat faster, promoting a healthy weight. Of course, the formula is also fortified with all important minerals and vitamins, so it provides a 100% complete nutrition. 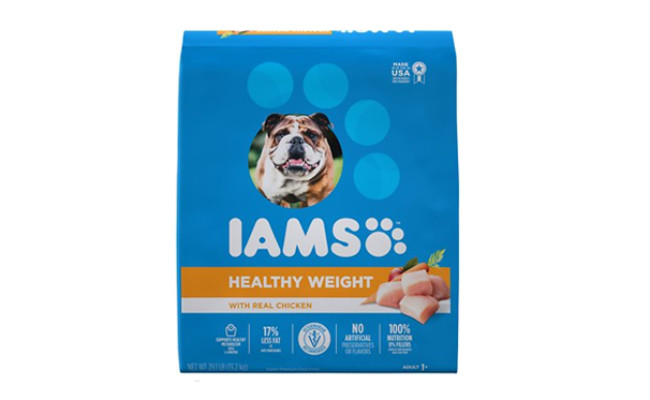 One of the most popular weight-control dog foods on the market, Iams Healthy Weight is definitely worth checking out if your pup is struggling with excess pounds. While made with farm-raised chicken, wholesome grains, fish oil and chicken fat, this recipe contains less fat than any other Iams formula, making it a good choice for overweight dogs. Unlike other Iams recipes, this one doesn’t feature animal protein as its no.1 ingredient; instead, whole corn comes first, and chicken by-product meal second. While this could be an issue for highly active adult dogs, it’s not a problem for overweight pups who need lower-calorie foods. To further help your pet shed that excess weight, the recipe includes l-carnitine which supports a healthy metabolism. The formula is also supplemented with essential minerals and vitamins, offering complete and balanced nutrition.
Key Features: 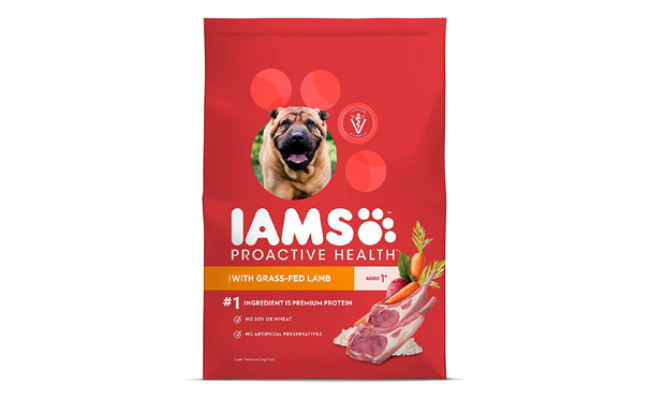 And now, something a little bit different – lamb and rice dog food. Unlike most Iams recipes, this formula features lamb as its first ingredient and rice as the third, making it a good option for picky eaters. Aside from these tasty additions, the recipe also contains the usual ingredients including chicken by-product meal, barley, sorghum and whole grain corn.

To support your pet’s digestion, the formula contains a blend of fibers and prebiotics (which partly come from grains), so it should be suitable for pups with sensitive stomachs. There’s also plenty of omega-6 fatty acids for supple skin and shiny coat, as well as antioxidants for a strong immune system. Overall, a nice budget-friendly kibble that should satisfy the cravings of most fussy dogs.

Created in 1946 by Paul Iams, IAMS is a brand of pet food that is widely known in both dog and cat food industry as the pioneer of using animal-based proteins in dry dog foods. Two decades later, Paul Iams established Eukanuba (1969), forming two of the most easily recognizable brands of high-quality dog food. Since the company placed emphasis on using actual meat in their formulations, they faced bankruptcy during the 1973 Arab oil embargo because the prices of meat and bone meals more than tripled. This was worsened by the price control measures instituted by the Nixon presidency at the time; the company was using very expensive ingredients in their recipes but was unable to raise its prices because of the price freeze.

When the IAMS Company was bought by Clay Mathile in 1982, the brand slowly regained its footing. By 1999, the company was already making $900 million before finally selling it to Procter & Gamble. In 2006, the conglomerate reorganized both Iams and Eukanuba to form Procter & Gamble’s Pet Care Division. In 2014, P&G sold its pet nutrition line to Mars, Inc. except for its European market which was sold to Spectrum Brands. As such, European markets are served by Spectrum while the rest of the world is covered by Mars.

The brand is best known for producing its popular ProActive Health line of pet foods, which is based on “tailored nutrition”; basically, the entire line is centered around the pet’s age, size and breed, as well as certain special needs.

Sadly, there have been dog food recalls in the brand’s history, although most of these were done on a voluntary basis. Proctor & Gamble recalled Iams and Eukanuba products in 2010 because of the salmonella scare that affected the whole industry. In 2011, the brand recalled a single production lot of its ProActive Health Smart Puppy formulation because of possible aflatoxin toxicity. In 2013, some production lots of Shakeables Turkey and Lamb dog treats were recalled for fear of mold growth. Also in 2013, the company recalled certain production lots due to risk of salmonella contamination.

Why Choose this Brand?

Pet owners who are looking for affordable but quality dog food that puts emphasis on the importance of nutrition that is tailored to the specific needs of their pets (breed, size, and life stage) will find Iams to be a worthy choice. All of their recipes contain everything a dog needs to remain healthy and happy, including enough protein and fat, some fiber, plus all the micronutrients.

Folks who are wary about wheat and soy will also love the Iams brand as it doesn’t contain these two ingredients. However, do take note that most of their formulas contain corn, mostly as ground whole corn. Nonetheless, based on the experiences of pet parents who seem to be very satisfied with this pet food one can say that the inclusion of corn in a nicely balanced recipe doesn’t really matter that much.

Importantly, all Iams pet foods are carefully designed to adhere to the requirements set by the AAFCO. While the brand isn’t the best when it comes to providing your dog with the highest possible amount of easily digestible protein, it doesn’t contain very low amounts of protein either. As a matter of fact, there are quite a few pricier dog food brands with much lower protein content. Overall, Iams is a solid choice if you’re on a budget as their formulas are well-balanced and easily digestible.

When taken on a dry matter basis, Iams food contains about 27.8% protein which is slightly lower than the average of other dog food brands that come with dry protein matter of about 32 to 42 percent. Still, it is a lot better than other similarly-priced dog food formulations.

What is quite considerable is that the brand strives to put good-quality, easy-to-digest animal-based proteins in its recipes. From the usual chicken to more novel proteins like lamb, it follows in the tradition of using animal proteins as the principal ingredients in its products. However, when compared to some specialty dog diet brands there’s really still much to be desired.

The brand also makes sure that the proteins are always named and specified, so you won’t see ‘poultry’, ‘meat’, or ‘fish’ by-product meals here; instead, you’ll see clearly named proteins such as chicken by-product meal. This conforms to one of the fundamental requirements of leading veterinary nutrition experts to always go for food products that have clearly identifiable proteins.

The average crude fat content of IAMS dog food is 13% which is equivalent to about 14.5% when it comes to its dry matter content. This is considered to be moderate since the minimum requirement by AAFCO is 5.5% for maintenance purposes and 8.5% for growth and development goals.

Some might consider this to be too low, others may look at these levels as being too high. Regardless, the mere fact that the brand also integrates good sources of both omega-3 and omega-6 fatty acids such as chicken fat and fish oil should help improve a variety of physiologic processes in dogs.

When you consider the dry matter content of both proteins and fats and subtract the moisture content, you get a moderate amount of carbohydrates at about 47 to 48 percent. This is quite better than the average budget-friendly product whose carbs can be as high as 70%. Although canine nutrition experts have not put any standards as to the minimum and maximum amount of carbs that can be given to dogs, one only needs to look at dogs’ ancestral diets.

There is one aspect of Iams that is stirring quite a debate. Its formulations are devoid of wheat and soy yet include whole grain corn in many of its products. Corn is largely believed to be as allergenic as wheat and soy so there might be an issue in this instance. This is also what has led some pet parents to believe that Iams dog food products actually contain a lot of fillers.

On a more positive note, IAMS uses wholesome grains like barley and sorghum in almost all of its recipes. These are combined with fresh vegetables and sometimes fruits to help improve the nutrient profile of a formula.

Because of its use of high quality meats as main ingredients in almost all of recipes, plus the inclusion of vegetables, fruits, and other botanicals, one can always count on an array of micronutrients like vitamins and minerals in all Iams formulas. In many instances, special supplements like chondroitin, glucosamine, and essential amino acids are added to beef up the product’s case-based formulation.

IAMS dog food contains moderate amounts of proteins, carbohydrates, and fats that create a more or less well-balanced formulation for dogs. Just like what many IAMS dog food reviews have noted about the brand, it fares well among pet parents who are looking for a good-quality dog food that will never hurt their pockets.