By MyPetNeedsThat Staff
Last Updated January 27, 2022
Every product and service on My Pet Needs That is independently selected by our editors, contributors, and experts. If you purchase something through our links, we may earn a referral fee. Learn more

One litter box may seem fine if you only have one or two cats, but the ratio of litter boxes to cats really does matter once you reach the status of being a household with multiple cats. Cat litter boxes need to be kept clean and this can be difficult to do when cats share a litter box. Today, we answer how many litter boxes you need in your home if you have multiple cats.

It’s not ideal for multiple cats to be sharing a litter box in one room. Ideally, you should have a maximum of two cats per medium to large-sized litter box – that means a household with four cats would work best with two to three litter boxes. The number of litter boxes always rises when more cats are added to your surroundings.

To keep your cats happy, the most important thing is keeping the litter boxes clean by remembering to remove waste. A self-cleaning litter box is great for this because you don’t need to spend your day constantly checking your cat’s litter boxes to do waste disposal. As a cat owner, we’re sure that you have more important things to do with your day than scooping cat waste every few hours.

When in doubt, always set-up an extra box somewhere in the corner of your home for your cat to use. There’s nothing wrong with having an extra litter box, especially when you consider that cats prefer to have their own space to do their business.

Some cats will happily share a litter box. There’s no problem with having one large litter box for two cats because cats using each others litter boxes are often very friendly with each other; but you should still provide more boxes where needed. Yes, this does mean more cleaning is needed, but you can set your own time to do this throughout the day.

Shyer or more aggressive cats (such as an alpha cat) may prefer a separate litter box rather than to share one litter box with any other cat in their home. 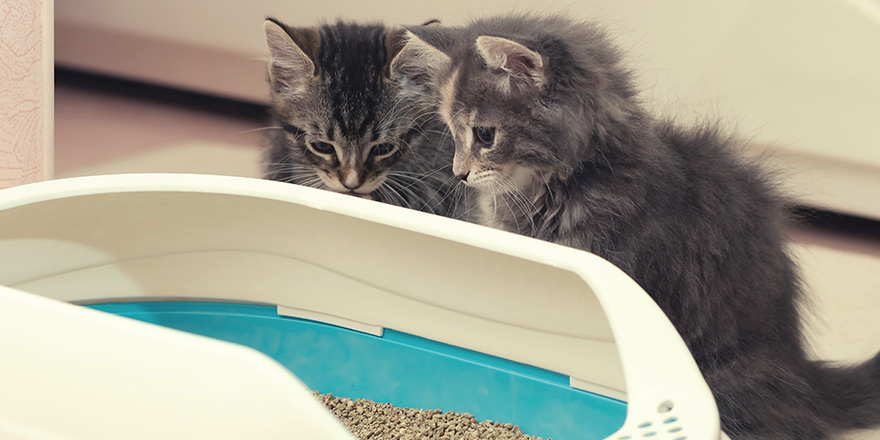 How to Set Up Multiple Litter Boxes in Your Home

Now that you have enough litter boxes for all of your cats, it’s time to set them up around your home. Cats are territorial animals and having multiple boxes will save you a lot of grief. You’ll also find that you have a cleaner litter box for each cat when they have their own specific litter box to use.

Pet owners should place the separate boxes in quiet areas of the house that see little footfall. When cats are disturbed by loud noises, they don’t particularly feel like going to the bathroom, and you may end up with cat waste where you don’t want it.

If there isn’t anywhere in your home that you can put a box under cover or out of sight, just be sure that it’s a quiet area that has enough space for your cat to get in and out of the litter tray without scattering litter everywhere. Your cats’ comfort needs to be taken into account when they’re doing their bathroom business.

Wherever you do decide to put a box, don’t place it near your cat’s food or water. Cats won’t expel waste in the same place they eat or drink and you shouldn’t expect good behavior from them if you decide to do this to them.

If you’re going to set up two or more litter boxes in your household, it’s best to find a litter box that works for you and all of your cats. Two cats may be happy to share a single large litter box, but they may also prefer their own litter box. Whatever the situation, let’s look at four different litter box types that you’ll commonly come across and why they might suit your situation.

Open litter boxes are the most common type of litter box. You see them everywhere, they’re inexpensive and readily available. They also come in a huge range of sizes, though the smaller ones are more suited for kittens than fully grown adult cats.

An open litter box is any litter box that doesn’t have a top or a hood. It’s just a tray, sometimes with a “lid” that frames the box’s edges to keep litter box liners from moving once you’ve put one on the tray.

Because they’re cheaper to buy, most cat owners start out with this litter box type and don’t ever upgrade unless it’s obvious that their cat needs a different type of litter tray to be happy at home. We recommend purchasing a pet mat to go underneath open litter trays because they can stop litter from being tracked too far into your home.

If you have a cat who seems to be struggling with the lack of privacy in your home, a hooded litter box is a great solution. Cats who need more privacy may start doing their business in the corners of your home or in cardboard boxes where they can hide. It’s not unusual for cats in multi-cat households to have different toilet habits, especially if you’ve brought in a shy rescue cat.

The hooded litter box is similar to an open litter box, but it has a large cover that sits on top of the tray and includes a door that acts like a cat flap. They don’t completely stop litter tracking if that’s an issue your cats have, but they will minimize it because the door shuts behind the cat when they’re inside the box. Again, this type of litter tray would benefit from the addition of a mat.

Dog-proof litter trays are used to keep your canine out of your cat’s litter and waste. It’s possible for dogs and cats to get sick from coming into contact with contaminated waste (that would be the waste of a cat or other animal who was sick in this instance).

These litter boxes work by forcing your cat to enter from the top of the litter box, rather than the side or the front like they would for standard litter trays and boxes. Your dog won’t be able to enter the tray because dogs aren’t usually as agile as cats, so it’ll be a struggle for them to attempt it.

This type of litter box is the most expensive that you can buy for your feline friend, but it’s worth it if you have several cats and/or don’t want to spend time constantly cleaning up after them. Self-cleaning litter boxes are typically upwards of $200, and there are several versions on the market.

Some look like open litter trays but contain the mechanics for a rake to occasionally run across the litter and remove any waste into a waste disposal tray. Others look like hooded trays and do the same thing. There are some that are more complex, but we won’t go into those now.

It can be very costly to use this type of litter box in home with multiple cats because they’re such territorial creatures that they may not want to share a litter box. 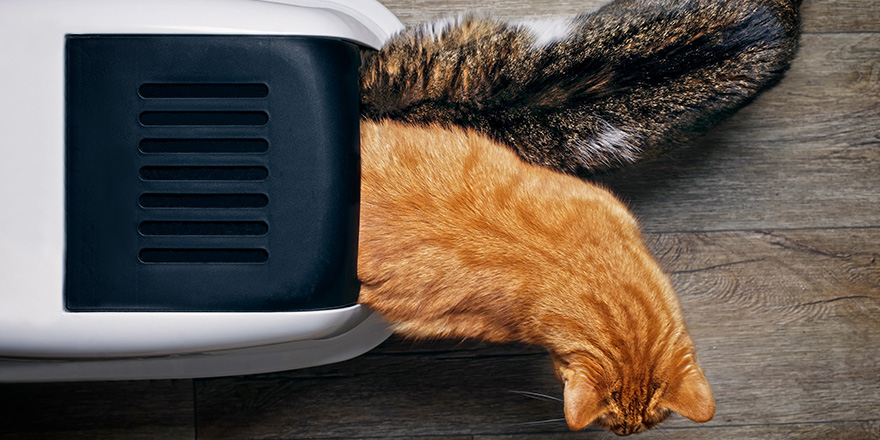 How to Stop Your Cat from Tracking Litter

Cats will spill and track litter accidentally most of the time, but there are still several ways to prevent it:

In the event that your cat isn’t tracking litter but is urinating or pooping in other areas of your house and none of the above works, we suggest seeking veterinary advice. Most cats spread waste like this when they’re angry, stressed, or upset, but there can be a medical reason.

There are several reasons that your cat may not be using their litter box. The most common is that the box is too small for them and they don't feel comfortable using it. This then causes your cat to go to the toilet next to the box or somewhere else in your home. It could also be the placement of the box or the fact that you have another cat using the same tray.

If the tray is large enough, two cats may be happy to share the same litter box. These will usually be bonded cats, such as sibling pairs, who have spent a lot of time together. The tray must be a large one to accommodate the extra usage and you must clean it out at least twice a day.

The Best Self-Cleaning Litter Boxes in 2022