By MyPetNeedsThat Staff
Last Updated August 11, 2022
Every product and service on My Pet Needs That is independently selected by our editors, contributors, and experts. If you purchase something through our links, we may earn a referral fee. Learn more

In this article, we will look at the brindle pitbull – how is it different from a standard American pit bull terrier, and is it super rare? We’ll look at their appearance, temperament, and potential health issues that you may encounter with this particular breed. More importantly, we will examine whether a brindle bully makes a good family dog!

If you’re thinking of getting a brindle pitbull puppy or already own a brindle pit bull and want to know more, read on…

What is a Brindle Pitbull?

You may or may not have heard the term “brindle” before, but for those unfamiliar, let’s clarify that the term “brindle” can apply to other breeds too. Brindle is a coloring pattern found in animals, and the brindle coat is characterized by stripes, flecks, and colors, giving the animal a pattern that can look similar to tiger stripes.

The brindle coloration is usually shown as black stripes on a red base or lighter colors such as tan and white, and brindle Pitbulls aren’t as rare as you would expect, though the reverse brindle pitbull is pretty rare as (you’ve guessed it right) the patterns on the dog’s coat are reversed.

So, what does a brindle pit bull look like? 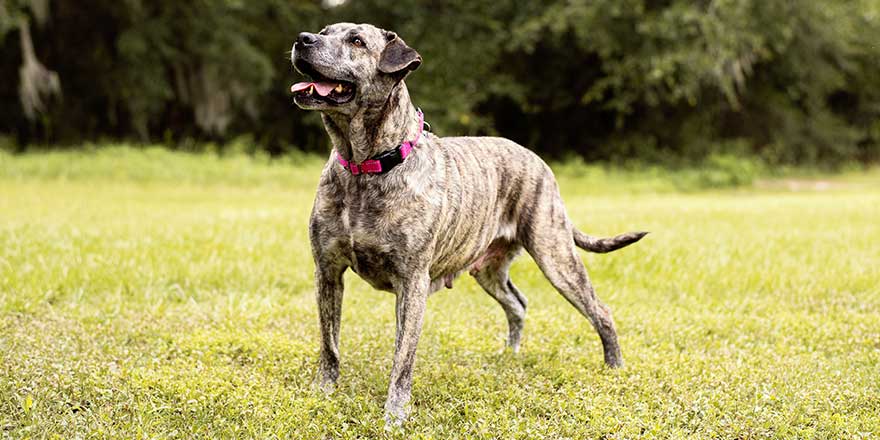 The coat of a brindle pit bull has a distinct tiger-striped coat that can vary in color. The most common base color is tan, brown, or fawn with alternating brindle markings of red and yellow or brown and black. The coat of a brindle Pittie is short and easy to keep in good condition, so if you’ve previously owned a dog such as a German shepherd or Labrador retriever, then you will no doubt find this breed of dog easier to groom as they tend to shed less and are easier to keep clean.

These dogs have a large head with a wide set jaw and short muzzle, the ears of a brindle pitbull dog are usually floppy, and the eyes are small and can vary in color from brown to amber.

The body of a brindle pitbull is strong and stocky, with a broad chest and well-developed hindquarters.

A Short History of the Brindle Pitbull 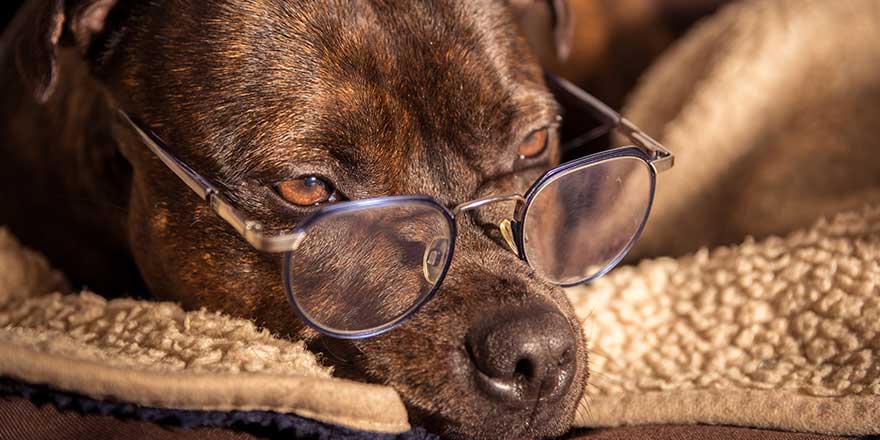 Before we talk about a brindle pitbull’s temperament, it’s important for us to first look at the reputation of the brindle pitbull and how people have viewed this dog breed over the years.

Why Do Brindle Pitbulls Have Bad Reputations?

The brindle pitbull is a variation of the pitbull breed and can often be viewed similarly. There’s a common misconception that brindle Pitbulls are aggressive dogs, and to look at why this is, we must first look at the history of the pitbull and what the dog was bred for originally.

Originating around the 1800s, pitbull dogs were bred from cold English bulldogs, where they were used for deeply unethical blood sports such as “bear baiting,” where they were made to use their powerful jaws to hold down large animals such as bears and bulls until the animals gave up with exhaustion. Bear and bull baiting were eventually outlawed, but sports such as dog fighting sadly remained.

Luckily, in the 70s, blood sports such as dog fighting were made illegal, and pit bulls were finally seen differently, not just as fighting dogs. They were recognized as a loyal companion for families and even earned themselves the nickname “nanny dog” because they were excellent around children.

Brindle pit bulls are inherently gentle dogs and have a reputation for being good worker dogs, herding stock on farms, and even becoming search and rescue dogs. 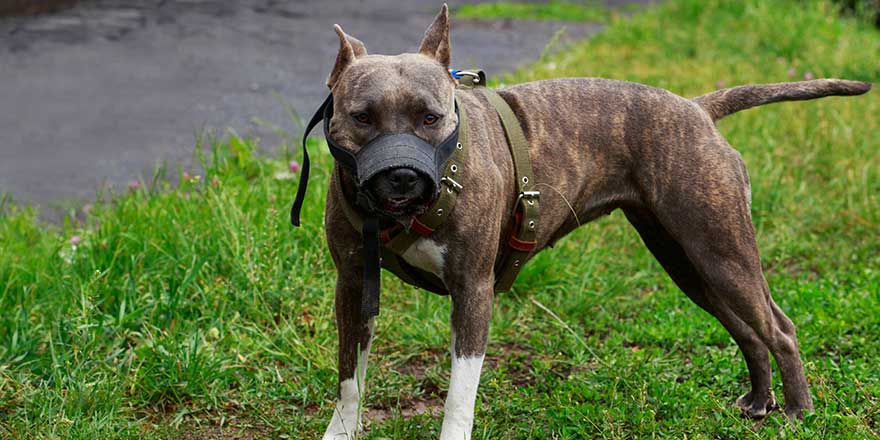 It’s important to be aware of the reputation of the brindle pitbull and how many people sadly still see this dog as aggressive and dangerous. In some countries, this breed of dog is even banned.

Ultimately any dog can be trained to become aggressive, but with the right type of training and lots of love and care, the brindle pitbull is a safe dog to own.

A brindle pitbull’s natural temperament is loving and will likely develop a strong bond with their owner. Training has to start young, however, as these dogs are also renowned for being stubborn and can display unwanted boisterous behaviors if they are not adequately trained, exercised, and entertained.

Brindle pitbull puppies can be socialized around 7-8 weeks old. You’ll need to ensure they have had their first round of vaccines and have been wormed. Socializing your brindle pit bull early ensures that your dog gets used to different environments, sights, and sounds. It’s important for them to get used to other people and animals too. As soon as your brindle pit bull gets accustomed to different noises and environments, they will no longer see them as a threat and, therefore, will be less likely to display fear and/or aggressive tendencies.

Positive reinforcement is the most effective method of training your brindle pitbull dog. When you teach them that good behavior will get them treats and toys, they will start to listen quickly!

A brindle pitbull dog will need plenty of mental and physical stimulation. You’ll need to exercise them regularly and give them a variety of toys to keep them occupied. Bored dogs tend to cause destruction around the home, so minimize this by giving them challenging games and toys specifically designed for this dog breed. 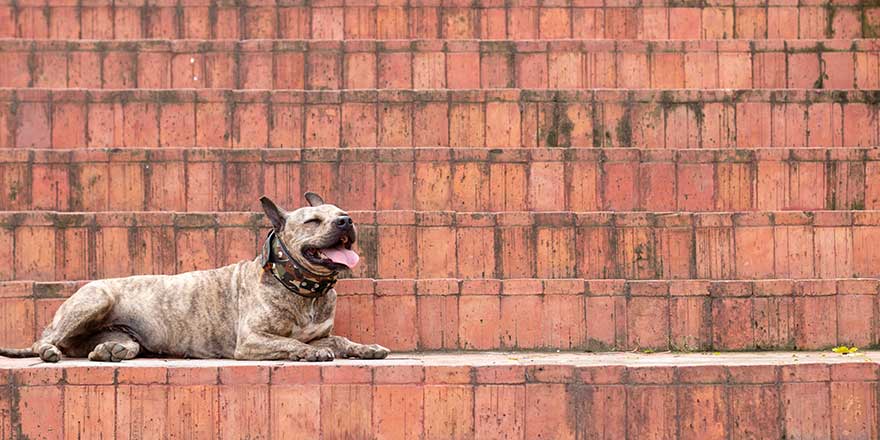 These are the most common health issues with Pitbulls:

You should always speak to a veterinarian if you suspect that your pitbull has any health conditions. 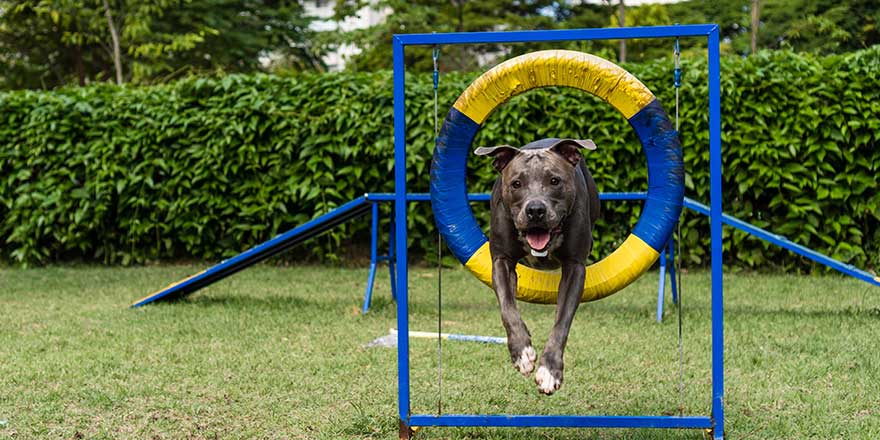 Your brindle Pittie will need a decent amount of exercise to keep him/her happy and healthy. As we have said in this article, Pitbulls can be stubborn and boisterous if they are not adequately trained and exercised.

Pitbull breeds are strong and muscular and need several walks a day. These are natural hunting dogs with lots of stamina, so you must ensure that you have the energy for this breed before buying a brindle pit bull.

Whether the pitbull breed, these dogs respond well to mixed exercise: long and short walks, play, and agility games.

It is also important to your pitbull dog leash training early, as they can be stubborn and powerful.

What should I feed my pitbull?

A pitbull is a medium-sized dog that needs high-quality food. It is recommended that your dog eats no more than two dry cups of kibble a day.

A brindle pit bull makes a great family pet with the right type of training. As with any other dog, you’ll need to ensure that you are adequately prepared to own this type of dog. Do you have a safe outdoor space for them to run around? Are you out of the house for long periods, or will the dog have company during the day?

Have you owned a dog before? If you haven’t, you will probably want to consider doggy obedience school so you can train your Pittie early to avoid unwanted behaviors.

Not only will you have to consider the physical space and time needed to own this type of dog, but the cost too. Veterinarian bills can be very costly, so decent pet insurance is important.

In summary – if you have the time, energy, money, and patience, then we are confident that your life will be truly enriched by owning this friendly, loyal companion!

Whether you are looking for a blue nose brindle pitbull, red nose brindle pitbull, or purebred pitbull, we recommend going to a reputable breeder. American pit bull terriers can be subject to health conditions at birth, so it's important to know the history of your dog's bloodline. You must always verify the breeder's reputation and identity before buying and never purchase a dog from a puppy farm. If you prefer to adopt, many reputable rescue centers provide pitbull dogs that need re-homing.

The average adult male brindle pitbull size is approximately 18-21 inches in height and around 30-60 Lb. A female pitbull dog will reach around 17-20 inches tall with a weight of around 30-50 Lb.

As with most other powerful dog breeds, this all comes down to training. Their natural nature is friendly and loyal, but unfortunately, they carry a negative reputation and are even banned in some countries today. Due to their reputation as fighting dogs, people still associate pit bulls with aggression.

Negative media coverage hasn't helped this case, though this has changed over the last few decades. With proper training from a young age, Pitbulls make great family dogs. However, we wouldn't recommend them for very small children, as they can be a little boisterous at times!

If you are looking to buy a brindle pit bull, you will have to consider different factors: not only the cost of the dog. Brindle pitbull dogs aren't the most expensive breed, but they will need high-quality food, toys, bedding, and decent pet insurance.

Your brindle pitbull puppy costs between $300 and $500. As these dogs are not rare, the cost is relatively low. If you choose a rarer breed, such as a red or blue nose brindle Pitbull, you can expect to pay anything up to $3000.

Always use a reputable breeder and make sure that you ask them plenty of questions regarding your pup's bloodline.

The Best Dog Food for Pitbulls in 2022

Dogs
The Best Toys for Pitbulls in 2022
Types of Pitbulls: Learn Their Differences

Dogs
Types of Pitbulls: Learn Their Differences
How Long do Pitbulls Live?

Dogs
Pitbull Growth Chart – When Do Pitbulls Stop Growing?
From Red and Blue to Merle – The Most Popular Colors for Pitbulls

Dogs
From Red and Blue to Merle – The Most Popular Colors for Pitbulls
Pitbull Ear Cropping – Should You Do It?

Dogs
Pitbull Ear Cropping – Should You Do It?