By MyPetNeedsThat Staff
Last Updated August 23, 2022
Every product and service on My Pet Needs That is independently selected by our editors, contributors, and experts. If you purchase something through our links, we may earn a referral fee. Learn more

A rare ‘Janus’ kitten has been born alive with two heads and named Harvey by its Arkansas owner after the fictional villain ‘Two-Face’ in Batman.

Ariel Contreras spotted the unusual feline just as her cat was giving birth. Contreras said she had been doing the laundry when she looked down after hearing her pet cat meowing.

“All of the sudden, babies started coming out, and I started yelling for my husband,” she told KYTV Friday. “This is the second one, so he came out, my husband said, ‘honey, it has two heads,’ and I went, ‘no way!”

Caused by excess protein production in the womb which produces the mutation, a kitten born with two distinct faces is an extremely rare occurrence known as a Janus cat. The name comes from the Roman god Janus, who was portrayed as having two faces. Only a handful of Janus cats are known to have been born, with most dying shortly after birth. However, the Guinness Book of World Records lists a Janus cat that was born in Massachusetts in 1999 and lived for 15 years. 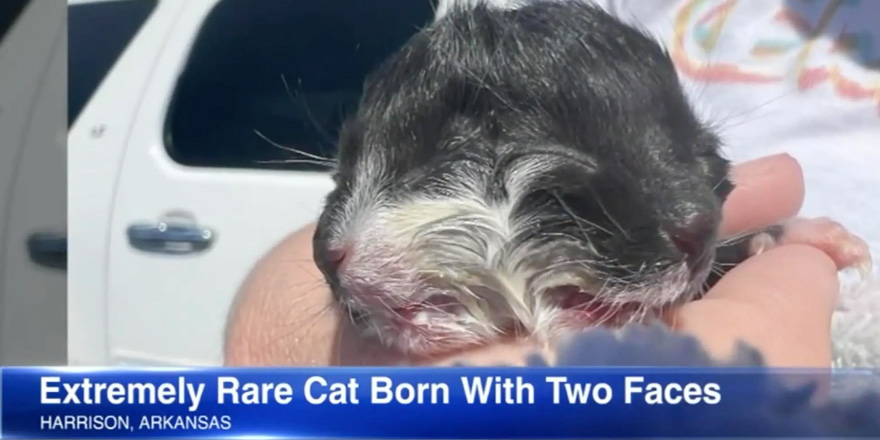 According to local reports, the rare two-faced Arkansas kit was named Harvey by the Contreras family, in a nod to the notorious Batman character, Harvey Dent, aka, supervillain, Two-Face.

The head-turning kit has since been checked over by veterinarians, who believe the two-faced animal has a good chance of surviving.

Alley Cat Animal Rescue veterinarian, Dr Tim Addis, said the kitten had one of everything except it has an extra skull, which is operating alongside the other.

“You can feed either mouth, and the kitten takes nourishment through either,” he reportedly said. “The chances of it making it are just as good as its siblings if you’re feeding it with a bottle.

“What the odds are, I don’t know. They’re hard to raise. But it will make it if the Lord’s willing,” Dr Addis added.

Harvey’s owner also believed the kitten has a good chance of survival.