By MyPetNeedsThat Staff
Last Updated July 18, 2022
Every product and service on My Pet Needs That is independently selected by our editors, contributors, and experts. If you purchase something through our links, we may earn a referral fee. Learn more

The Staggering disease has been a mystery for a huge number of years. Very recently, a large team of researchers who were examining the disease to try and find the cause of it published a paper on their findings.

What they found was that there is a virus causing this disease in cats, which has been around for almost 50 years. The Staggering disease’s notoriety grew in 2020 when it became known as the reason for the death of a capybara, a donkey, and a tree kangaroo in Germany. Until then, it was thought to primarily affect cats.

What is the Staggering Disease?

The Staggering disease is a neurological disease that causes loss of limb control, seizures, the inability to retract claws, and staggering.
It takes just two weeks for the disease to progress fully once contracted, and there is currently no known cure. In fact, there are few treatments to even ease the symptoms of the disease. It is two weeks of suffering followed by death for any cat who contracts the virus that the research team believes causes it.

The History of the Disease 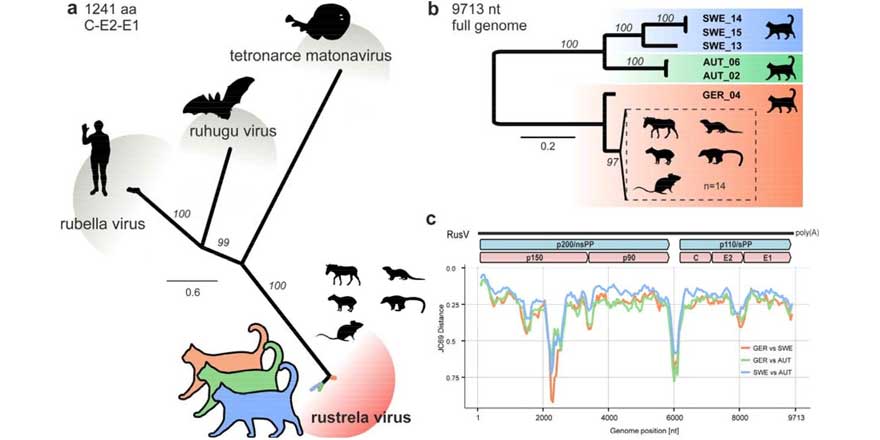 The first study of the disease suggested that it may have been related to the Borna disease virus. This virus infects warm-blooded animals but isn’t always fatal – which the staggering disease is.

After further examination, this theory was debunked, and researchers doubled their efforts to find the source of the Staggering disease that was afflicting the cats of Europe.

From their institutions in Germany, Austria, and Sweden, the collaborating team of researchers took action. They collected the brains of 29 euthanized cats across the three countries, looking for evidence of the Borna virus, but found none.
However, in during their examination, they did find the Rustrela virus in all but one of the brains.

Related to the Rubella virus which is known to affect humans, Rustrela is a recently discovered virus that is being said to be the cause of Staggering disease. Up until now, the virus was previously unknown, so there is little research beyond what has been discovered through the team spread across Germany, Austria, and Sweden.

The researchers have concluded that their findings strongly suggest that this new Rustrela virus is behind the Staggering disease that affects domestic cats and (recently) a small number of other animals.

Rustrela is often seen in wood mice, as well as cats, and may be infecting a number of other mammals without anyone being any wiser to it. It’s also possible that the virus could infect humans as well, considering that the virus is a relative to one that already causes no small amount of distress to the human body.

The Dream Cat Santuary In Hawaii With Over 500 Cats