By MyPetNeedsThat Staff
Last Updated April 27, 2022
Every product and service on My Pet Needs That is independently selected by our editors, contributors, and experts. If you purchase something through our links, we may earn a referral fee. Learn more

Palomino refers to the color of a horse, not a separate breed of horse. Almost any horse breed can produce palomino coloring if they are bred correctly. In this guide, we have uncovered and explored the history of this stunning horse hair color. Not all palomino horses share the same coat color, so we’ll be looking at several variations that exist today. To find out more about how these golden-colored horses came to be, read on and enjoy learning about chestnut brown horses that are bred to have a yellow or gold coat.

What is a Palomino Horse?

A palomino horse does not refer to a specific breed of horse. Instead, it refers to the coat color of any breed of horse that has a certain gene. This gene is genetic and can occur in horses after certain conditions are met during breeding. Breeding isn’t always going to result in the gene occurring, but if you were to breed horses that already had the creme or cream dilution gene, you would have a better chance of getting a palomino horse.

A palomino horse is a chestnut-colored horse with that dilution gene. They are genetically chestnut horses, just with different coloration.

Palomino horses can change color during the year, especially if they live in cold climates. Depending on their environment, the current season, and their diet, your palomino horse may appear to be a different color than they once were. This is perfectly natural for palomino horses of any breed.

The standard palomino will have hazel eyes, white markings on their face and/or lower legs, and a light-colored mane and tail.

There are Four Main Types of Palomino Horse 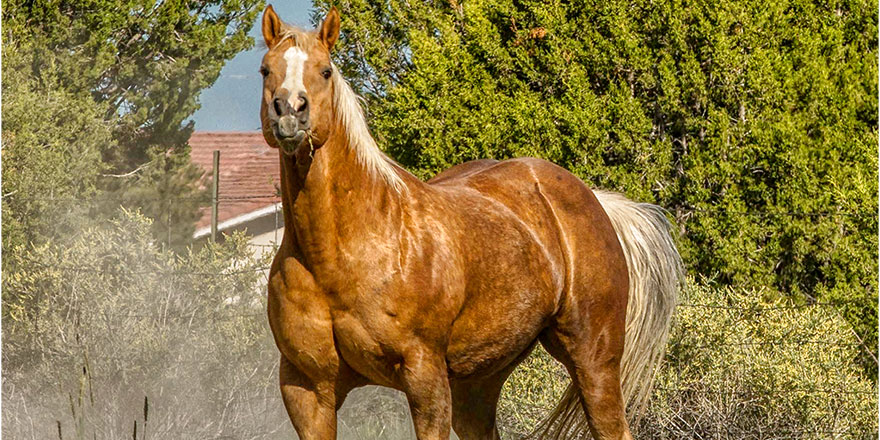 The idea behind the palomino horse was obviously to create a lighter colored or golden horse from horses of a chestnut color. It’s interesting, then, that the chocolate palomino horse exists.

Chocolate palomino horses have a dark brown coat with a white mane and tail. This is what makes them stand out from other horses. They retain that light cream or white mane from the standard golden horses but have darker coats. The contrast is extremely striking. 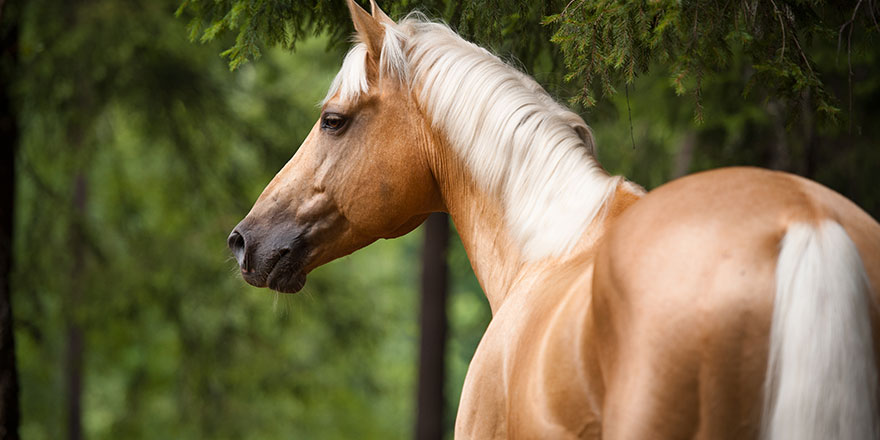 The most sought-after palomino horse coat color is the golden palomino. These horses range from yellow to dark gold and have a light flaxen mane and tail.

Golden palominos share the most desired color coat, which likely gained popularity from the first palomino horse. It’s important to remember that your golden palomino horse will have winter and summer coats which may appear to change their coloring for a time. 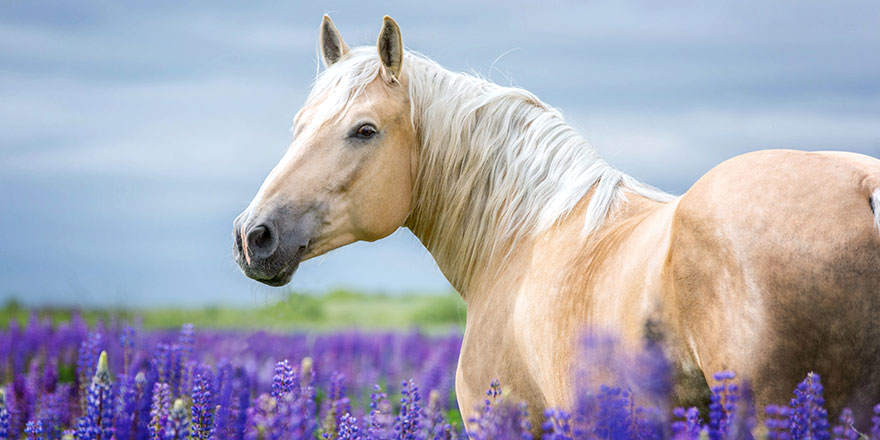 The other commonly recognized palomino horse would have a light gold coat and a white mane and tail. These light palomino horses are often confused with cremello horses, but they have brown skin instead of pink as we mentioned earlier.

The combination of brown skin and light hair gives this horse a light tan coat. It’s a great combination with their light cream mane and tail because the horse’s color flows together very nicely. 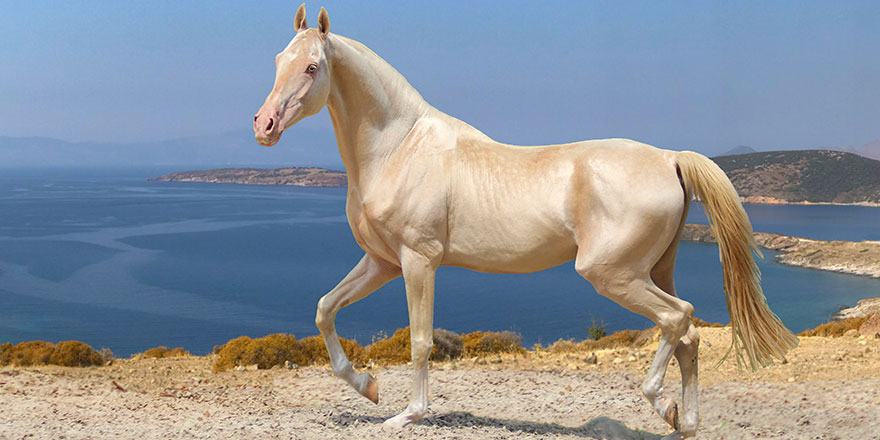 Pearl palominos exist but are often mixed up with the light or golden variation. The difference is that there is a more lustrous sheen on the light cream coat of the pearl palominos, and they have green or blue eyes.

History of the Palomino Horse Color

Having existed since at least the 16th century, the palomino horse is not a new color in the world of horses. They have been depicted in paintings, ridden by royalty, and have a firmly rooted place in horse competitions and shows.

Conquistador Juan de Palomino was known for riding a golden stallion of the palomino variety, and the horses with a palomino coat were greatly endeared to Queen Isabella during her reign. In fact, horses of the palomino color owe their population to the Spanish crown because of Queen Isabella’s love of the creatures. She had around one hundred palomino horses in her stables and ensured that those of non-noble birth could not be able to ride them.

It was also Queen Isabella who eventually introduced palomino horses to North American soil. From there, the horses’ cream gene has only expanded as more breeders attempt to produce the best looking palomino.

Where Did Palomino Horses Originate? 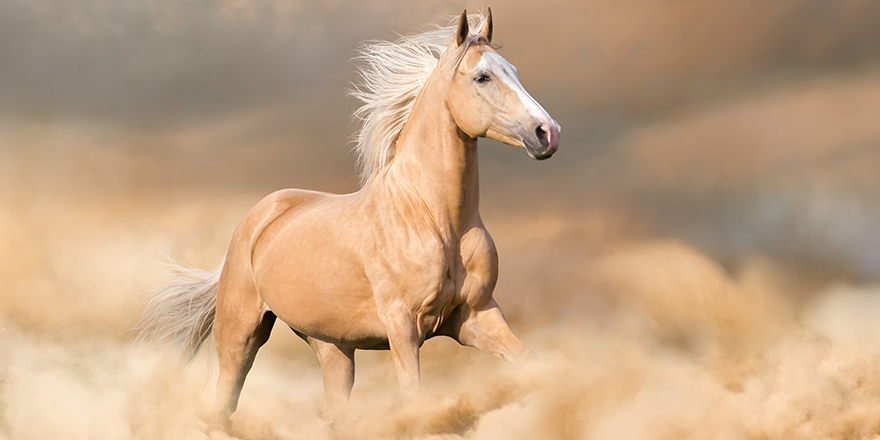 Palomino horses originated in Spain around 1519, though this is a guess at best because there are a lot of differing views on the matter. It is said that they came to be during the beginning of the Spanish New World and Cortez’s reign.

Though the exact origin of these horses is unknown, their popularity is not. Palomino horses have been bred for centuries because of their fascination with their color. They are often associated with the Royal family, nobility, and high-ranking military officials.

The Palomino Horse Association is a registry that, according to its own admission, does not discriminate against any breed. They recognize all breeds that wish to be registered, provided that they can be confirmed as palomino horses. They have horses from every breed registered with their association, and though they have their preferred ideal coat color, they will accept any palomino with the recessive gene.

Their preferred palomino color is the lighter gold color, but the shade can vary from light to dark gold. The horses’ mane and tail should be white, ivory, or silver, though they allow for 15% dark or sorrel-colored hair mixed in with the light color hair.

In recent years, they have become to accept the palomino that is creme-colored with blue eyes. Research has shown that this palomino always produces another palomino, which makes them the perfect breeding stock.

Palomino Horse Breeders of America is an incorporation that was created to collect, record, and preserve the purity of the palomino horse color. While continuing their mission, they also aim to improve the breeding of palomino horses, encourage ownership of horses of this color type, and grow their membership base.

PHBA has records of over 88,000 palomino horses and their owners, plus over a quarter of a million horse show entries that showcase the palomino from its golden shade to its darker coat color

Caring for a Palomino Horse 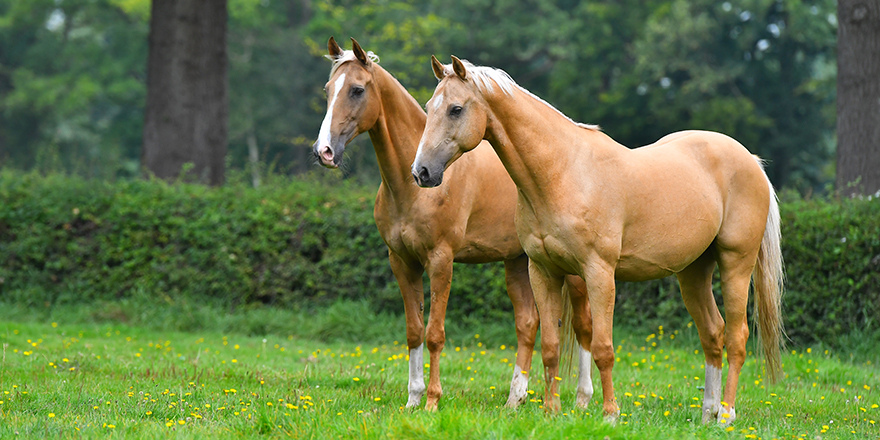 Caring for a palomino horse is no different from caring for any other horse with different coat color from the same breed. For their coat to really shine during competitions, horse owners and riders might want to spend some extra time grooming them prior to events. Their golden coat is a light color, after all, so it is more likely to attract dirt between washes.

A coat-darkening supplement may be able to add more depth to your palomino’s coat, but you risk losing the lightness of their coat if they’re a brighter color. This technique may be best for the chocolate palomino instead of any with cream or golden coats.

Other than grooming, just be sure that you’re providing your horse with enough time to run free and graze, as well as training time. An overworked horse will become stressed and sluggish, and you’ll put their health at risk. Be sure that your horse is getting regular vet check-ups, too.

As for their diet, the palomino (of any horse breed) can change color slightly depending on what they eat. To keep their gorgeous golden coat, feed them high-quality feed and horse hay.

Palomino horses are not rare, though the Pearl palomino is the rarest of the variations. You can find palominos across a huge number of horse breeds, from Quarter horses to Arabian chestnuts with the creme dilution gene. Pearl palominos are created by crossing a regular golden palomino and a liver chestnut. The result is a shiny chocolate horse with green or blue eyes instead of hazel or brown eyes.

A horse can only be labelled a palomino horse if they meet the required coloration and have the creme dilution gene that gives them that color. A true palomino must have that recessive gene, they cannot just be a light-colored horse because there are so many other breeds out there with naturally-occuring light-colored horses.

Palomino horses can change color. The color change isn't usually extreme, though some horses undergo dramatic color change when the seasons change. Diet often affects the coloration of a palomino - high protein hay or grain may darken your palomino horse's coat or cause dappling.

Though some palomino horses are born with their cream color, not all are. In fact, it's more likely that your horse will be a duller color at birth than they will be as they get older. They are a horse with a color that blossoms as they mature. Their eyes are blue-gray once they're born, but these will change to amber, hazel, or brown soon enough. Unless you have a pearl palomino, of course, in which case your palomino horse will have green or blue eyes once they get older.

Other animals
Spot the Appeal – Our In-Depth Breed Guide to the Stunning Appaloosa Horse
The Belgian Horse: Fun Facts and Breed Information