By MyPetNeedsThat Staff
Last Updated April 26, 2022
Every product and service on My Pet Needs That is independently selected by our editors, contributors, and experts. If you purchase something through our links, we may earn a referral fee. Learn more

Mongolian horses are small, strong, and durable animals with very few inhabiting our planet. They have a full, rich history as well as some unique and interesting traits that set them apart from other breeds. For example, did you know that they are more than equipped to care for themselves and withstand incredible temperatures in the wild?

If Mongol horses have captured your interest take a look at the following guide where you can learn all about their unique history, grooming needs, personalities, and their reintroduction into the wild after their near extinction in captivity. 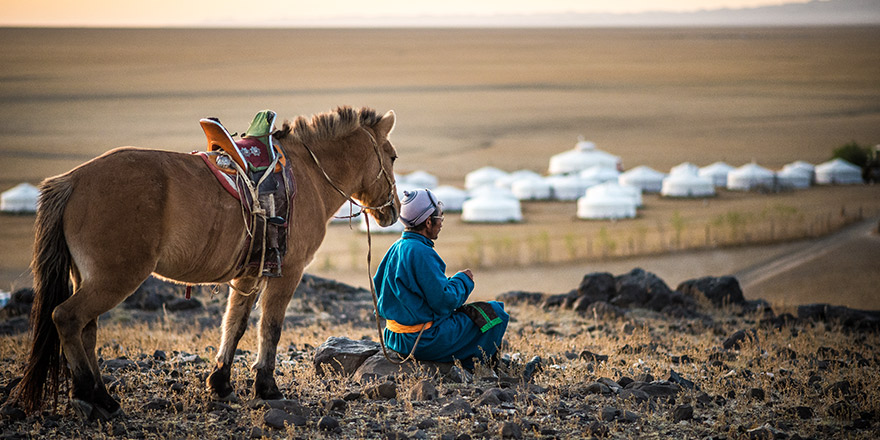 The exact origins of the Mongolian horse are unclear but sources are certain that they’ve been around for centuries and are actually one of the oldest horse breeds to date. As the Mongol horse has been around for such a long time, they have heavily impacted the breeds we know and love today. This includes the influence of horses from Iceland, the British Isles, Central Europe, and even Scandinavian breeds.

Interestingly, it is said that Mongal horses have been documented since 2000 BC and have frequently been noted as riding horses and transporting animals.

A Valued Tool Used in Battle

Mongolian horses played an integral part in wars during the 13th century. Notably, these horses were favored by Genghis Khan who used a Mongol horse as a war steed.

Mongol horses provided more than just a back to sit on, they were immensely durable, energetic, and had a great talent for finding food independently. Moreover, they provided soldiers with milk and meat. It is also said Genghis Khan prayed to the mountains using a mare’s milk.

The only drawback Mongols had was that they weren’t as fast as other horse breeds but they made up for this with their other defining attributes. Not only were they steeds and offered meat, milk, and hair, but they were also incredibly loyal to soldiers.

Although these horses have been around for centuries, they are still not recognized as an official breed. Also, since Mongol wild horses have almost been driven to near extinction, they are considered endangered. In recent years, efforts have been installed to help reintroduce the species into the wild after they were declared extinct in their native habitat and their numbers dwindled in captivity.

Today, you may know the Mongolian wild horse as ‘Przewalski’s horse’ having been named after Russian explorer N.M. Przewalski. During the 19th century, Przewalski named the species after finding and presenting a rare skull and hide of the horse to a St. Petersburg museum.

Below you can find a plethora of information regarding the temperament and grooming needs of a Mongolian horse. In addition to this, we have provided some more facts about their diet and coat colorations.

To a complete stranger, Mongolian domesticated horses are described as hardy and inspiringly valiant. To those who have formed a bond with Mongolian horses, they are regarded as gentle creatures with a loyalty to those they are close to.

So for those wanting to get themselves a Mongol horse, patience is key. Before you have bonded with the animal, they may appear aloof and somewhat wary of you. However, as time passes you will form a strong bond and the horse will become more and more affectionate if the right steps are taken.

In addition to this, Mongol horses are said to be highly intelligent animals and will take to horse training very well. However, a lot of these wild horses retain innate wild behavior and can be difficult to approach and bond with.

Often, these horses are mistaken for ponies due to their smaller frame compared to other horses. The Mongol horse is short and stocky with immensely strong hooves. They tend to have a large head, short neck, and strong, short legs.

When compared to other breeds, Mongolian horses tend to weigh anywhere between 500 and 600 pounds whereas most horses weigh between 900 to 2000 pounds. Also, they can stand anywhere between 48 to 56 inches tall (12 to 14 hands). Moreover, the horse has a cannon bone external circumference of around eight inches.

Mongolian horses can appear in a wide range of coat colors and patterns including beige, dark brown, roan, white, brown, dun, back, shun, and gray. It’s completely common for Mongol horses to have a lighter muzzle and stomach, with a single color covering the rest of the body. Their mane may also be a different color which is typically darker than the base color across the body.

More often than not, the mane will stand somewhat firm. You can sometimes find Mongol horses with finer manes but they mostly stand erect. Throughout history, it is said that the Mongol horse’s hair was taken and used to string instruments as it’s known to be particularly strong and durable.

Fun Fact: Mongolians don’t generally refer to their horses by name. Instead, they will know them by their markings, coat color, or other defining physical traits such as scars or brands. To add; there are over 500 words to describe the attributes of horses and 250 words to refer to colorings and patterns in the Mongolian language. 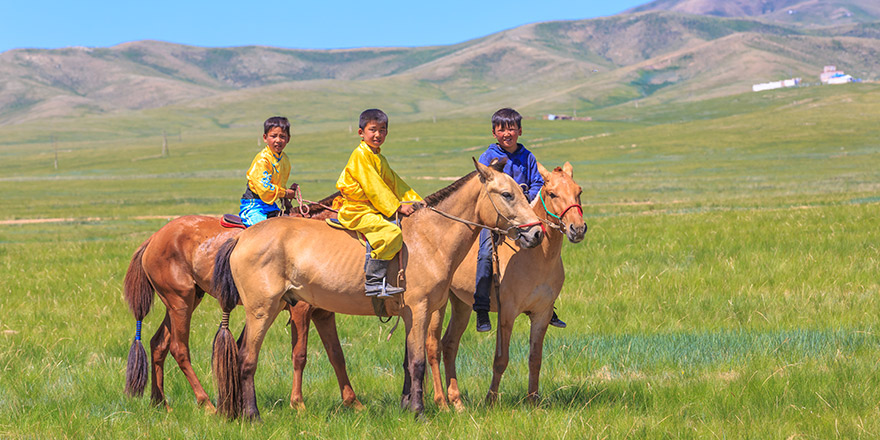 These horses are renowned for being independent creatures that can fend for and take care of themselves in the wild. However, if you’re hoping to be a proud owner of a Mongolian horse, it’s important that you still maintain their appearance and ensure that they get the best nutrition. A healthy horse is a happy horse and spending the time to care for them will only strengthen the bond between them and their owner.

Wild Mongol horses are talented at keeping themselves fed when roaming free. They tend to graze and consume around 13 pounds of grass but can also survive on plants, trees, shrubs, and sometimes tree bark. They spend a considerable amount of time searching for rivers or lakes to drink from but can also eat snow to stay hydrated.

For more details about the best diet for your horse, take a look at this article here.

Since Mongolian horses live outdoors and thrive best in the wild, there isn’t a lot to be done to groom them. Having said that, there will be a certain amount of dirt and grit that will embed in their thick coat so it will be worth investing in some tools to help release debris and dead hair.

Common Grooming Tools to Use:

You may also want to make sure that they stay clean by hosing them down regularly. You can also incorporate a gentle shampoo specifically for horses to help refresh the coat during hosing.

When grooming a Mongolian horse it’s important to also check for injuries and infections as well as clean vulnerable areas such as their eyes and ears. For this, you can simply use a soft damp cloth to remove the dirt. Make sure you also check the hooves for injury when you’re tending to them.

Although these horses can handle extreme temperatures, and rough terrain, and have generally been around for a long time, they are not invincible.
Amongst general horse conditions, the Mongolian horse is likely to be affected by the following:

Colic: Colic often suggests a troubling underlying health problem. Typically, it creates abdominal pain and can be a sign of further gastrointestinal problems. This condition is rare but worth looking out for if you own a Mongolian horse. Usually, this can be avoided if your horse has access to plenty of water and a good diet.

Laminitis: Many horses can develop laminitis which is when the soft tissue on the horse’s feet becomes inflamed. This can be spotted if your horse has difficulty standing, walking, or running. Laminitis can be avoided if you implement great hoof care and keep a watch on their weight. Moreover, a good diet can also help to stave this off.

An Added Note: It is also speculated that the wild native breed was seriously affected by an extreme winter during the early 2000s and that the result on their health was worrisome. Sources claim that they are now more likely to develop infections as well as suffer from exhaustion, pneumonia, and even stillbirths. However, the sturdy and powerful horse seems to retain good overall health and the efforts made by conservation societies are working together to ensure they are healthy and only grow in numbers.

Sadly, there are little to no breeders in the US that breed and sell Mongolian horses. The majority are, of course, located in Mongolia and they may be difficult to obtain there too as they are not bred for commercial use, unlike many horses in western culture. However, there are breeds that are often likened to them such as the Fjord and Icelandic horse.

Looking for any horse breed can be a difficult task so we’ve listed a couple of resources below to help:

If you’re looking to buy a horse, take a look at this helpful guide to ensure you are prepared and avoid the common pitfalls. 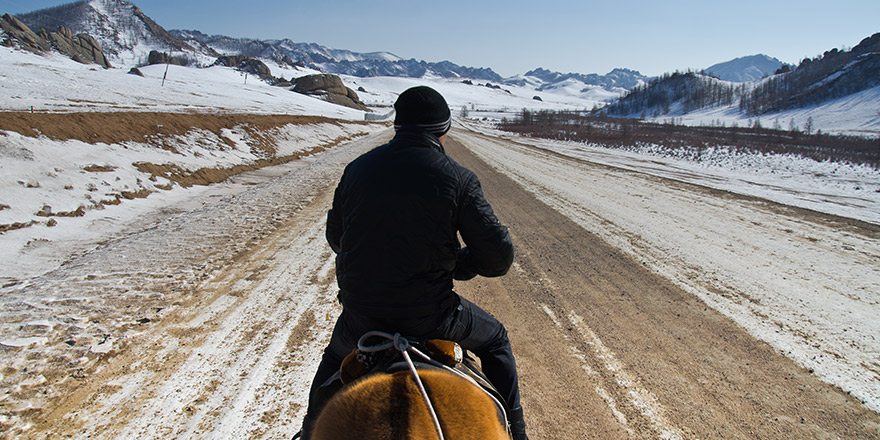 Currently, there are around 2000 Mongol horses in the world and they have recently been moved to endangered from critically endangered on the IUCN Red List during the 2010s.
Around 300 of these are feral horses that are occasionally captured by Mongolian nomads.

The Mongol horse population was previously dangerously small due to the loss of genetic diversity. Inbreeding meant that there was a lack of foals born, and many died young. In addition to this, breeding dwindled due to their years in captivity as they were unfortunately not given adequate care, habitats, or socialization.

The Foundation for the Preservation & Protection of the Przewalski Horse has been an integral part of increasing Mongolian horse numbers in recent years. During the 1970s the founders established the organization and helped to form breeding programs and reintroduce the horse back into the wild from captivity. Numbers increased and are expected to continue to do so since they now live in their natural habitat and are rekindling their innate wild instincts.

The Russian Geographical Society is also making efforts to increase population numbers by establishing a reintroduction center as well as a research center. Essentially, their goal is to reach the original population size in the horse’s native habitat.

So the good news is, that this beautiful horse breed is not on its way out and is continuing to thrive and grow in number thanks to dedicated organizations such as the FPPPH and so many more.

For more about horses, take a look at our horse archive available here.

Other animals
The Belgian Horse: Fun Facts and Breed Information