By MyPetNeedsThat Staff
Last Updated April 21, 2022
Every product and service on My Pet Needs That is independently selected by our editors, contributors, and experts. If you purchase something through our links, we may earn a referral fee. Learn more

Strikingly majestic, the Andalusian is the ultimate ‘war horse’, and its likeness has been portrayed throughout history as a symbol of power, from ancient Greece to William the Conqueror. This powerful breed has also been the choice of Royal nobility. But the Andalusian horse we recognize today dates back to the Iberian peninsula of Spain where it was first recognized as a distinct purebred breed in the 15th Century.

Today, this magnificent and versatile equine commands a high price and is prized as a competition horse. We look a little deeper to discover why as the noblest horse, the Andalusian remains a hugely popular horse breed.

History of the Andalusian 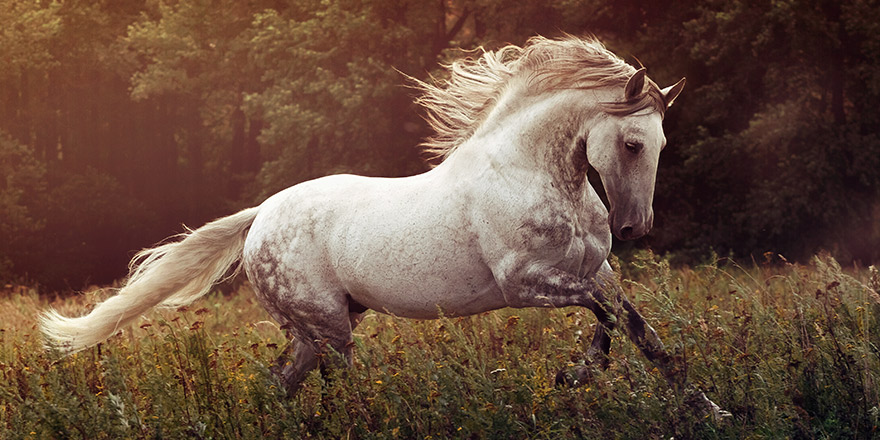 Powerful yet strikingly elegant, the Andalusian was first recognized as a breed in the 15th Century, and is a closely related to the Lusitano from Portugal. The purest type of the pura raza Española is the Carthusian, which was bred by the Carthusian monks in the late middle ages. A strain of the Andalusian breed, the Carthusian has one of the world’s oldest stud books and can command the highest prices.

Throughout its history, the Andalusian has been prized by the nobility and was renowned for its presence as a calvary horse.  Used by the Spanish government in diplomacy, the Iberian war horse was also owned and ridden by royalty across Europe from the Middle Ages. Even the English King Henry VIII had a couple of Andalusians in his royal stables.

However, the 19th Century saw a decline in the Andalusian population, due to disease, warfare, and crossbreeding with breeding stock numbers across the Iberian Peninsula reduced dramatically by the early 20th Century. This resulted in severe restrictions in the modern Andalusian breed being exported from Spain, which lasted until the 1960s.  Eventually a healthy recovery in numbers opened exports back up and today it is thought that there are over 185,000 registered purebred Andalusian horses around the world.

Bred principally as a war horse that was also used for bullfighting and driving, the Andalusian has also undergone a re-invention and today will be seen in high level equestrian sports such as classical dressage and showjumping as well as a versatile pleasure horse.

This purebred Spanish horse has also influenced other breeds throughout its history, including the Hanoverian, the Friesian, the Lipizzaner, and the American Quarter Horse.

There are several registration bodies for the purebred Andalusian around the world. In its native country, Spain, the breed is protected with the Spanish Military responsible for preserving its purity. The Spanish Ministry of Defense maintains the country’s Andalusian studbook and only approved animals from purebred Spanish horse breeders are allowed to be recorded.

In the US, the International Andalusian and Lusitano Horse Association (IALHA) is recognized by Spain as the group responsible for maintaining the purity of Andalusian breed in the States. Any horse registered by the IALHA must be traced back to Spanish or Portuguese ancestry, with DNA profiling often used. The popularity of the pure Spanish horse has grown over recent years. Just 20 years ago, there were only a couple of thousand Andalusians registered in the US. Today, this figure is over 11,000.

It has also long been a tradition in Spain for only male horses to be ridden, with the Andalusian mare just used for breeding. This means the Andalusian stallion or gelding make up the higher proportion of Andalusians used for working or riding, especially in the competition ring. 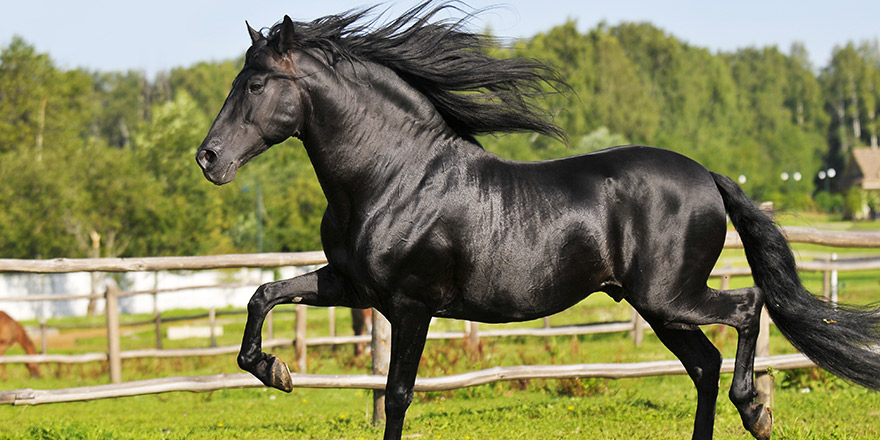 The Andalusian is a strong and compact horse, with an average height of around 15.2 hands. But with his muscular body and distinctive thick neck, this Spanish horse gives the sense of a much bigger animal. To be recognized as ‘elite stock’, Andalusian mares need to be at least 15 ¼ hands while stallions should reach 15.1 hands or more.

Despite his stature, the Andalusian is an elegant equine, with a natural elevated movement that means they can excel in the sport of dressage. And their characteristic long flowing mane, forelock, and tail as well as muscular neck and chest means the Andalusian is a very handsome horse indeed.

When it comes to riding an Andalusian, they have a beautiful forward movement which, coupled with their switched-on brain, make them a joy for the more experienced equestrian to train and ride. In addition to dressage, the Andalusian horse also excels in show jumping and long-distance events as well as trail and Western pleasure rides. However, they can be a sensitive mount that requires patience, kindness and understanding to bring out their best.

The historic Iberian horse was originally known for having a coat in many colors but over the centuries these have been refined and reduced. Today, the most common recognized coat colors for the purebred Andalusian are gray or bay, although black, dun, chestnut and palomino are also accepted as Andalusian horse colors. Buckskin, pearl, or cremello are considered rare but can also be registered. Eighty percent of Andalusians registered with the International Andalusian and Lusitano Horse Association today are gray. The presence of white patches on the body, or excessive white on the head or legs are not accepted by the PRE registry.

While Andalusians have a fine short coat and do not have excessive feathering, regular grooming is essential due to their luxuriously long, thick, and flowing mane and tail.

Known to be ‘good doers’, the Andalusian horse is a generally healthy horse that can maintain a good weight on regular feed. However, they are prone to some health conditions, some related to overfeeding. The health issues to be aware of in the Andalusian include:

Intestinal issues – studies have shown that the Andalusian horse experiences reduced blood flow (ischemic) diseases of the small intestine at a higher rate than many other breeds. Andalusian stallions in particular are 30 times more at risk of inguinal hernias which affect their scrotal area.

Laminitis – as they are prone to intestinal issues, Andalusians are also at a higher risk of developing laminitis. This is a painful hoof condition that can be caused by stress or overeating and requires a long-term treatment plan.

Metabolic conditions – Andalusians, especially as they age, are also prone to metabolic issues such as Cushing’s disease. This condition is caused by an imbalance of hormones produced by the pituitary gland and commonly affects animals over the age of 15.

Melanomas – with gray being the most common color for purebred Spanish horses, the lighter skin on these horses is more prone to skin cancer, or melanomas, especially around the muzzle and tail. Adequate sun protection and shelter, as well as regular checks are advised if your Andalusian could be at risk.

Cracked heels – the Andalusian has a sizeable hoof with the angle of the pastern bone larger than many other horse breeds. This means they can be prone to issues with quarter cracks and contracted heels if their hooves are not trimmed correctly by an appropriately experienced farrier.

To maintain the health of your Andalusian, it is best to schedule preventative vet checks at least once a year and ensure your horse is a healthy weight and always up to date with their vaccine and worming programs.

As we have seen, the noble Andalusian is a very versatile breed that can excel at a host of equine sports. Back in their native Iberia, these beautiful horses were originally bred for stamina and athleticism and for centuries were used for driving, bullfighting, and classical dressage, as well as for calvary and stock horses. This heritage means the Andalusian is highly prized today as dressage and show jumping horses, often making Olympic standard competition horses with the United States Equestrian Federation. Their turn of speed also makes the Andalusian a good racing horse, especially in long-distance and endurance events.

Away from the competitive arena, the talented Andalusian can turn its hoof to a host of equine activities. Their maneuverability and speed make them excellent Western pleasure horses and their stamina and forward movement means they can be a joy to own as a general trail and everyday riding horse. They are also prized as advanced riding horses in riding academies and can excel in working equitation. That said, their power, quick mind and energy means they are not generally the ideal first horse as they need a rider with more experience and confidence to bring out their gorgeous best.

Why Choose an Andalusian Horse 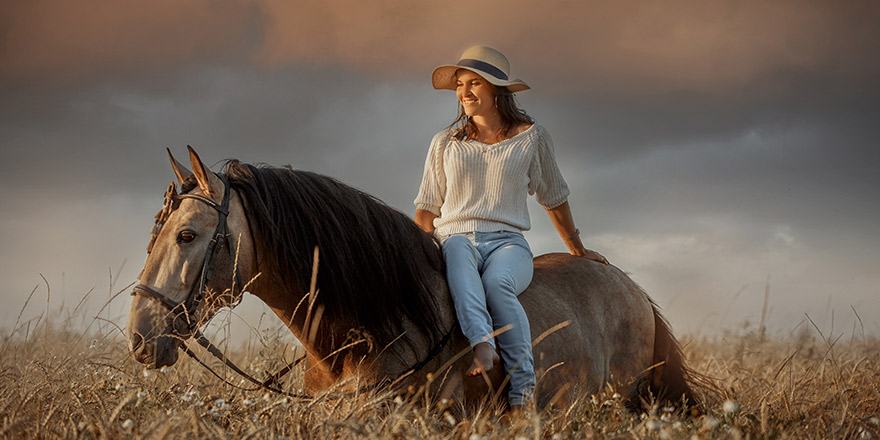 If you have reasonable riding and horse care experience and are looking for a versatile and sporty equine to call your own, then the Andalusian can be a natural fit.

With gorgeous manners on the ground and a quick wit, the Andalusian is also renowned for its smooth forward movement, making it the ideal competition or leisure horse for intermediate riders and above.

However, for all this talent, breeding, and attitude you can expect to pay a premium price as the Andalusian is an expensive horse to buy.  The price for purebred Andalusian horses registered with the International Andalusian and Lusitano Horse Association typically start at the $10k mark and you then need to factor the ongoing care costs of this large animal.

As they are an in-demand breed, the Andalusian horses rarely turn up as a rescue so you should expect to pay a premium for the perfect horse. But if your budget doesn’t quite stretch to the full pure breed, there are some wonderful Andalusian crosses you could consider. These include the Azteca (a cross between the Andalusian and an American Quarter Horse), the Iberian Warmblood, the Warlander (Friesian and Andalusian cross) and the Hispano-Arabe (Spanish x Arabian).

On paper, the Andalusian is well-mannered, intelligent, and generally willing and easy to do. However, their physical presence, and spirited personality typical of Spanish horses means they are not the best choice for a horse beginner. And this is because Andalusians tend to be too much for an inexperienced rider to handle.

With their quick brain, the Andalusian needs a job to do and can get bored easily, leading to them often testing out their rider. They can also be a little sensitive and so will need to take confidence from their human. This means that while they can be too much for the beginner, the Andalusian horse can make an awesome ride for the more experienced or competition rider.

With its heritage as a pure Spanish horse breed, the Andalusian is a premium equine. In fact, it is one of the most expensive breeds in the world. A registered purebred Andalusian foal can set you back at least $4,500, with an adult Andalusian starting at around $10,000. However, the purest lines and performance horses come with more of an eyewatering price tag, with $50-$60,000 not unusual.

Taking into account the physical size of these animals, the average lifespan of a healthy Andalusian horse is around 25 years, although it is possible for the breed to live longer.

The Andalusian horse is considered to be one of the fastest horse breeds, with studies showing that they can run 55mph over a quarter-mile course.  But it is not just the speed of this Spanish horse that is impressive, but also their physical athleticism, which gives them a wide range of movements. Add in stamina and strength and the Andalusian horse is an absolute equine athlete when working at the top of its game.

Other animals
The Belgian Horse: Fun Facts and Breed Information
How to Shoe a Horse

Other animals
How to Shoe a Horse