By Eloise Hands
Last Updated March 23, 2022
Every product and service on My Pet Needs That is independently selected by our editors, contributors, and experts. If you purchase something through our links, we may earn a referral fee. Learn more

The Belgian draft horse is a stunning, powerful creature. Best known as one of the largest horse breeds in the world, they are hard-working, strong, and awe-inspiring. For anyone thinking of getting a Belgian draft horse, or for any that is simply a lover of the breed, we’ve put together a helpful guide to draft horses, including fun facts, a little history of the breed, and general care information from which you can gain a basic understanding of what it takes to own one of these majestic creatures.

As the name suggests, the Belgian graft horse originated in Belgium and is the result of breeding the Flemish horse with the Brabant horse. Interestingly, history suggests that this magnificent breed is a direct descendant of the medieval “great horse”. A great horse will have been used to carry knights, with all of their heavy armor, into battle in the middle ages.

Much like the Belgian Heavy draft horse, they were bred for strength and resistance, in order to be the best workers they can be during the industrial revolution. This was at a time when demand on all resources was growing exponentially making both farm and industry labor far more intensive. 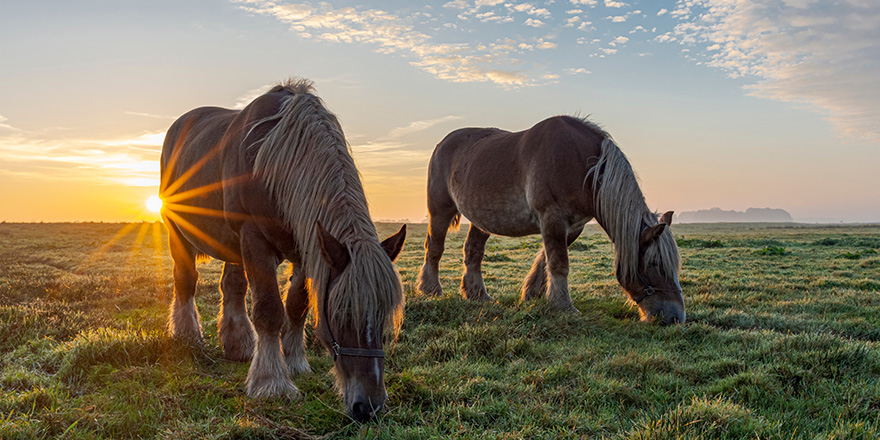 The Belgian Draft Horse Corporation of America was founded in 1887 to act as a registry and provider of breed standards for the Belgian Horse. They also maintain records of importation and dependency to ensure the pure breeds remain as such.

In 1891 Belgium had already started exporting stallions to various countries around the world including France, Russia, Italy, Germany, America, and the old Austria-Hungary empire. This was quickly followed by an international livestock exposition being sent to Chicago in 1903 which led to a significant shift in what the Americans deemed to be the right breed for farming.

With Belgian drafts becoming increasingly popular, demand for the breed was at an all-time high. However, importation was brought to an abrupt stop in 1914 with the onset of World War I which resulted in American Belgian breeders developing their own version of the Belgian draft.

The Breed Gets Split

The events of World War II along with the common use of internal combustion engines in place of horses meant that the need for a Belgian Horse was quickly dwindling. Fortunately, lovers of the breed sought to protect it – sticking with breed specifications and strict breeding routines to ensure its continuation. At this time the breed was split into two: the American Belgian horse, and the Brabant European Belgian horse.

So here’s some general information that may find interesting or even useful for anyone interested in owning a Belgian draft (aka cheval de trait belge), including appearance, exercise requirements, and health:

Belgian draft horses are heavy horses (built for pulling carriages) that were carefully bred to maintain their mass and strength through the years. Not to be confused for the Brabant European Belgian, American Belgians were developed with the American breeder’s own style in mind. The following features are how Belgians are expected to look nowadays:

When Belgian importation was limited at the start of WWII American association breeders took it upon themselves to continue the breeding of this gentle giant, subtly changing its physical characteristics and forming what we now know to be the Belgian draft (where the original became known as the Brabant European Belgian).

Belgian drafts are thought of as gentle giants. They’re kind-hearted, loyal, and self-aware. Furthermore, a lot of Belgian owners have expressed that their equine pal has shown a fantastic sense of humor and big personality to match their exceptionally large frame, making them super fun horses to spend time around.

Last but not least, they’re extremely intelligent which comes in handy for anyone looking to teach their horse a few tricks. Though this intelligence can sometimes make them stubborn, so anyone thinking of owning a Belgian draft needs to be confident and capable of wrangling them when they become argumentative. 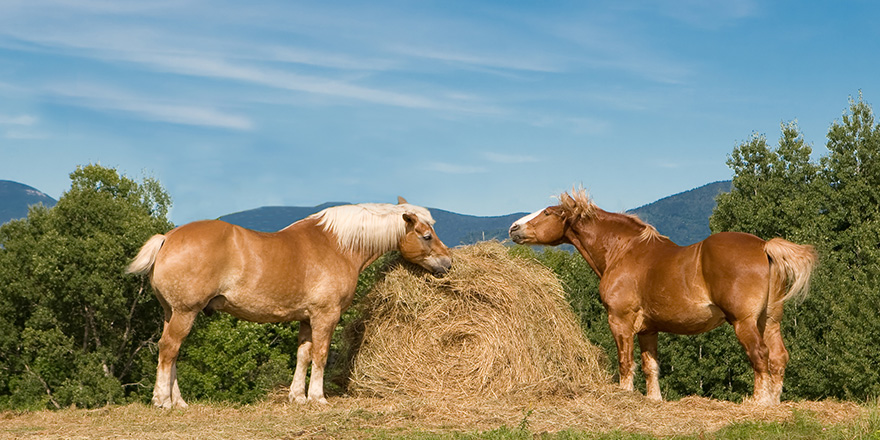 The Health of Belgian Draft Horses

Unfortunately, there are quite a few health issues that tend to affect draft horse breeds – some more serious than others. The most common conditions are listed below:

Something that more often begins to affect the horse in early adulthood (though symptoms can occur at any age). EPSM is a condition in which a draft horse is unable to metabolize carbohydrates properly, which means they’re unable to gain the proper energy from the food that they eat. Symptoms of EPSM include:

Belgian draft horses can, unfortunately, be born with an inherited genetic disorder known as Junctional epidermolysis bullosa (JEB). This is a progressive condition that affects the skin. It also goes by a series of other names: red foot disease, epitheliogenesis imperfecta (EI), and hairless foal syndrome.

JEB is caused by a recessive gene and affects the pressure points of the body, getting worse with time and exposing the horse to infections, with foals being particularly vulnerable. Sadly, many foals either die from infection or are euthanized at only a few days old as a result of this condition. Symptoms of JEB include:

Also known as Monday Morning disease or Azoturia, Rhabdomyolysis is characterized by muscle breaking down into the urine after muscle damage has occurred. It’s believed to be linked to EPSM and so any horse diagnosed with Rhabdomyolysis is usually recommended to be tested for EPSM as well. both of which require a change of diet.

Usually affecting the hind legs and tail, this is a neuromuscular disease. The cause of Shivers is currently unknown and there is no treatment, however, lessening stress on the horse can help to relieve the symptoms as they are better when relaxed. Symptoms include: 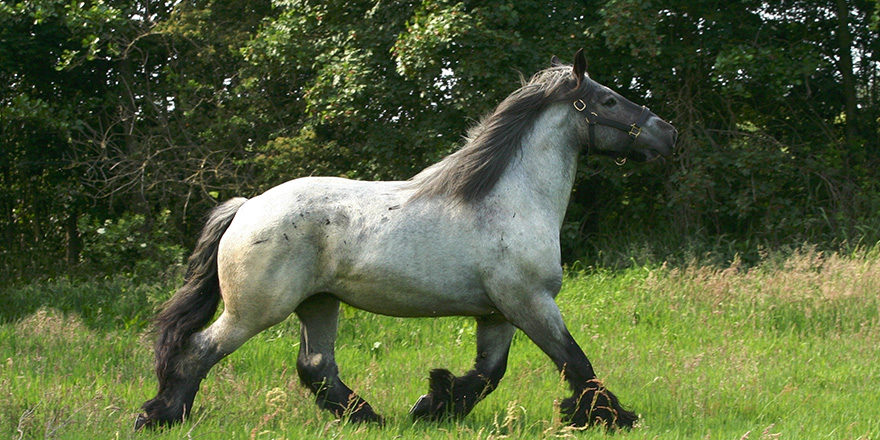 Sadly, if severely affected, this condition can shorten the lifespan or lead to necessary euthanization. CPL causes severe enlarging of the lower limbs that affects mobility and can cause discomfort or even pain. Symptoms include:

This is when squamous cell carcinoma tumors grow on the eye and eyelids. Additionally, draft horses are susceptible to cataracts as they get older.

Check out our latest article if you want to learn more about the Mongolian Horse.

Not really; they're about the same. Where Belgian draft horses typically stand around 66-70 inches tall, Clydesdales stand at around the same height, between 63-70 inches. Interestingly, the world's tallest horse was a Belgian draft that went by the name Big Jake. He was born in 2001 and measured 82.75 inches as his maximum height. Unfortunately, he passed away in June 2021 at the age of 20.

Belgian horses get their name the "Belgian draft" horse from their history as draft workers. This means they were used for heavy work such as logging, plowing, carriage pulling, sleighs, and hitches. Interestingly, they are still used for draft work to this day due to their tremendous power and size. However, riding a Belgian Horse is growing in popularity.

Purebred Belgian draft horses are exceptionally large creatures, not only due to their height but also their mass. They were intentionally bred to their size today to make them more capable of doing the heavy-duty tasks they were required to do. Of course, they didn't start as big as they are, but decades of selective breeding have resulted in their current size.

Not including shelter, food, and the general care of the horse, a Belgian horse can cost between $5-10,000, with some even going as high as $13,000. The price greatly depends on the health, parentage, size, girth, color, age, and behavior of the horse in question. We would recommend any person thinking of owning a Belgian horse takes the time to thoroughly discuss the horse with the breeder before committing to payment.

Why Do Horses Need Shoes?

Other animals
Why Do Horses Need Shoes?
How to Shoe a Horse

Other animals
How to Buy a Horse Avoiding the Common Pitfalls
The Lowdown on the Equine Diet – What Do Horses Eat?

Other animals
The Lowdown on the Equine Diet – What Do Horses Eat?