By MyPetNeedsThat Staff
Last Updated March 24, 2022
Every product and service on My Pet Needs That is independently selected by our editors, contributors, and experts. If you purchase something through our links, we may earn a referral fee. Learn more

Often recognized from Budwiser adverts, Clydesdale horses are elegant heavy horses with a rich history. Of all the horse breeds out there, Clydesdales have some of the biggest feet, and there are very few large horse breeds that are bigger than them. In this guide, we endeavor to uncover the history and modern uses of these horses, whether for general knowledge or for upcoming breed owners to know more about them. 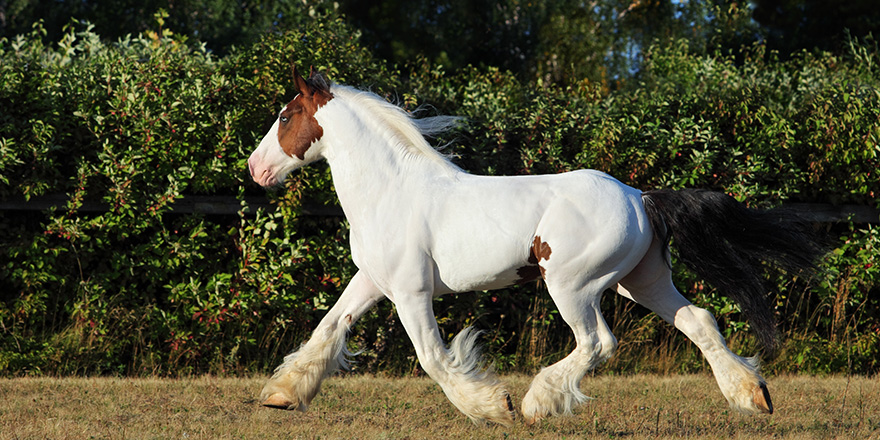 The horse we know today as a Clydesdale didn’t always look the way it does now. In the early 20th century, the horse was more compact and wouldn’t become a taller breed until selected breeding during the 1940s. That said, this heavy horse was still quite large even before the next round of breeding, only being smaller than the Shire, Percheron, and Belgian horse breeds.

Today’s Clydesdales are some of the most elegant heavy horses, standing between 162cm and 183cm and weighing up to 2000 pounds. They have a broad forehead, a wide muzzle and are extremely well-muscled. In addition, this strong breed is recognized for its wide hooves, which can be as big as dinner plates – even their horseshoes weigh around 5 pounds.

Common colors for this horse breed include:

A fully white Clydesdale is very rare, but you may see Clydesdales with large patches of white and a few smaller patches of color. There are also horses from this heavy horse breed that are almost dappled grey and white, which is a superb combination.

Pure white Clydesdale horses will usually have blonde or platinum hair for their mane and tail and may still have some darker, almost gray, patches of hair on their body.

History of the Clydesdale Horse

We mentioned that Clydesdales are used in Budweiser commercials. Still, the history of these draught horses goes back much further than being the star of a brewing company’s commercials and promotional material.

The Clydesdale breed began its life in Clydesdale, Scotland, back in the 18th century. After Flemish stallions were imported to Scotland, they were bred with local Scottish mares, but that wasn’t the end of the creation of this breed. In the next century, Shire horses were added into the mix, and the first use of the breed’s name is recorded as being used in 1826. They originally bred Clydesdales to be draught horses, a type of horse often used for labor on farms. But that wasn’t all these horses were used for!

The reference to the name of these taller horses was made at an exhibition in Glasgow, where the breed was showcased. However, there were many other chances for Clydesdales to be shown off throughout the years, according to written records that date back to 1837 that talk of hiring stallions between Scottish districts. This system included breed shows to choose the best stallion, where the winner would be taken to local mares to be bred.

By 1840, after much crossbreeding, there was no difference between Scottish draught horses and Clydesdales. Some 30 years later, the Clydesdale Horse Society of Scotland was born, quickly followed by the American Clydesdale Association (which would be renamed the “Clydesdale Breeders of the USA” later on).

Two breeders are responsible for the creation of the Clydesdale breed. These are John Paterson of Locklyoch, and James Hamilton, the 6th Duke of Hamilton.

Two of the stallions originally bred with Scottish mares belonged to these two gentlemen – a black stallion imported from England by Paterson and a dark down stallion owned by the Duke of Hamilton. These two stallions would be two of the main Clydesdale breeding stallions.

During the early breeding of Clydesdales, there was a coach horse stallion named Blaze. Blaze, who was 165cm in height, came to have several foals with kept written pedigrees to keep track of his lineage. Then, in 1806, a filly who would come to be known as “Lampits Mare” was born, whose line could be traced back to Blaze.

One of the Lampits Mare’s foals was Thompson’s Black Horse, also known as Glancer, who would significantly influence the breed of Clydesdale horses. “Why?” You may ask. Well, Glancer can be found in the ancestor of most Clydesdales today. He was described as having flowing, silken hair, thick legs, and clean, sharp bones.

What are Clydesdale Horses Used For? 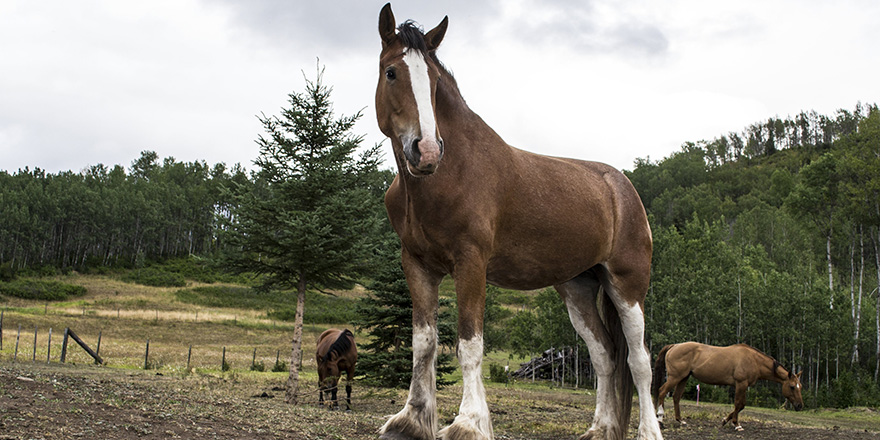 These horses are still used for farming and agriculture to plow fields, but they have many more responsibilities now.

With a saddle and the correct gear, a Clydesdale can be ridden by an experienced horserider. This opens up the duo to horse shows and competitions where a solid partnership is needed between humans and horses. Some breed owners decide to enter their Clydesdale purely in shows where they are judged on the appearance of the horse, while others partner with their horses further and enter other competitions.

A Clydesdale is a great choice for heavy hauling back on the farm. Even away from the farm, they are often used to pull carriages and wagons, and they make very eye-catching horses for tourists to be driven around.

Because many general public members don’t know much about horse breeds, the brown and white Budweiser horses are often just referred to as exactly that – Budweiser horses. However, Budweiser’s horses in their adverts and promotional material are commonly colored Clydesdales. Clydesdales are easy to identify thanks to their size and the long hair around the bottom of their legs.

The Budweiser Clydesdales are several teams of horses that travel around the world to promote the brewing company. Only eight horses are driven at any one time, but each team has ten horses if an alternative is needed.

They often appear as animal actors in Budweiser’s T.V. commercials, particularly for Super Bowl adverts. Interestingly enough, the first introduction of a Budweiser Clydesdale team was in April in 1933. The teams are housed in various stables near the company’s brewing facilities in St. Louis, Fort Collins, Colorado, and Merrimack.

Can You Ride a Clydesdale?

You can saddle and ride a Clydesdale, though they may not be the most suitable riding animals for beginners to try. Don’t let their cute white facial markings and gentle disposition fool you. These horses are absolutely huge, and it would be better for a more experienced rider to mount one.

There are, however, riding experiences in the U.S. and Great Britain that offer the chance to ride on the breed that originated in Scotland. These experience companies should be fully trained, but we certainly recommend checking their websites for more information if you go looking for one. 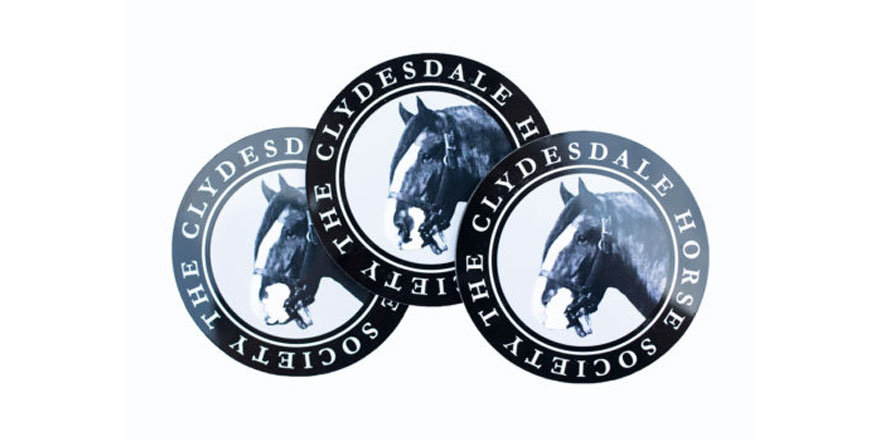 Referring to the first Clydesdale Horse Society, founded in Scotland, this organization has been around since February 1877. They exist to promote, preserve and do their utmost to keep the Clydesdale breed and knowledge of the breed alive.

The Clydesdale Horse Society is a not-for-profit Charity with their council and semi-regular meetings. Once they’ve paid their membership, members can have a say at these meetings and vote on any decisions to be made regarding the organization. The site also lists upcoming shows.

Clydesdale Breeders of the USA

The American Association for the Clydesdale horse breed, Clydesdale Breeders of the USA, has been around since 1879, so it’s just a couple of years younger than its Scottish counterpart. The website is much more user-friendly, and it’s easy to find what you’re looking for in terms of information.

This organization is open to all individuals interested in protecting the well-being of the Clydesdale breed. Their association aims to collect, revise, preserve, and publish the history and pedigrees of purebred Clydesdale horses. Furthermore, they sponsor national and regional horse shows, hold a national sale offering the largest selection of Clydesdale horses in North America every year, and much more.

The Rare Breeds Survival Trust is dedicated to reversing the decline in all livestock breeds on their watchlist, intending to have them stable by 2028.

It’s unfortunate, but Clydesdales are on the RBST equine watchlist under the list of “at-risk” horse breeds. The U.K. only has 14 native horses and pony breeds, with 12 considered rare. As with many other draught breeds, the numbers of this breed dwindled following the increased use of mechanical power. The more vehicles and machinery invented to take over, the less draught breed horses were needed for their strength.

Their size, for one. Clydesdales were originally bred from pairs that included a Flemish stallion and a Scottish mare before Shire horses were later added to the mix. They are large, majestic horses who have gained a fair bit of publicity thanks to their teams shown in Budweiser ads. They're also known for their giant feet, covered by long hair and as large as dinner plates.

Although the breed is primarily used on farms and to pull carriages and wagons, they are good riding horses. It's better to have some experience before you hike yourself up onto the back of a horse of this size, but a trained and registered riding instructor should be able to teach you what you need to know. Be aware that this breed isn't fast, so you aren't likely to speed away on them.

In the United States, the price of a Clydesdale horse starts at $1,000 and can go higher than $5,000. Certain things such as age, history, and pedigree will be factored into the price that a breeder or seller asks for. Foals are usually cheaper than full-grown adults of the breed because they won't be fully trained, and male adults typically cost a bit more than females.

Despite their size, Clydesdales do make great family horses! They aren't a common choice because they can be intimidating, but if you have a farm with a lot of space and need a good, strong working horse, this breed might be perfect for you and your family. You also won't need to worry about any special Clydesdale speed or anything like that - these horses are very lazy and like to eat a lot of food. They weren't bred to run; they were bred to pull heavy loads at a slow pace.

We wouldn't recommend choosing a huge and heavy horse like a Clydesdale for a beginner. They may be friendly, but horses have their minds and are very independent creatures. Also, a beginner isn't going to know how to control a horse of this size, so it's best to start with a more average-sized breed before getting into large horse breeds.

The top recorded speed of a Clydesdale is 20 miles per hour. As we've mentioned, they aren't a breed built for speed and aren't great with showjumping because they have extremely heavy joints and large feet. If you're looking at buying a fast or agile horse, this isn't the breed for you.

Because Clydesdales are larger horses, you need to look at their stall and how much land you have. Their stall needs to be at least 24 x 24 feet, and they will need a minimum of one acre of land, though something more towards two acres would be better. The more horses you have, the more land they will need.

Other animals
The Belgian Horse: Fun Facts and Breed Information
Horse Speed: Just How Fast Can a Horse Run?

Other animals
What Are The Best Types of Hay for Horses