By MyPetNeedsThat Staff
Last Updated January 28, 2022
Every product and service on My Pet Needs That is independently selected by our editors, contributors, and experts. If you purchase something through our links, we may earn a referral fee. Learn more

Grey cat breeds are often the most popular. Among cat lovers and fanciers, their silver and grey coats are often called blue. Some particular felines are known to gain the coat color when born regardless of what cat breed they are however other breeds are known to only have grey coats. Take a look at our list featuring various different types of grey cats. 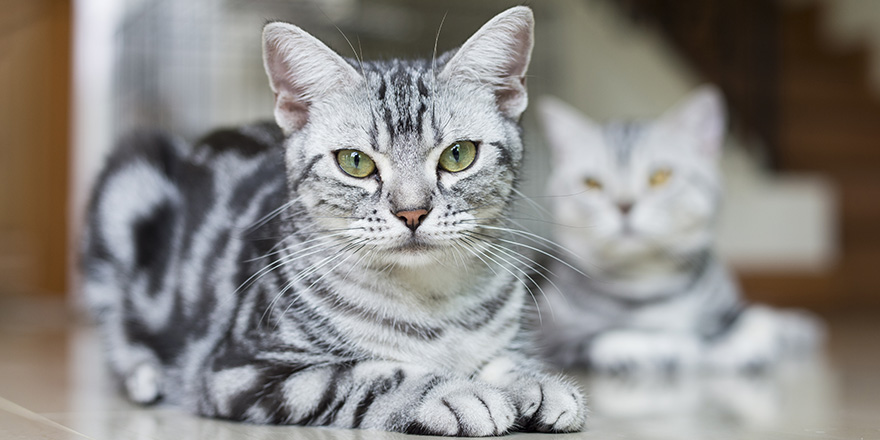 This short hair grey cat is known to come in a variety of coat colors and markings. Most notably they appear to have tabby, tortie, or calico patterns which can come in a number of colorings. The silver coat is perhaps one of the most captivating and cat owners all over adore this breed when the color is accompanied by a tabby marking as the assorted tones of silver and grey compliment each other well.

The American Shorthair is a fierce breed that will protect your home from vermin but will still love to accompany you as you settle down to an evening on the couch. Aside from their hunter heritage, these adaptable cats are known to be friendly, calm, and love to explore.

As the name suggests, this breed typically maintains a short coat and sheds little. The American Shorthair tends to take care of himself however a weekly brush will be beneficial to dislodge stubborn dead hair and to distribute natural oils throughout the fur. 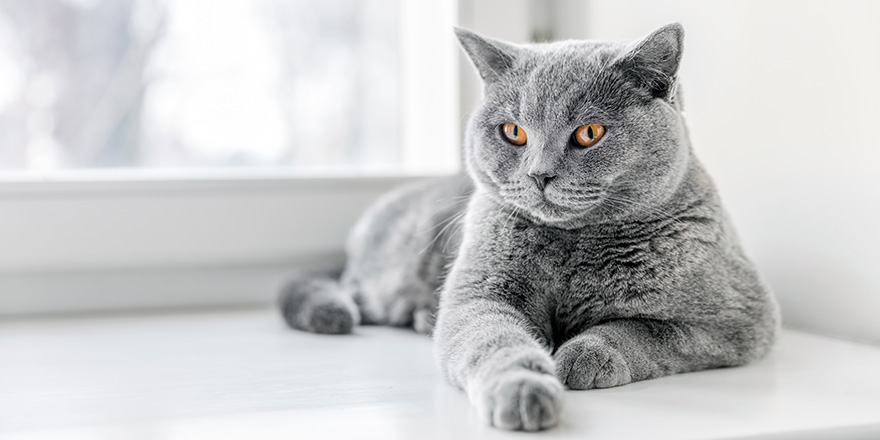 Due to their breeding heritage, the British Shorthair is believed to be closely related to the American Shorthair. This silver-coated feline is known to have powerful, muscular legs with rounded paws complete with yellow eyes. The British Shorthair cat can take on a variety of patterns and coat colors including one consistent shade all over. The most popular and familiar coat type is blue which is why the beautiful feline is featured within our list. 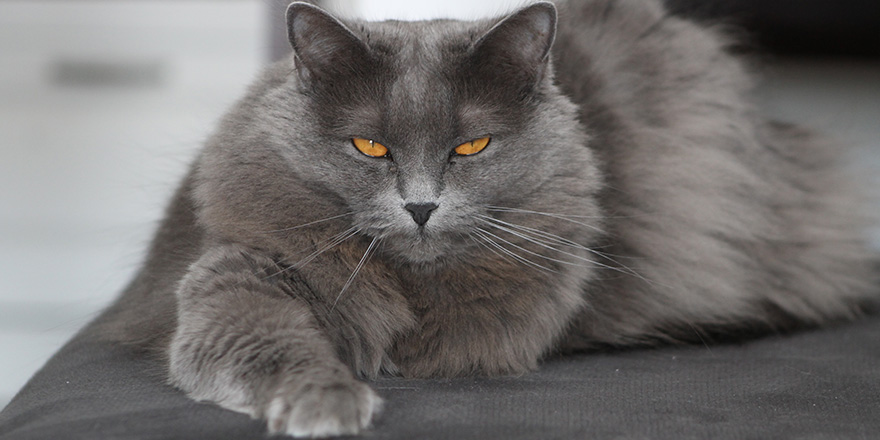 The Chartreux is another rare breed of grey cat which has only increased its popularity. Their coat is one complete color and is also water-resistant. Their well-loved grey coat is only this, as other colors and coat patterns are not known to appear in the Chartreux breed. These adorable felines tend to have deep amber/orange-colored eyes.

Interestingly, the Chartreux cat is nicknamed the ‘Smiley Chartreux’ as its facial structure has developed to make it look as if the cat is constantly smiling. It is also the national cat of France.

Like many other cat breeds, the Chartreux cat is quiet and amiable. They have been known to enjoy bonding with their humans as well as spending time in their presence. Having said that, these quiet cats do enjoy seeking out places to be by themselves and won’t be too comfortable in noisy or bustling households.

This cat has a unique and luxurious coat that requires brushing regularly. These cats are known to shed throughout the year so daily brushing may be necessary, especially during the warmer months. 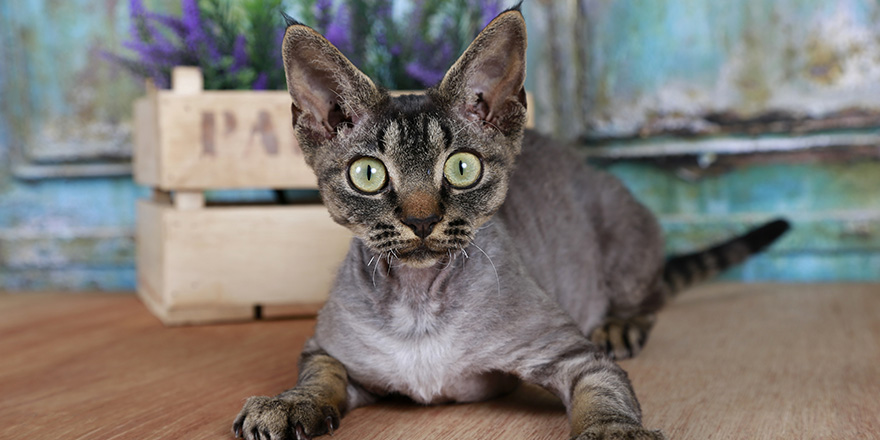 The Devon Rex is one of the most popular cat breeds due to its unusual appearance when compared to other cats. These felines are recognizable for having smaller faces with large ears and eyes. Not only this, but the Devon Rex also has high cheekbones, long slender legs, and a soft, wavy, short coat.

The Devon Rex is an intelligent, active, and playful breed that enjoys social interaction with its humans. Previous and current owners also claim that they can be trained to heel and walk on a leash.

Amongst its many other endearing traits, many pet lovers adore the Devon Rex due to its low shedding tendencies. The grooming needs of this cat differ due to the fragility of their fur. When they overgroom themselves, it can lead to bald spots and skin irritations so owners must be cautious when grooming this cat. If you want to know more about this cat breed, take a look at our guide to find out all you need to know. 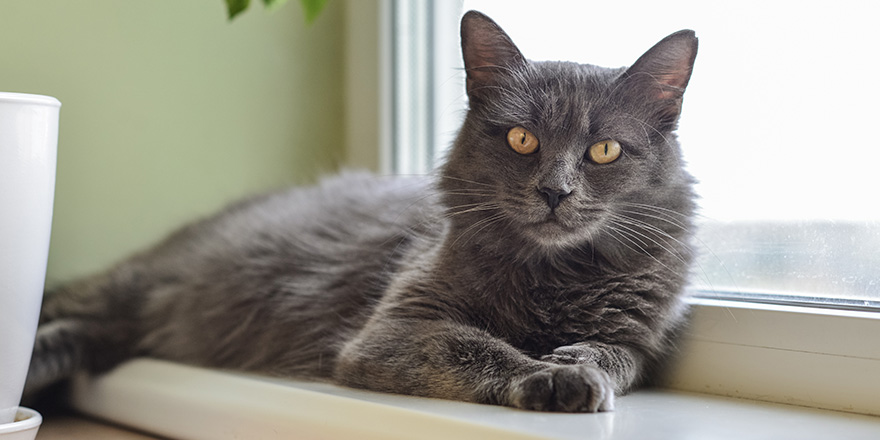 The Nebelung cat is often regarded as the long-haired version of the Russian Blue. This grey cat breed has a distinct coat complimented by striking green eyes with large, rounded ears and a graceful demeanor. The Nebelung generally has a silver-tipped coat that is soft to touch. Those looking for this particular feline may have to source from a breeder as they are considered a rare breed.

Fun Fact: In German, their name means ‘Creature of the mist’

The Nebelung is a charming and intelligent breed. They are devoted companions that often like to curl up on the laps of those they love. In addition, this grey fluffy cat will stay close to their family members by sometimes accompanying them from room to room.

The Nebelung cat has a double coat with medium-long hair so this will mean that they may require frequent grooming compared to other pets. By brushing your grey cat’s fur frequently you will reduce the amount of shedding and fur found around the house. This will also help to nourish the coat by dispensing the natural oils throughout the hair. 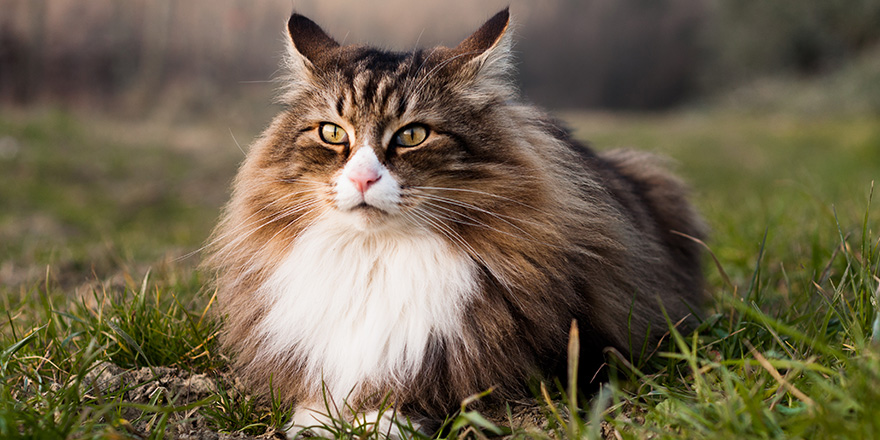 The Norwegian Forest cat is a big grey cat and one of the most famous grey cat breeds featured here. A lot of cat owners are attracted to the Norwegian Forest cat for its fluffy fur and larger size. It can take up to five years for this breed to reach its full size as they can grow to be 18 inches in height and weigh anywhere between 12-22 pounds in total. These beautiful cats don’t always come with a grey coat however as they are known to have different patterns and colorings.

Although shy around strangers, Norwegian Forests are affectionate and active cats. Pet owners often regard that a standard Norwegian Forest tends to be friendly and sweet but not typically a quiet lap cat like other cat breeds.

These grey cats will need regular brushing due to their long hair to prevent tangles and matting. As with other breeds, frequent brushing will help to dispense the natural oils keeping the skin and hair moisturized and nourished. Occasionally, you will need to bathe them if they get dirty to keep them in good condition. 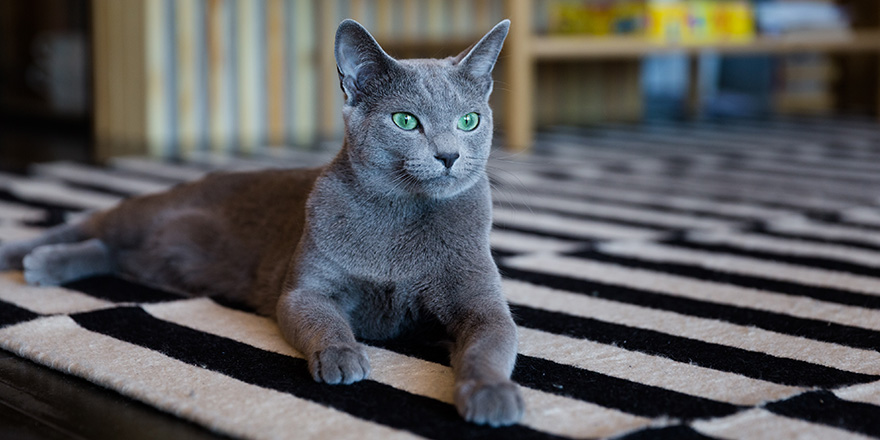 The Russian Blue cat is a strikingly beautiful breed and is the medium-haired version of the Nebelung cat breed. These cats have soft, plushy grey fur that stands on end due to its thickness instead of lying flat. Its silvery, plush coat is short-medium in length and remains a consistent hue all over. Complete with emerald green eyes, the Russian Blue is a muscular and athletic breed that loves to play and run.

As a stranger, the Russian Blue won’t come running to receive your love and affection. However, if you’ve raised one of these beautiful grey cats, or are lucky enough to get to know one closely at all, they can be playful and adoring.

This grey cat isn’t known to shed massively due to the denseness of its coat however it may require grooming frequently to keep it in good condition. It is recommended that their fur is brushed at least once a week

If you’re on the hunt for a new furry friend and want to know more about Russian Blues, take a look at our in-depth article available here, to find out everything you need to know. 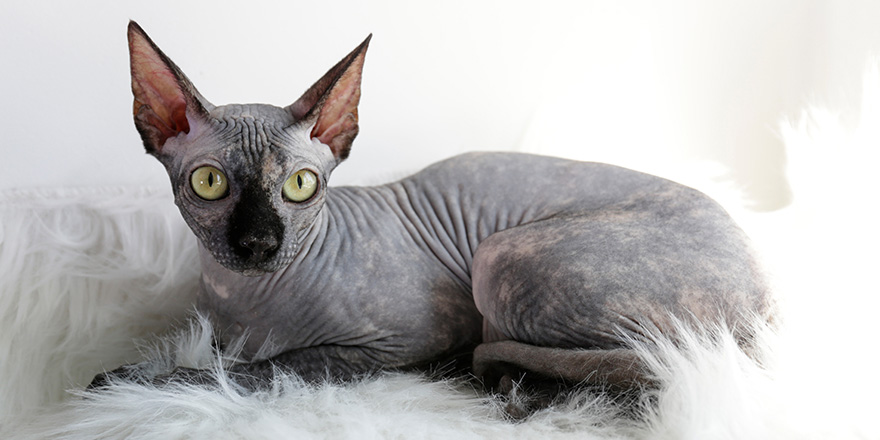 Sphynx felines are a popular yet unusual domestic cat breed due to their distinct appearance. These cats look to be totally hairless however they tend to be covered in a light peach fuzz. They are also known to have affectionate, intelligent, and playful personalities.

Believe it or not, these hairless cats can have a dog-like personality as they are an energetic breed that loves to play games such as fetch. Another dog-like feature is that they are people-orientated cats that will often dislike being on their own.

Although these kitties are not considered pure silver cat breeds, it’s not uncommon to see them born with silver/grey/blue color coats. Many breeds of different colors and patterns will often have litters containing an adorable grey fluffy kitten. Some of these cat breeds are listed below: