By MyPetNeedsThat Staff
Last Updated January 21, 2022
Every product and service on My Pet Needs That is independently selected by our editors, contributors, and experts. If you purchase something through our links, we may earn a referral fee. Learn more

Long-haired cats are well known for having a beautiful, silky coat that’s irresistible to touch. However, there is more to them than meets the eye. These long-haired varieties all have some interesting features that are worth a read if you’re considering owning one in the future. If you’ve been on the prowl for the perfect long-haired kitty then take a look at our list of the 11 most popular long-haired cat breeds. 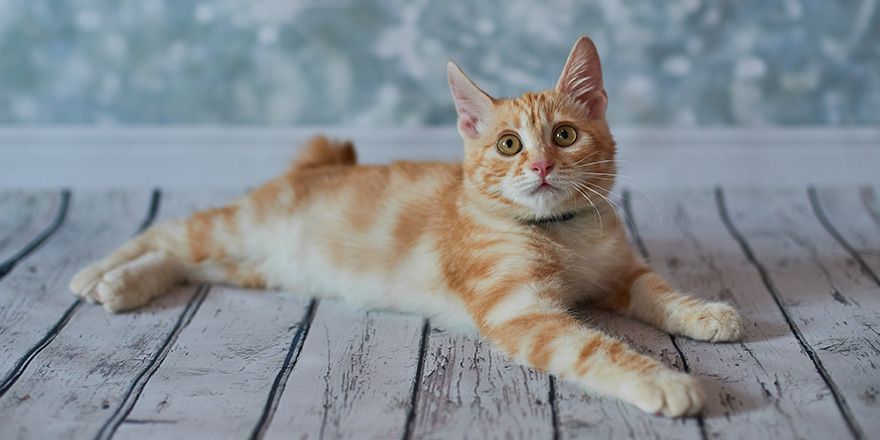 American Bobtails are known to be docile, social, and affectionate cats and are also easily recognized for their naturally occurring bobbed tails. Notably, these cats are also popular for their playful personalities as they love to bat around toys and frolic with their humans even engaging in play with other pets.

Appearance: Apart from their long coats and short bobbed tail, the pattern of an American Bobtail can range. This cat breed is known to come in many different colors from cream, lilac, fawn, and chocolate.

Health: These long-haired cats are generally a strong and healthy breed with no known genetic healthcare issues. However, like many other cats, they are likely to develop conditions if not properly looked after. 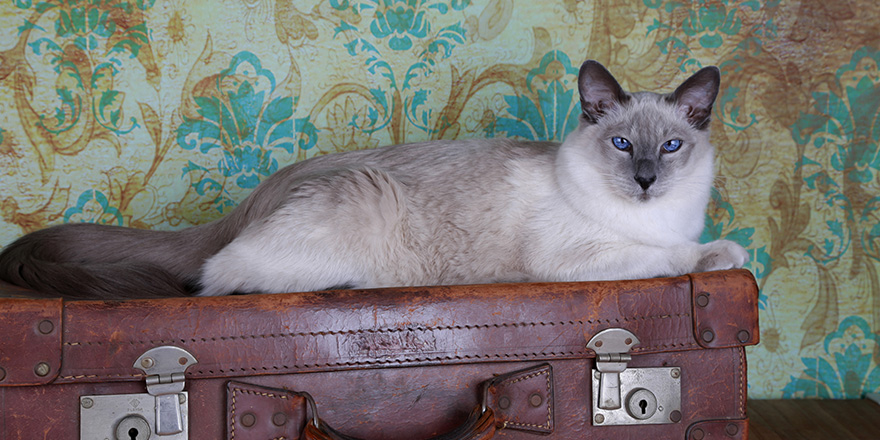 The Balinese is a long-haired version of the popular and well-known Siamese breed of cat. These cats are said to be intelligent felines that thrive on mental stimulation and lots of playtime.

Appearance: These elegant-appearing cats tend to have striking blue eyes with long, silky coats with colors similar to the Siamese cat. Although they may look delicate, they have powerful hind legs with neat, oval-shaped feet and are overall athletically built.

Health: Sadly, many Balinese cats can develop conditions such as asthma as well as progressive retinal atrophy. In addition to this, they can also suffer from amyloidosis, a disease in which protein is deposited abnormally in various organs. 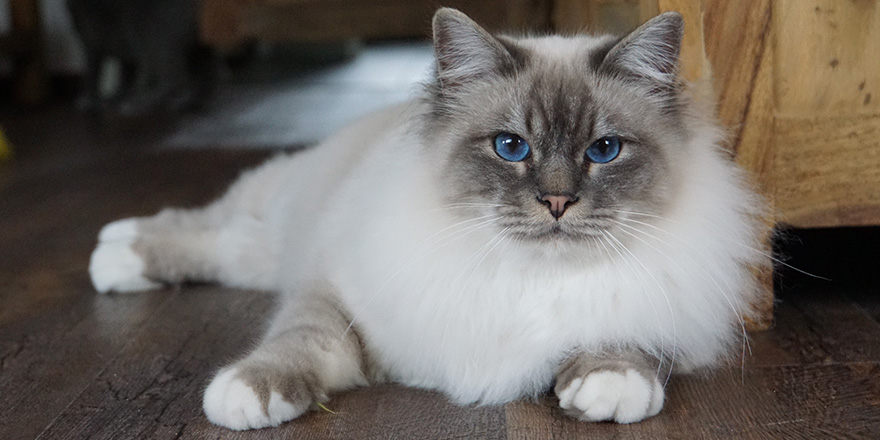 The Birman cat is known as the sacred cat of Burma and is a gentle and intelligent feline much like the Balinese. A lot of pet owners say that this is one of the most rewarding cat breeds and is well suited to family life.

Appearance: The Birman is another cat breed that somewhat resembles the Siamese. This fluffy cat has long silky hair with a single coat overall that almost avoids matting altogether. Birman cats also have beautiful blue eyes and often sport the pure white or cream coat. These cats also can come in other shades such as seal point, tortie point, lilac point, or blue point.

Health: Birman cats tend to be a healthy breed overall although, on occasion, some have been known to develop heart disease later in life. 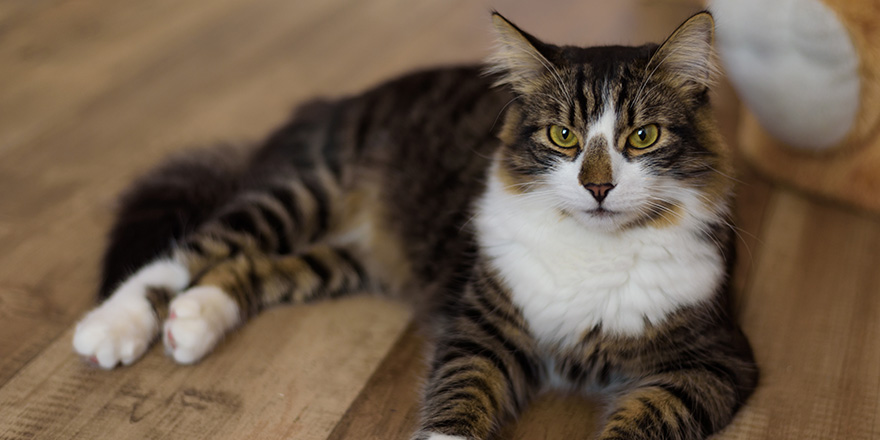 Believe it or not, domestic longhair cats are one of the most genetically-diverse cats and are commonly mixed up with pedigreed American Long-Haired cats. This fluffy and popular cat type isn’t one particular breed on its own, but the product of mixed breeding over the years. Cat breed associations, such as the Cat Fanciers Association, do not recognize the Domestic Long-Haired Cat as an official breed due to its genetic background but cat lovers all over accept its genetic makeup as an individual.

Appearance: The coat color and eye color of this cat can vary due to its diverse background and heritage. However, its long silky hair will always be the number one defining feature of the kitty.

Although their coats range in pattern and color, the most common coat types of this cat breed tend to be tabby, smoke, or tortie with their color varying also. The average weight of a domestic long-haired cat is around 15 pounds but can generally weigh between 11-22 pounds depending on their diet and energy levels.

Healthcare: Due to its genetic mix-up, there are no particular health conditions that are directly linked to the Domestic Long Hair feline. However, there are still common diseases that can affect them depending on their quality of life such as kidney disease, hypothyroidism, and general stomach problems. 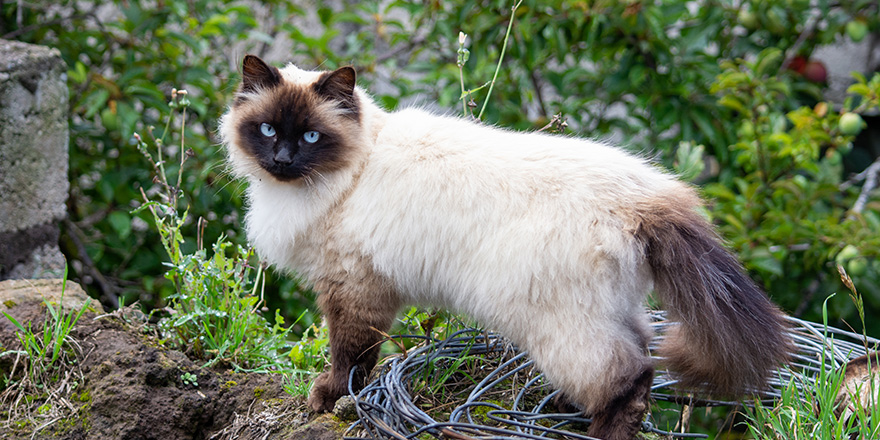 Like the Persian cat, Himalayan cats have a much more calm demeanor and personality compared to other cat breeds. These long-haired cats tend to prefer a quiet environment though that doesn’t mean they don’t appreciate time with their humans cuddling or playing.

Appearance: This cat breed has a similar face structure as Persian cats. They will have a flat face with a round head complete with a sturdy build. Their coats can come in cream, grey, red, and chocolate point colors.

Health: Himalayan cats, unfortunately, have some health concerns that may or may not be due to their genetic heritage. For example, they are known to develop breathing difficulties and heat sensitivities as well as PRA. 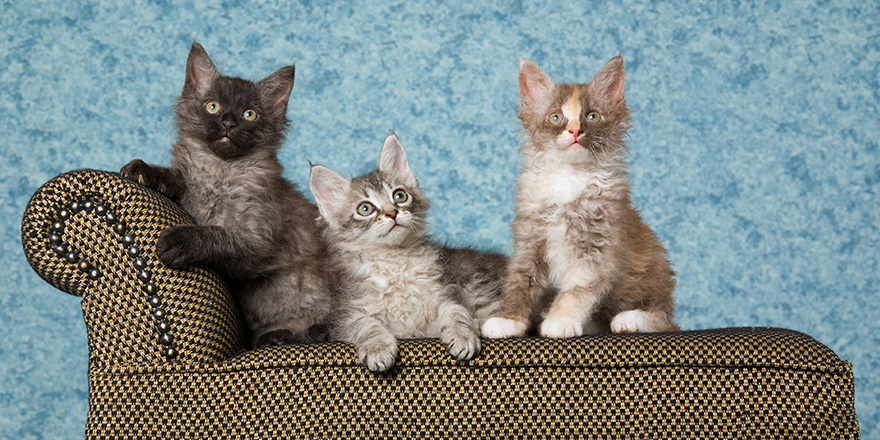 Like other long-haired breeds noted previously, the LaPerm is an intelligent cat although they are known for being somewhat mischievous. In a loving home, they are friendly, curious, and entertaining cats with a lively nature that are also likely to form strong bonds with their humans.

Appearance: The aptly named LaPerm cat is well known for having adorable curly coats. Some of these coats appear to be of the short hair variety but that’s only because the curls are tightly wound whereas others can be loose ringlets or even wavy. These long-haired cats will also have a curly or wavy plumed tail and their overall coat will come in a variety of colors and patterns.

Health: As of yet, it is unknown if these cats are likely to form genetic diseases however if you’re buying from a breeder it’s important that the kittens are screened regardless. 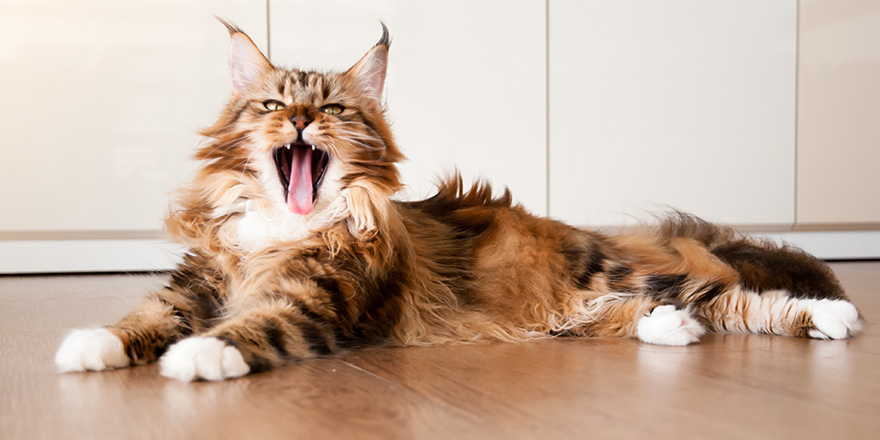 The Maine Coon breed is one of the most well-known long-haired cats to exist and is mostly known for its large size and bushy tail. Although they are not described as needy the Maine Coon are gentle giants that appreciate the time spent with their owners. Some can often be aloof however they will still value time spent in their humans’ presence.

Appearance: Maine Coons are large cats with strong builds with an average weight of between 12-15 pounds. They often have pointed ears and tufted paws with a shaggy, thick coat. These cats commonly have a tabby patterned coat although other variations are possible. More often, Maine Coons have a brown and black coloring, as if they were a long-haired tabby cat, however, they have been known to have a wide span of other shades and tones. Their heavy coat is also said to be water-resistant and easy to maintain. Their eye color can also vary from amber, blue, brown, and green eyes.

Health: Due to their size and weight these felines are likely to develop hip dysplasia and spinal muscular atrophy. Heart disease can also occur in Maine Coons as well as kidney disease.

If the Maine Coon breed has taken your fancy, take a look at our article detailing everything to know about this feline. 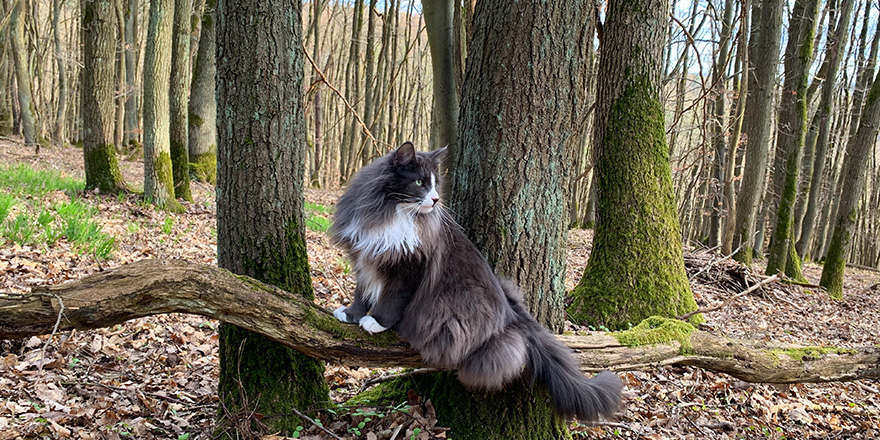 Norwegian Forest Cats are also among one of the most popular long-haired cat breeds due to their luscious locks and friendly nature. The interesting thing about this natural breed is their affiliation with Norse mythology as they are said to have been admired by the God of Love, Fertility, and War, Freya. Although they may not be as affectionate as most cats featured on our list, as they are very cautious of strangers, they will be friendly and gentle toward their owners.

Appearance: Norwegian Forest Cats have a water-resistant, double coat. These fluffy cats will also have long, bushy tails and tufted ears similar to the Maine Coon although this breed tends to be a little smaller in size. The average weight of an NFC is around 14 pounds. The Norwegian Forest Cat can come in a number of colors but are rarely found in color point. Their eyes come in any color from green, blue, amber, or even a mix (Heterochromia).

If you want to know more about this popular feline breed, take a look at our article found here. 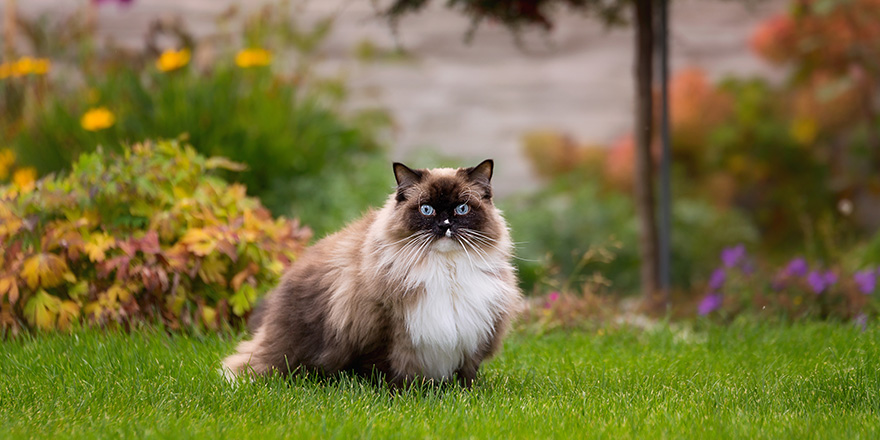 Ragdoll cats are a relatively new breed first introduced in the 1960s in California and was eventually recognized as an official breed in 2000. These long-haired cats are friendly and adoring kitties that love to take a seat on their human’s lap and receive a head scratch. They are also clever and playful in nature and have been known to pick up tricks.

Appearance:  Ragdolls are one of the largest cat breeds as they can grow to be around 20 pounds in adulthood. They have a shiny, single coat that can come in a number of colors and patterns. Similar to Himalayan and Siamese cats, they usually have a lighter body with dark tones and colors situated in other places. These cats’ markings and colors can range across the pallet with alternating combinations but they will almost always have piercing blue eyes.

Health: Ragdolls can be affected by bladder stones and heart disease. They are also known to have a predisposition for feline infectious peritonitis. 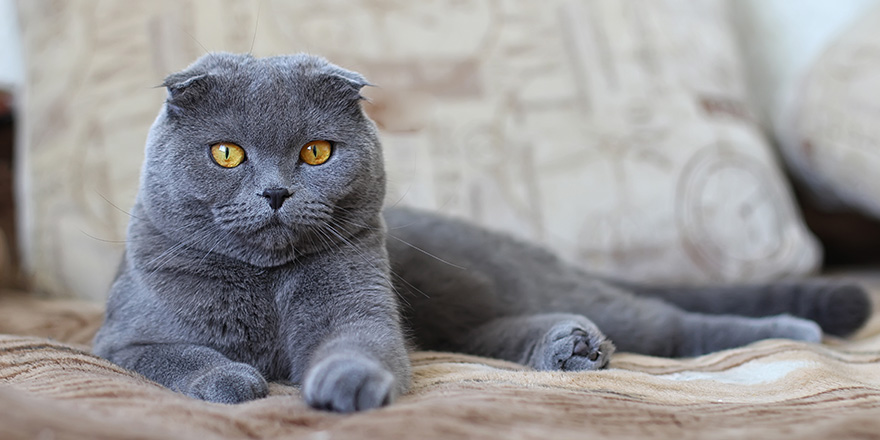 These longhaired cats have been loved for a long time due to their unusual features and intelligent nature. Scottish Folds are particularly outgoing cats that love human interaction however they are extremely vulnerable to degenerative joint disease.

Appearance: The Scottish Fold’s most notable feature is their folded/curled ears. They can also come in a wide range of colors and markings including solid shades, tabby, and tortie.

Health: As mentioned previously the Scottish Fold is prone to health problems involving the joints due to the flexible cartridge in their bodies. Their ears can also develop infections if not maintained well. 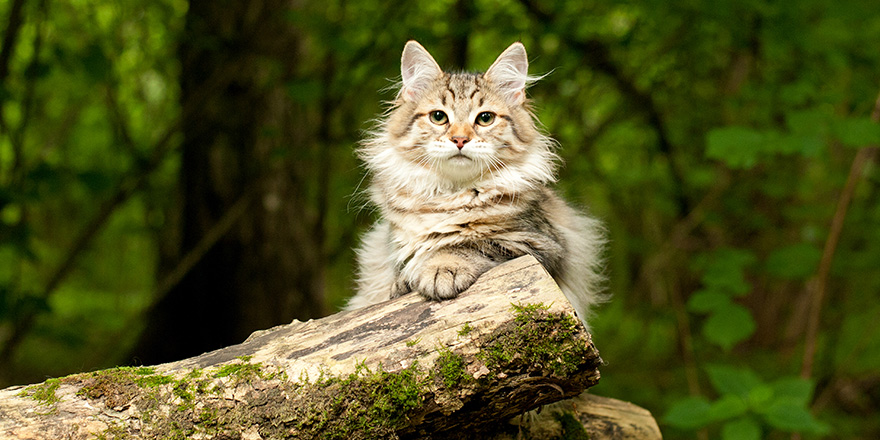 Siberians are an ancient breed, known to be cordial and active. These felines are people orientated and will warm quickly to strangers and even quicker to their families. The Siberian cat loves affection and loves playtime more so owners are encouraged to spend a lot of time with this fur baby.

Appearance: Siberians usually have a strong muscular body, fluffy paws, and a triple coat. Their coat is made up of a longer outer coat, medium middle, and dense undercoat. These felines can come in a variety of colors, including eye color, and patterns although white Siberian felines will typically have blue-sapphire eyes.

Health: Generally, Siberians are a healthy breed although they can be at risk of Hypertrophic cardiomyopathy.

Although felines have a considerably longer lifespan than a lot of dog breeds, looking after your long-haired kittens will ensure that they are happy and healthy for longer. Some breeds mentioned here have a shorter life span than others, however, given the correct care and diet, there is the possibility that they could surpass these expectations.

Cats with long hair will undoubtedly need to be groomed to keep their coat healthy and looking great as opposed to short-haired cats. However, daily grooming or weekly bathing may not be necessary for all of the breeds featured here.

The grooming frequency will depend on how often the long-haired cats shed. For example, those with a triple or double coat may need assistance removing tangles and preventing matting. These cats will need brushing once or twice a week to keep their coats untangled and free of debris and loose or dead hair. However, some types of long hair cats don’t often get tangled or matted fur at all.

Although these breeds grow long hair it is unnecessary to cut their coats however if they experience severe and troublesome matting cutting the fur may be the only solution. Whereas owners can do this themselves, it is possible to hire a professional groomer to complete the work for them.