Everything You Need To Know About Tabby Cats

By MyPetNeedsThat Staff
Last Updated November 15, 2021
Every product and service on My Pet Needs That is independently selected by our editors, contributors, and experts. If you purchase something through our links, we may earn a referral fee. Learn more

You may see a cat with stripes or spots and presume it’s respectively a tabby cat but did you know that tabbies aren’t a specific breed? Have you also noticed that most of these cats have an ‘M’ on their forehead? Did you know that all cats carry the tabby gene? Tabby cats are a common household companion, but there are facts about these kitties that may surprise you. Throughout this article is everything you need to know about tabbies including coat markings, color variations, genetics, and some additional information about orange tabby cats and why they exist.

What is a Tabby Cat?

‘Tabby’ actually refers to a cat’s coat pattern and is not considered an individual breed. Tabby patterns can come in various colors including, orange, brown, silver, blue-grey, and many more, and are a common pattern in most domesticated cat breeds.

The word ‘Tabby’ comes from the Arabic word ‘Attabi’ or ‘Attabiyah’. Attabiyah, a neighborhood in Baghdad, was known for the making of a particular kind of silk that had a resemblance to the coat of a tabby cat. The word ‘tabby’, however, wasn’t formed or associated with the coat pattern until much later.

What’s so Special About a Tabby?

We’re glad you asked! Besides having loveable, affectionate, and playful personalities, tabbies have an array of different coat patterns. These tabby markings differ from swirls, stripes, or spots and some even have a distinct ‘M’ in the lines on their foreheads. On occasion, a collaboration of different markings can be seen on a tabby’s coat. 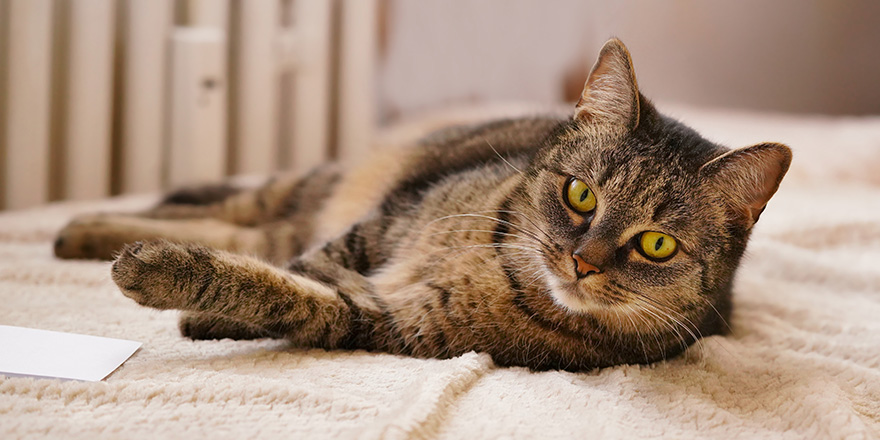 Where do Tabby Cats Come from?

The tabby pattern is said to originate from the domestic cat’s direct ancestor as it is a genetic trait that exists within their DNA. These ancestors include such felines as the African Wildcat, which is closely linked to the mackerel tabby cat for their classic tabby pattern. Other types include the European wildcat and the Asiatic wildcat.

The tabby pattern comes from a dominant gene passed down by a cat’s ancestors called the agouti gene giving tabbies what is known as ‘agouti hairs’. On close inspection, the individual agouti hairs appear to include light and dark bands made up of several shades. The darker color is usually the base of the hair which then blends into several lighter tones.

A tabby cat’s markings will be made up of the darker, solid, base hairs, whereas the rest of the fur in between is comprised of the agouti hairs. Some cats that primarily have agouti coats will have a salt and pepper texture due to the alternating different shades in each individual hair.

All cats carry the gene although some tabby coat patterns may be more prominent than others. Even black cats can show some form of the tabby pattern when in direct sunlight, showing very dark brown stripes or even spots. However, if your cat doesn’t appear to have the markings they can still carry the gene and pass it down to their litters.

Stripes are the most common tabby pattern however, as mentioned above, there are other distinct and unique markings such as spots and swirls. Below we have listed each tabby type with its description to help you differentiate between them.

The Classic tabby is often known as a blotched tabby in some regions due to their thick, swirl-like patterns on their coats. American Shorthair breeds often have the same markings as classic tabbies.

A ticked, or even, ‘Agouti’ tabby will deceive you initially. These cats have the usual tabby markings on their face and agouti hairs over the rest of their body which gives them a salt-and-pepper-like appearance. Although, it is common for ticked tabbies to have very faint markings that can be easily missed unless you get up close and personal. The usual tabby stripes can also form on their legs and tails.

Mackerel tabbies are the most well-known of the tabby type for their bands of solid or broken stripes all over their bodies. Usually, a mackerel tabby will have a stripe that runs along its spine, that the other stripes seem to branch from, giving its coat a fish skeleton pattern which is likely where the name originated from.

These tabby stripes also often resemble the stripes of tigers as they are made up of thick and thin, dark colors that run down the sides of their bellies and shape into points.

Instead of having long stripes or swirling patterns, spotted tabbies will have spots of varying sizes that can even be oval-shaped. It is currently unknown if these tabbies have a separate gene that causes the spots or if they are a variation of the mackerel tabby coat as some of the spots can look like shorter, thicker stripes.

Domestic cats such as the American Bobtail and the Ocicat often have the spotted tabby pattern but that doesn’t mean that another breed of cat can’t inherit it.

Patched tabbies aren’t often listed as a specific coat pattern however it is worth understanding that the different markings of a tabby can be combined resulting in a patched appearance. These markings are generally found in calico or tortoiseshell cats which have brown, black, and white colorings, or even orange spots and patches.

The markings on a patched tabby can be a mixture of any of the four patterns listed above. Although sometimes, their coats can favor a particular pattern over others. Many orange tabbies that carry the gene are also known to have several markings in their coat.

Tabbies may also have thin, narrow stripes or lines on their face and may even have prominent bands that wrap around their legs and tails. In addition to this, some tabbies are known to have a dark eye-liner around their eyes and have pigmented lips and paws.

In some cases, tabby cats can get patches of fur on their chests and bellies that are pale compared to the rest of their coat. This patch of fur can be a lighter tone of their primary color or even just pure white hair.

In ancient Egypt, felines were favored by pharaohs, so some believe that the ‘M’ on a tabby cat’s forehead means Mau, which is the Egyptian word for cat. Although, in the past, others have speculated that it stands for Muhammad who loved tabbies as he cherished and owned an Abyssian cat named Muezza. However, others believe the M is a blessing from the Virgin Mary as a tabby cat was said to have kept the baby Jesus warm in the manger.

Cat Breeds More Likely To Have The Dominant Tabby Gene

All cats carry the tabby gene however some breeds are more likely to form the patterns than others. These include any of the felines listed below:

How Big do Tabby Cats Get?

The Maine Coon is a popular pedigreed tabby cat and one of the largest cat breeds, so you may wonder if the tabby gene directly affects a cat’s size. The size of a tabby completely depends on the breed itself and isn’t directly affected by the gene so if you’re not a fan of large cats you won’t have to worry about your tabby growing past the size of a standard dog. 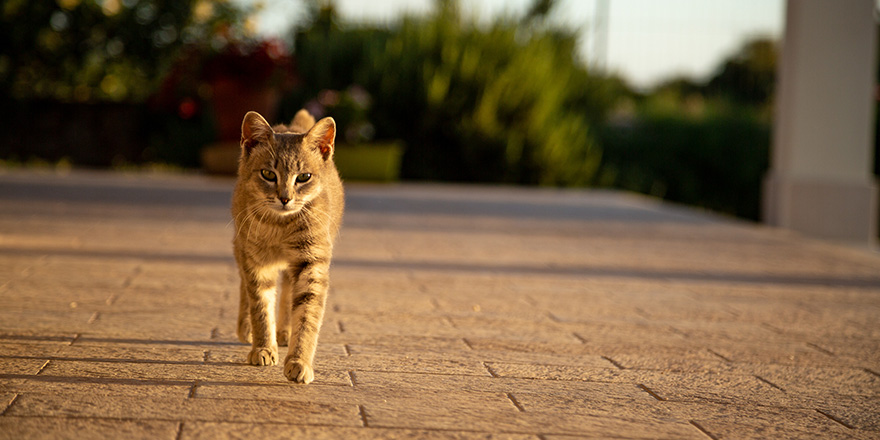 Orange tabbies are common and well-loved companions that have some interesting features. These facts have granted them their very own section in this article.

Orange cats always have tabby patterns and will never have a solid orange color to their coats. These ginger felines can develop any of the markings listed above and their orange coloring can vary in shade. In addition to this, much like a brown tabby or blonde tabby cat, they simply carry the gene and are not a distinct breed.

The pigment-producing cells create something called Pheomelanin which is responsible for the orange color of a cat. This is the same pigment that causes red hair in humans.

The Tabby Gene Vs The Orange Color Gene

The dominant agouti gene will reveal the tabby pattern in a cat’s coat although there can be a recessive allele that will prevent the markings altogether if paired with another recessive allele. However, the individual orange gene is dominant and can conceal the two alleles, altering brown and black colors to a shade of orange. So there is no possibility of a cat with a solid orange color.

If you’ve found yourself with a beautiful tabby kitten and want to understand what kind of temperament they will grow into it will be useful to read the below information to better understand your tabby cat.

If you’re specifically wondering about the mackerel tabby cat personality or even that of a patched, spotted, classic or ticked tabby it’s important to understand that the tabby genes don’t have any input into your cat’s charm or personality. In fact, their personalities will depend on their particular breed. The friendliness of tabby cats can also vary depending on what breed they are.

As mentioned previously, the tabby gene will not directly affect their personalities and the same can be said about their lifespan. The average, healthy cat can live anywhere between 10-20 years although indoor cats can live a lot longer as they are not faced with outdoor dangers and diseases.

However, according to Spruce Pets, specific cat breeds do have an average lifespan so if you have tabby kittens, it’s worth knowing what particular breed they are to be able to gather an idea of how long they will live. So, for example, if you’re specifically looking for the blue-grey tabby cat lifespan, you will need to know what specific breed of cat it is.

Where Can I Get a Tabby Cat?

If you’re looking for a new best friend the first place to look would be in a shelter. Tabbies are quite common so you’re likely to find one waiting for their forever home in your local rescue center.

You can also try contacting breeders for kittens with tabby patterns, although this may be expensive depending on the breed. Purebred tabby cats can be priced anywhere between $700 and $1500 whereas designer cats, such as the Bengal or Scottish fold, can be sold for around £2000. In addition to this, some may charge an exceptional amount for a female orange tabby cat as they are uncommon in litters. 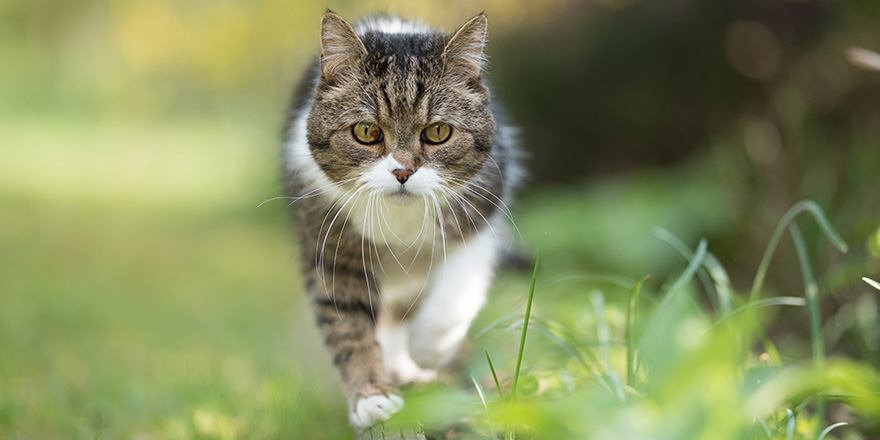 So if you weren’t sold on tabby cats hopefully this article has changed your mind. Tabbies are everywhere and are an extremely popular type of cat to own. Besides black cats, tabby cats are a popular choice for films and literature although they aren’t all as lazy and gluttonous as Garfield or as mischievous as the Cheshire Cat. Depending on the breed these cats come from they will love you unconditionally, play with you, and generally enjoy being in your company.