By Eloise Hands
Last Updated April 7, 2022
Every product and service on My Pet Needs That is independently selected by our editors, contributors, and experts. If you purchase something through our links, we may earn a referral fee. Learn more

Knuckling in dogs, particularly large dogs, is a little-known problem that can be easily rectified if it’s spotted early enough and treated quickly. If left untreated it can lead to skeletal deformities and permanent damage that will affect your dog’s mobility. So if you see your dog knuckling, be sure to get them to the vet as quickly as you can to work out the best course of action. Here we explain the signs and symptoms of knuckling in dogs, as well as the ways in which you can help your canine companion deal with it and recover from it. 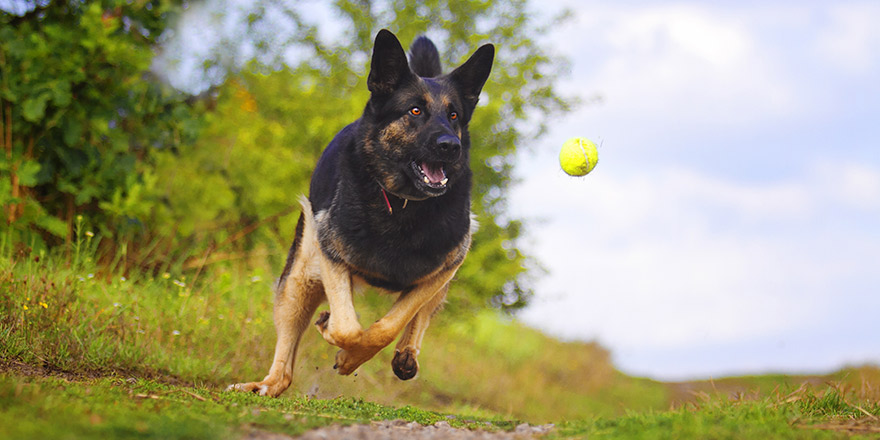 Otherwise known as carpal flexural deformity, knuckling under, or knuckling over, the term dog knuckling refers to when a dog begins to walk on the top of its feet as opposed to the pads. Knuckling happens as a result of the loss of conscious proprioception, which is to say the body’s awareness of how the paws should be carried.

Paw knuckling can affect both the front limbs and hind limbs of a dog. This can be caused by several chronic conditions, acute injury, or can even have dietary causes.

A good way to describe it would be when the foot is curled under, causing the dog to use its knuckles to walk instead. Much like how a gorilla walks on its knuckles as opposed to the flat of its hands.

In less severe cases they may simply appear to be walking on their tip-toes with their wrists (or carpus) pushed forwards. This can be more difficult to notice, particularly in puppies who are going through the rapid growth phase, as many owners tend to assume it is simply part of the process without giving it much thought. However, at this stage, it can be easier to treat the knuckling before it gets too far.

The Symptoms of Dog Paw Knuckling

We have described above how paw knuckling looks from the outside. Now let’s take a look at the symptoms and effects of knuckling when carpal flexural deformity occurs. If you notice any of the symptoms listed below, you should take your dog to the vet immediately to be checked over in order for your vet to plan treatment for the problem:

It is more than likely that dogs knuckling will experience more than one symptom at the same time. Therefore you should watch for multiple symptoms and make note of them when you take your canine companion to the vet. 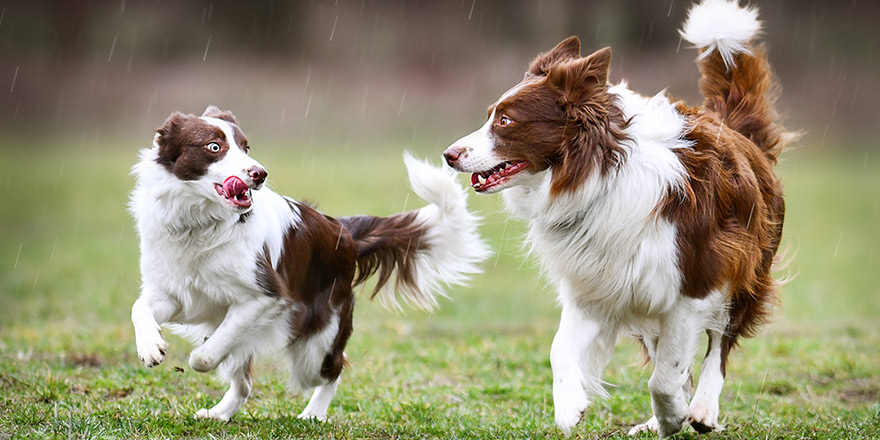 With most dogs, knuckling is the unfortunate side-effect of a variety of health conditions ranging from degenerative disease to dietary malnourishment. Dogs’ paws can be affected to varying degrees depending on the severity of the condition, with some being treatable, or even curable.

Not all dogs are guaranteed to be returned to normal once treatment is finished, however, they can be greatly improved.

This is also known by several other names such as a bulging disk, slipped disk, ruptured disk, or herniated disk. It can affect a variety of dog breeds ranging in age. This particular problem is age-related and can affect a young dog as much as an older dog, though it is more often seen in seniors.

A change in gait (sometimes resulting in knuckling) is often seen in dogs suffering from a ruptured disk, as they are attempting to make themselves more comfortable. Much like humans hunching when their back is in pain.

There are several non-surgical options for treating intervertebral disc disease including:

For more severe situations, it may be that your dog requires surgery to overcome their problem, in which case the diseased intervertebral disk material is removed in order to relieve the worst of the pressure on the spinal cord. Once the pressure is relieved, the bloody flow can start to return to normal. This can also prevent disk issues from arising in the future. There are also several other surgical options, including:

Degenerative myelopathy, also known as chronic degenerative radiculomyelopathy (CDRM), affects the spinal cord via the degeneration of the spinal cord’s white matter. The exact cause of unknown, but it is often seen as a secondary condition in German Shepherds that also struggle with hip dysplasia.

Sadly there’s no steadfast solution to degenerative myelopathy as it is progressive and currently incurable. However, though there’s no known effective treatment, it has been found that certain treatments for concurrent problems such as hip dysplasia and arthritis can help to provide some relief from the discomfort caused. These treatments include:

Fibrocartilaginous embolism is thought to be caused mainly by acute trauma to the spine. This could be as a result of jumping to catch a frisbee, playing too roughly, jumping from furniture, or something more serious.

This is an injury that can often heal of its own accord within a couple of weeks. Following an MRI to check the degree of damage, there are non-surgical ways to treat the condition should you want your dog to have a complete recovery:

Also known as wobbler’s syndrome, CSM is the result of compression in the spine around the neck area. This compression leads to a swaying or “wobbly” style of walking with the hind legs, whilst also taking “floating” short steps with the forelegs.

Wobbler’s syndrome is often secondary to another condition that has caused the spine to become compressed in the first place. Dogs with this syndrome often start to show signs from a young age (from as young as a few months) with those symptoms becoming more severe with time.

On a slightly more upbeat note, it is possible that the knuckling is being caused by something with a relatively simple fix. The more easily cured health conditions that can cause knuckling include:

This is simply a case of a dog changing the way it works to compensate for a different injury. For example, should a dog step on a piece of glass and have it caught on its paw, they may choose to use the top of the foot instead to avoid putting pressure on the injury site. Sprains are also a common reason for dogs to start carrying their paws in a different way.

With something like an injured paw, it’s simply a case of waiting for the injury to heal before your dog’s walking returns to normal. If your dog knuckling doesn’t show signs of improvement after a few days, you may way to seek professional advice from your veterinarian about seeking treatment for the injury.

Of course, for any obvious injuries such as severe cuts or damage to the paw, you should have your dog treated immediately. It may be that they require a splint to walk more easily whilst they heal.

Malnutrition as the cause of knuckling most often tends to affect large or giant breed puppies, as their bodies have much higher nutritional demands in order to keep up with their rapid growth. Malnutrition causes the muscles, tendons, or ligaments to be incapable of supporting the dog’s weight.

Puppy knuckling is surprisingly common in young large breed puppies, but can often go overlooked until the severity of the condition is obvious. That is why it is important to watch for the less severe symptoms such as clumsiness, an unusual gait, or yelping whilst playing.

Malnutrition is exactly what it sounds like, a lack of proper nutrients needed to support healthy growth. If your dog is not receiving the right nutrients due to a poor diet it can cause skeletal deformities as well as multiple other bodily dysfunctions.

The way to treat this would be to invest in food more specifically designed for your dog. It’s especially worth noting there is food for large breed puppies specifically formulated to support their rapid growth phase.

Many inexperienced raw-feed owners can make the mistake of not providing a balanced enough diet for their puppy, which can result in knuckling. For those owners, it may be worth seeking the advice of a dietitian. You may not that your dog corrects its own problem with time once its new diet starts to take effect. 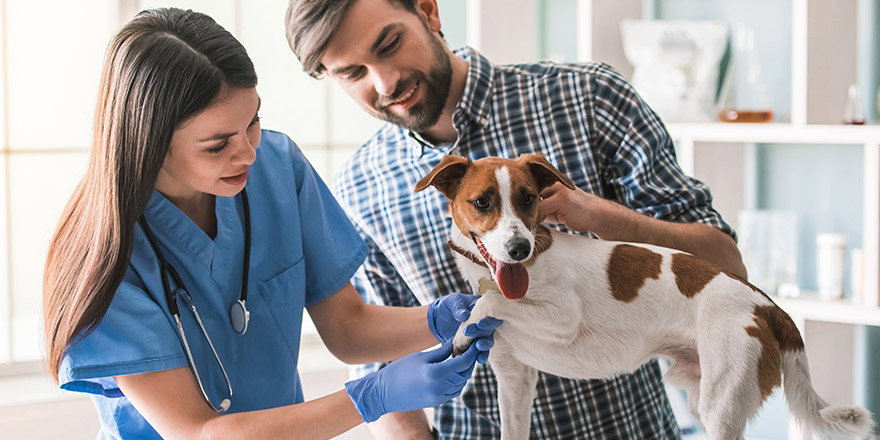 Ordinarily, you will find that the knuckling can be explained by one of the above diseases, or conditions. depending on the condition your dog is experiencing, the treatment will be chosen accordingly. Though for the knuckling specifically there is usually separate treatment to help your dog recover its mobility more easily, including:

For paw knuckling, treatment is relatively simple. So long as the underlying cause is being addressed, it’s then a case of sorting out physical rehabilitation to allow your pup to be able to move around freely once again. Dogs vary wildly in their ability to heal depending on age and overall health. Young puppies in particular tend to recover from dog knuckling more easily than older dogs with some puppies not requiring any rehabilitation at all.

Dog Breeds Most Likely to Be Affected

Though this list does contain some of the more commonly-seen knuckling breeds, we must stress that it can happen to any dog. Therefore, even if your dog is not on the list, it doesn’t mean they are exempt from developing the condition themselves.

The contents of the www.mypetneedsthat.com website, such as text, graphics, images, and other material contained on this site (“Content”) are for informational purposes only.
The Content is not intended to be a substitute for professional veterinarian advice, diagnosis, or treatment.
Always seek the advice of your veterinarian with any questions you may have regarding the medical condition of your pet.
Never disregard professional advice or delay in seeking it because of something you have read on this website.

Knuckling is when the front paw or hind paw on a dog tucks underneath the body so that the dog is left walking on its knuckles (hence the name). It can also be characterized by a dog walking on its tip-toes. With the front paws, this will be accompanied by the ankles jutting out forwards.

Knuckling can be caused by a spinal stroke, known as fibrocartilaginous embolism which is when fibrous cartilage obstructs the blood flow to certain vessels in the spine. However, a standard stroke within the brain does not cause knuckling.

Not without treatment. In fact, it's quite the opposite. Puppies will grow into knuckling - the larger they get the more severe the symptoms will become. It is imperative that dog owners seek veterinary advice the moment the signs begin to show in order to hopefully avoid the problem becoming too severe.

Particularly in large breed puppies, knuckling is more common than many owners are aware of. This is because the most common cause of knuckling in puppies is a poor diet selection. If food is chosen for a large breed puppy that is not specifically designed to meet their needs it can result in malnutrition which can trigger knuckling when they start to grow more rapidly as the tendons and ligaments can struggle to keep up with the skeleton's rate of growth.

Dogs
Hip Dysplasia in Dogs: Symptoms and Treatment
The Best Joint Supplements for Dogs in 2022

Dogs
The Best Method for Helping Your Dog Build Muscle