The Best Dewormers for Dogs (Review) in 2021

Your guide to this review today is by dog trainer Destin Benoit
Published March 12, 2018
Support us! Mypetneedsthat may earn a small commission from affiliate links in this article. Learn more

Intestinal parasitism is a major health problem among dogs especially those who spend some time outdoors or those who get in contact with objects that are contaminated with these parasites. Allowing these intestinal worms to grow can adversely affect the health of your pooch, leading to malnutrition and a host of other problems. This is why it is crucial that we get rid of these intestinal worms through the use of dewormers. Unfortunately, the market is littered with products that do not really kill these pests or that they are effective in doing so yet come with a host of serious side effects. What you need is the best dog dewormer that is proven to be both effective and safe for your pooch. Here are 7 of the best in the market today.

The Best Dewormer for Dogs 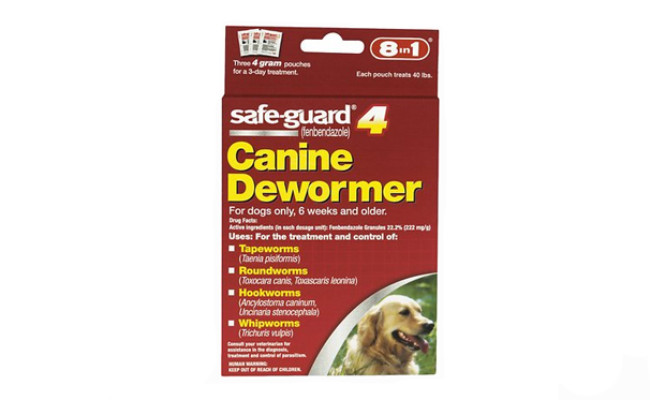 Fenbendazole is the active ingredient of 8-in-1 Pet’s Safe-Guard Canine Dewormer. This is one of the safest and most effective anthelminthics according to veterinarians. Regrettably, it doesn’t kill one of the most common tapeworms known to infect dogs – Dipylidium caninum. You will find its granule formulation to be exceptionally useful since this makes it a lot easier to mix with your young puppy’s food.

The good thing with Safe-Guard is that it can be administered to pups as young as 6 weeks old (although we’ve seen products that can be given much earlier) and pregnant dogs as well as pooches that are currently infected with heartworms. Giving Safe-Guard now will confer protection for your pooch for about 6 months.

Can be given to puppies at least 6 weeks old 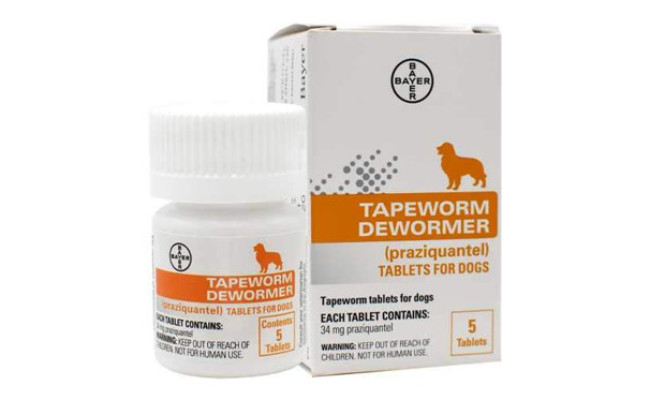 If you’re not really concerned about whipworm, roundworm, or hookworm infestation in your pooch, but are generally concerned about Dipylidium caninum and Echinococcus granulosus infections as well as other tapeworm infections, then you’ll find confidence in Bayer’s Tapeworm Dewormer. You can look at it as something that is very specific for dog tapeworm infestations and can be easily given to a 4-week old puppy. It comes as a crushable tablet so you have two choices when it comes to its administration. You can easily give it as is per mouth or ground it to bits for mixing with your pet’s food.

Either way you can trust on the reputation of Bayer Animal Health to provide your pooch with amazing tapeworm removal results.

Can be given to puppies as young as 4 weeks old

Tablet can be crumbled for easier administration with food 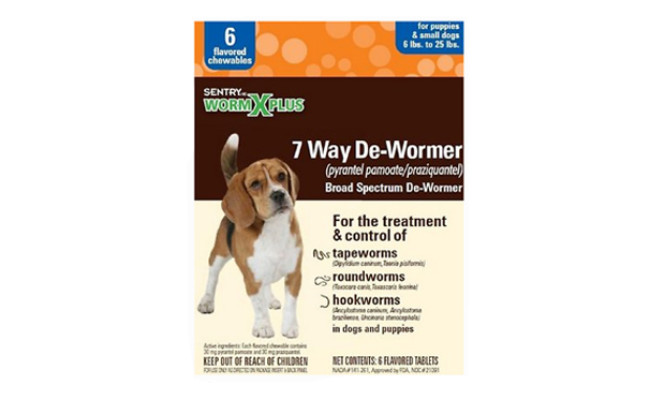 HC WormX Plus is a dog dewormer that contains two of the most trusted anthelminthics in veterinary medicine. While the WormX Plus doesn’t really give age recommendations, it does provide a minimum weight recommendation of 6 pounds to help get rid of 7 different species of worms except whipworms. It also comes in flavorful chewable tablet formulation making it super easy to administer.

However, if your dog’s main issue is whipworm infestation such as T vulpis, then you might want to get another brand. Also, the effectiveness of WormX Plus is only good for a month, unlike that of fenbendazole-containing products that can last up to 6 months.

Can be given to puppies weighing at least 6 pounds 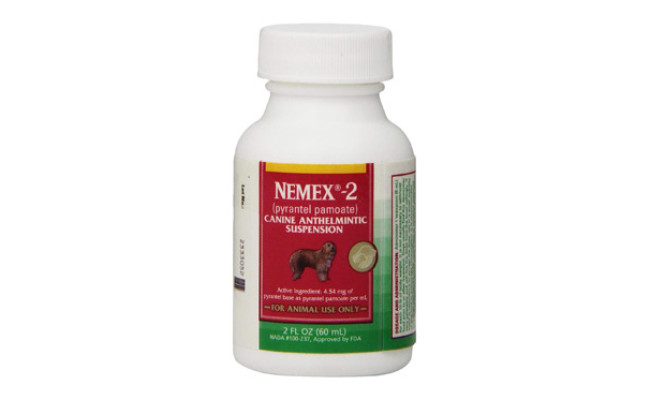 This single-ingredient dewormer from Pfizer is effective in the killing of 2 species each of roundworms and hookworms and as such will not have any effect on tapeworms and whipworms. Nemex 2 contains pyrantel pamoate and can be easily administered to puppies as young as 2 weeks old because of its liquid suspension formulation. The same formulation is guaranteed to be palatable so dogs will not have any issues licking it straight from the cup or bowl. However, in instances where the pooch simply isn’t cooperating, Nemex 2 can be mixed with a small amount of dog food to help in the administration.

Kills 2 species each of roundworms and hookworms

Can be administered to dogs as young as 2 weeks old 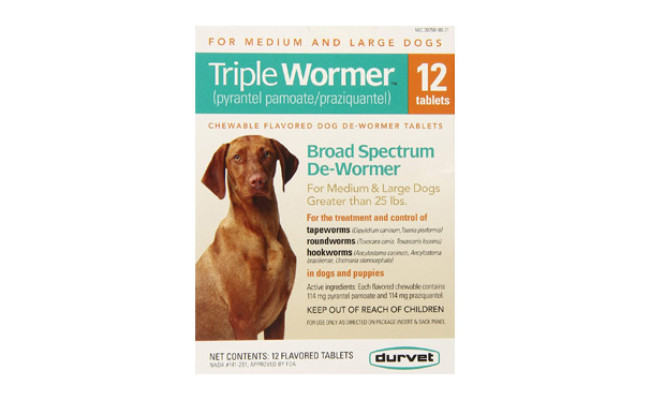 Durvet’s Triple Wormer Broad Spectrum Dewormer can be viewed as having the same characteristics and formulation as the HC WormX Plus which kills the same species of tapeworms, hookworms, and roundworms in a chewable tablet formulation. The main difference is that Durvet’s Triple Wormer costs significantly less than the HC WormX Plus on a per-tablet basis.

It also has a minimum weight recommendation of 6 pounds using its 30 mg pack. As always, if your pooch’s main concern is whipworm infestation, then you clearly wouldn’t be treating your dog’s infection with the Triple Wormer; you’ll need something else. Initial deworming with the Triple Wormer requires administration of 2 doses spaced 2 weeks apart for maximum effectiveness. 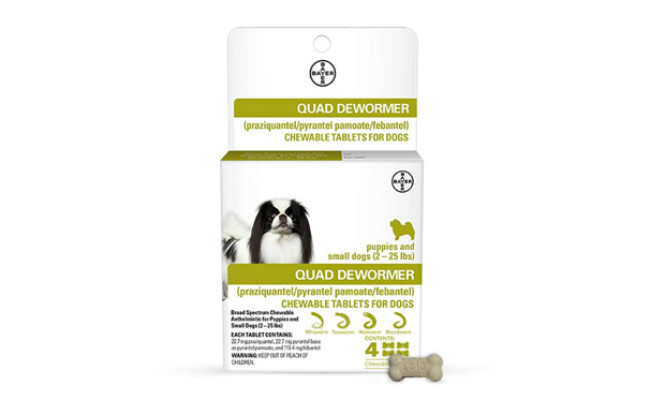 There are a few things you’ll love about the Bayer Quad Dewormer. First, it’s one of the first anthelminthics to contain 3 active ingredients in one formulation to give is exceptional broad spectrum of anti-intestinal parasitic activity. Second, it kills 7 species of intestinal worms including D caninum that is typically not addressed by fenbendazole-containing anthelminthics. Third, it comes in flavored chewable tablets allowing for easy administration. Fourth, it can be given to pooches that weigh at least 2 pounds. The blend of ingredients has been shown to produce the passing of worms in as short as 8 hours.

Kills 2 species of tapeworms, 2 roundworms, 2 hookworms, and a specie of whipworm

Combination of broad spectrum anthelminthics including praziquantel, pyrantel, and febantel

Can be used on puppies weighing at least 2 pounds

The market is literally flooded with a lot of dog dewormers that promise instant results within a few days. Some actually work but with considerable side effects. While there are products that are labeled as Over-the-Counter dewormers, we strongly advise you against buying these without first checking with your veterinarian since different dogs will react differently to the same ingredient. Safety is a very important consideration whenever buying ‘medications’ for your pooch as you don’t want to add insult to your dog’s predicament.

What Are the Symptoms of Worms in Dogs?

There are 4 very common intestinal worms that infest the gut of dogs as well as other pets. These include tapeworms, roundworms, hookworms, and whipworms, with the first 2 types of intestinal parasites being large enough to be readily seen in the stool of dogs. Unless you bring your pooch to the veterinarian for a routine clinical evaluation with stool examination, it is often quite difficult to tell if your pooch has worms, especially in the early stages of the infestation.

The main issue with intestinal parasites is that they compete with normal cells in the absorption of nutrients found in the food of your dog. Instead of these nutrients being absorbed and delivered to the cells of the dog’s body, these nutrients are consumed by the parasites themselves. This is the reason why they are called parasites in the first place since they feed off their hosts.

The symptoms of intestinal parasitism in dogs are closely attributed to two fundamental problems: malnutrition and worm volume growth. These can be manifested as follows.

How Do Dogs Get Worms?

There is no single mechanism upon which dogs can get intestinal worms. However, given the fact that these parasites are mostly confined to the gastrointestinal tract, then their mode of transmission will definitely involve passage through the dog’s mouth and the rest of its digestive tract. Here’s a look at how dogs get these common worms.

There are two methods upon which dogs can get hookworms. The first is through direct ingestion of the eggs that are typically found in the stool of an infected dog. The second is more spectacular in the sense that it underscores the uniqueness of these intestinal parasites. When eggs are passed in the stool, they hatch larvae within 5 days. If they are not ingested by another dog, these larvae crawl on the surrounding soil. If a dog walks on this soil, the larvae can penetrate the dog’s skin in between its paw pads. Once it is through the dermis, it enters the bloodstream, reaches the lungs, crawls up the trachea, and then swallowed towards the colon. Technically, regardless of the route, they will always end up in the colon, although the second mode of transmission can produce other symptoms as the hookworm larvae are migrating.

These intestinal parasites are very cunning, to say the least. Dogs get infected when they ingest anything that has been contaminated with dog feces containing roundworm eggs. The eggs hatch in the dog’s gut, releasing larvae which penetrate the wall of the intestines. From there, the larvae invade the bloodstream and reach the alveoli of the lungs where the little critter crawls up the airway only to be coughed up and swallowed back to the gut. If the dog is pregnant at the time of larval migration, larvae can travel to the placenta and infect unborn puppies. If the dog is nursing, the larvae can also be found in their milk. Dogs can also get roundworms by ingesting intermediate hosts that feed on encysted eggs.

Tapeworms have a very unique way of getting transmitted to dogs: they need an intermediate host. The mode of transmission is generally the same as in any other worm. It starts with the passing of embryonated eggs in the feces which can be ingested by intermediate hosts such as sheep, pig, cattle, and many more. In the intestines of these intermediate hosts the eggs hatch, releasing larvae and penetrating the liver, lungs, and other organs. When these organ meats are given to dogs without proper preparation and cooking, the larvae are transmitted to dogs and mature into adults, ready to start the cycle anew.

The adult whipworm lays eggs inside the large intestines of an infected dog. When these eggs are pushed towards the anus and are evacuated together with the stool of the dog, they get embryonated in the environment within 2 to 4 weeks. During this period, an infective larva is already developing. If a dog licks the soil that has been contaminated with dog feces containing the whipworm eggs, the eggs are passed down to the new dog’s colon where the larvae are released into the intestinal epithelium. From there it grows to become an adult whipworm.

How Can I Deworm My Dog?

While there are plenty of dog dewormers that claim they don’t need a prescription for its use, you should know better. While these products may have been proven safe and effective, you can still not be pretty sure when it comes to your dog. That is why it is very important that you bring your pet to your veterinarian first so he can make a very thorough evaluation on what dog dewormer will be most appropriate for your pooch.

When it comes to deworming schedules, the Centers for Disease Control and Prevention together with the American Association of Veterinary Parasitologists have forwarded the following guidelines.

There are also a few things you have to keep in mind when deworming your dog.

Dogs explore most of their world through their mouths. Unfortunately, this also exposes them to the risks of ingesting eggs that can turn into intestinal worms. While these dog dewormers have been proven safe and effective, knowing how to properly deworm your dog by adhering to a strict deworming schedule is crucial.