Lockjaw in Pitbulls – Do Pitbulls Have Lockjaw?

By MyPetNeedsThat Staff
Last Updated July 8, 2022
Every product and service on My Pet Needs That is independently selected by our editors, contributors, and experts. If you purchase something through our links, we may earn a referral fee. Learn more

Pit Bulls, no matter what type, cannot seem to catch a break and shake off their bad rap. Despite being one of the most loyal and sweet-natured breeds around there are still a lot of misconceptions that ultimately damage the Pitbull’s reputation. One of these rumors is that they are capable of locking their jaws.

Originally bred to take active roles in bull-baiting, there’s no doubt that all Pit Bulls have a terrifyingly strong bite but are they capable of locking their jaws? Read on to learn more about lockjaw in Pitbulls including what lockjaw really is and what myths surround it. 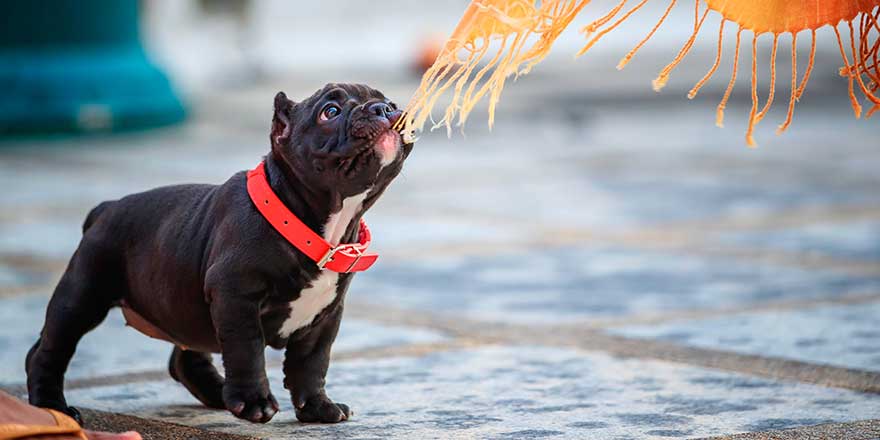 First, it’s important to understand that a lockjaw is more than just the clamping of the jaw. In fact, lockjaw is actually a rare disease known as tetanus and is not common for dogs to fall victim to.

Essentially, dogs that are infected with the offending bacterium will have difficulty swallowing and breathing in general. However, with this generalized tetanus, the facial muscles will also be affected as they will tighten severely which results in locking jaws.

Depending on the amount of bacterium that invades your dog’s nervous system, symptoms and severity will vary completely. As you can imagine, the more bacterium that is absorbed the more acute the symptoms.

Often this disease can be contracted if your Pitbull has come into contact with soils and dead animals that are harboring the bacterium. In addition to this, it can also carry in places containing low oxygen levels. Usually, the infection enters via a wound and makes its way through the tissues and ultimately the nerves.

Although this disease is uncommon in dogs, it’s still vital that you remain vigilant. If your Pit Bull’s favorite hobby is digging or often expresses an interest in dead animals, keep a close watch on them. The second you believe your dog is exhibiting any of the symptoms above, you must contact your vet immediately.

What Happens if Lockjaw isn’t Treated?

The good news is that lockjaw is treatable but more serious cases may require blood tests, physical therapy, and overnight hospital stays. If left untreated, tetanus results in severe breathing complications that can lead to death.

Moreover, the rigidness of the jaw can make it near impossible for dogs to eat or drink which, over time, can cause weight loss and dehydration. All of these risks can be easily prevented by being able to identify the signs of lockjaw. If you spot the disease early it’ll be so much easier to avoid further complications and implement treatment.

What Dogs Have Lock Jaw?

Since lockjaw is actually the result of a rare disease, it’s possible for many other breeds to become infected but no dog has the ability to lock its jaws on demand.

Some breeds may be more prone to contracting tetanus than other dogs. These breeds include:

It is also suggested that a lot of large breeds are susceptible to contracting tetanus which can be fatal. However, no matter what sized dog you have, if you see any signs of the disease you must ensure that you see your vet as soon as possible.

Do Pitbulls Have Lock Jaw?

Thanks to the internet and other forms of media, misinformation spreads like wildfire. To iterate, no dog breed has the ability to lock its jaw into place. To add, many studies conducted have specifically proven that Pitbull jaws are incapable of latching into place, and due to their structure, they lack a locking mechanism.

Do any Pit Bull Dog Breeds Have Lockjaw?

If you’ve taken a stroll across the internet you may have come across some conflicting information that we can set straight here. It is a tiresome myth that Pit Bulls can lock their jaws. Some resources may state that the American Pit Bull Terrier is capable of locking but this isn’t the case.

How Strong is a Pitbull’s Bite? 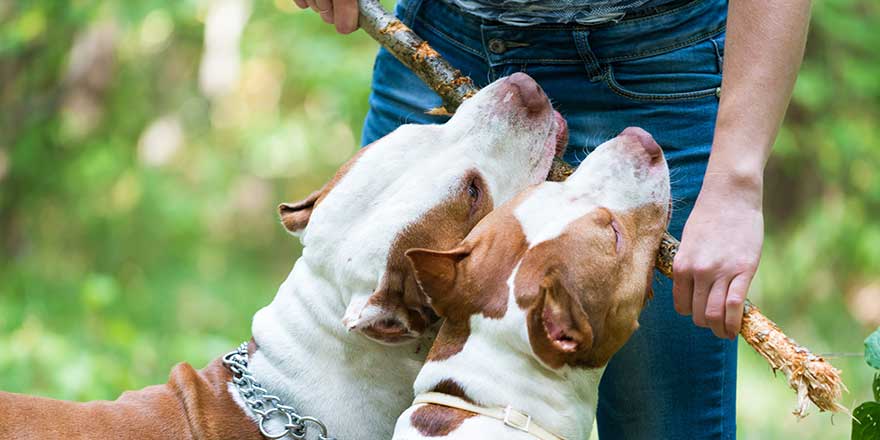 It’s summarised that all Pit Bull breeds have a bite force that can range from 230 – 330psi which is to be expected from breeds that were specifically developed for blood sports such as bull-baiting. Similarly, Siberian Huskies and German Shepherds have ranges going from 238-320 psi.

As intimidating as this sounds, and although they can land a harsh and fatal bite force, a Pit Bull’s bite is not nearly as strong as other breeds out there. Like the German Shepherd and Husky, they are actually considered below average. To compare, a Cane Corso has a bite force of at least 700 psi.

How is Bite Force Calculated?

The bite force is measured in ‘psi’ or pounds per square inch. Of course, the strength of the bite can depend on different circumstances such as the size of the dog, its jaw structure, what they’re biting, etc.

Since a Pitbull’s bite force isn’t as powerful as other dogs you may be wondering what makes their bite fatal. Like other terriers, Pitbulls tend to bite down as opposed to biting and then releasing straight away. To add, when they clamp their jaws down, they will sometimes begin to shake their heads violently which can ultimately cause more casualties.

Note: Pit Bulls are notoriously stubborn dogs which is another reason why aspiring owners should get their puppy trained when at an appropriate age. It’s due to this personality trait that Pit Bulls will refuse to let go once they’ve sunk their teeth into something.

The Difference Between Clamping and Locking

Locking is where you will be physically unable to remove the dog’s jaw due to it being seized into place. If you attempt to open the jaw, you will risk seriously harming the dog. However, camping is done at will and you can easily find ways to have the dog release its grip.

So, Where Did the Pitbull Jaw Locking Myth Come from?

Surprisingly, the Pitbull lock jaw myth has been around as long as they have, going back all the way to their bull-baiting days. Essentially, these dogs (as well as many other dog breeds) were purely bred to fight and survive by any means necessary.

The harsh reality is that Pit Bulls used to target specific, vulnerable areas of the bull to bite. When the dog sunk their teeth into the animal, they would clamp down as hard as possible and not let go. In a lot of instances, they would then begin to pull and violently shake their heads to cause as much damage as possible.

This is the reason why Pit Bulls will shake their heads when they’ve got hold of a toy. It’s their natural instinct to violently rag from side to side.

Sadly, in recent decades the number of fatal Pitbull bites against humans has risen and they are unfortunately considered one of the most dangerous dog breeds followed by the Rottweiler. Due to this, it is somewhat understandable why many believe that Pitbull-type dogs can lock their jaws, given the amount of damage they can do to a human.

With this in mind, it’s still important to consider what makes a dog attack a human. Pitbulls were never bred for human aggression and were only originally developed for bull-baiting. However, in recent years, they are regarded as one of the friendliest and most loyal dogs and despite their bad reputation, they are well-loved by pet owners and celebrities.

What Makes a Pitbull Attack?

There are a few reasons why a Pitbull may feel the need to attack. In some instances, they may merely growl or snarl, but some dogs may snap or even attack leading to a severe or fatal bite. 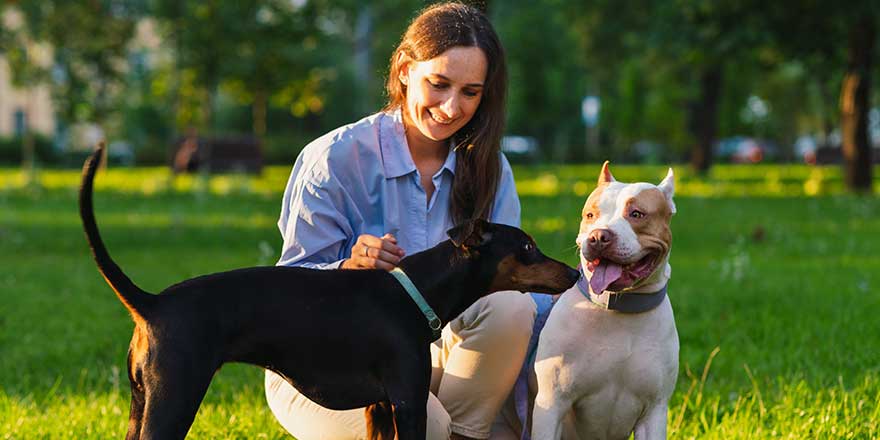 The absolute most effective way to prevent your Pit Bull from biting is by raising them appropriately in a healthy and happy home. The fact is, there’s no such thing as bad dogs, especially if they’ve been given the best start in life. Dogs that are raised in a happy home with love, patience, and discipline are nowhere near likely to become human aggressive or inherently dangerous.

Caring for your canine not only provides enrichment for their overall health but will also preserve and nurture their mental well-being. Feeding them a high-quality diet and taking care of their skin and coats will work wonders and keep them happy and healthy

However, looking after their basic needs will only do so much, which is why it’s vital that your dog is also disciplined. Like any other dog breed, Pitbulls will need early socialization so they are comfortable around other dogs and animals. If you neglect to socialize a dog, you may struggle when introducing new members of the family or simply going for a walk where you’re likely to encounter other dogs.

Moreover, although Pitbulls aren’t inherently dangerous, aggression is associated with a lot of terrier breeds, so they will still need to be obedience trained from puppies. Not only will this prevent bad habits or behavior as they get older but it will guarantee that your pooch will understand your commands and can even help you bond with your pup.

To Sum Up – Do Pitbulls’ Jaws Lock?

To summarize, Pit Bulls are unable to lock their jaws at will, and nor can any dog breed for that matter. Essentially, when a dog locks its jaw, it’s likely to have contracted tetanus which causes the muscles to seize and become rigid all over the body. If this happens, it’s imperative that you take them to see a vet immediately as it has the potential to become fatal.

No. Pitbulls do not have any kind of mechanism within their jaw to be able to lock it.

No dogs can lock their jaws at will. The only time a dog will develop a lock jaw is if they contract tetanus.

Although Pitbulls are responsible for a large number of fatal dog bites, these breeds are not naturally aggressive. In fact, to a lot of dog owners, they are considered one of the friendliest breeds. However, if led astray or raised in an unhealthy environment, they can develop unsavory habits and behaviors.

Hopefully, you will never have to be in this situation. However, if you are in this unfortunate position, you can use a break stick or twist the dog's collar which will eventually force them to loosen their grip.

How to Make Your Pitbull Muscular in 3 Steps

Dogs
How to Make Your Pitbull Muscular in 3 Steps
How Long do Pitbulls Live?

Dogs
Are Pitbulls Hypoallergenic Dogs?
All You Need to Know About the Red Nose Pitbull

Dogs
All You Need to Know About the Red Nose Pitbull
Types of Pitbulls: Learn Their Differences

Dogs
Types of Pitbulls: Learn Their Differences
How Much do Pitbulls Shed?

Dogs
How Much do Pitbulls Shed?