How To Tell If Cats Are Playing or Fighting

By Sharon Parry
Last Updated March 14, 2022
Every product and service on My Pet Needs That is independently selected by our editors, contributors, and experts. If you purchase something through our links, we may earn a referral fee. Learn more

Cat behavior is both fascinating and difficult to interpret. At no time is this more obvious than when cats are playing or fighting with another cat. But which is it? If you have more than one cat living in your home, this could be something that happens on a regular basis. Cat owners see it in adult cats as well as in kittens. We have compiled all the best expert opinions on how to tell what is going on with this cat’s behavior. So, if you are asking are my cats playing or fighting, you have come to the right place!

How Cats Socialize with Other Cats

Kittens from the same litter mock fight all the time using play bites and scratches on their sisters and brothers. It is a way for them to experiment with how hard you need to bite to get a reaction. They also learn about stalking, pouncing, and chasing by using play aggression.

As they get older, cats tend to be solitary animals but they can also live together in the same social group. You will often see felines in households where there are two cats or even in multi-cat households grooming each other. They may even sleep next to the other cat. Play fighting can be a part of this relationship.

Cats that are settled into a household together are said to be ‘affiliated’ and they are less likely to have a real fight. However, they could still fall out if they have to compete for resources. 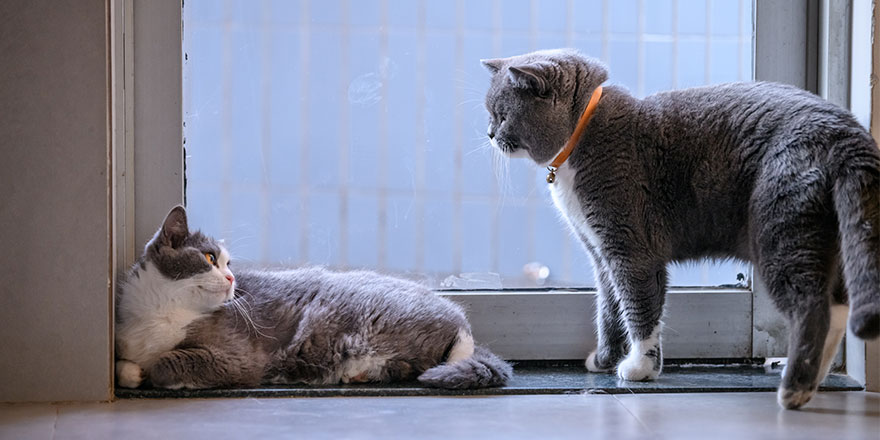 So, you are most likely to see play fighting between two cats from the same litter when they are still young or between cats that are used to living together. If you see two cats playing or fighting and they already know and get on with each other – it is more likely to be playing. If it is between two cats that have never met before, it is more likely to be fighting. Cats will take a long time to get to know each other before they get friendly enough to have a play fight!

Playing at fighting is most common in kittens at around 8-10 weeks of age so any interaction at this age is almost certainly playing.

These play sessions usually take place in an environment that has plenty of stimulation such as boxes, a cat tree, and other obstacles. It often involves the entry and exit holes of such toys and involves a lot of chasing and leaping around!

Top Signs That Cats Are Only Playing

By carefully observing your cat’s body language, you can soon tell if this is a play session or a fight. Here are the main things to look out for:

Top Signs That Cats are Fighting for Real

Sometimes, you may spot two cats interacting in a way that suggests they are not getting on well. If you are wondering are my cats playing or fighting, these are the main signs of a true catfight: 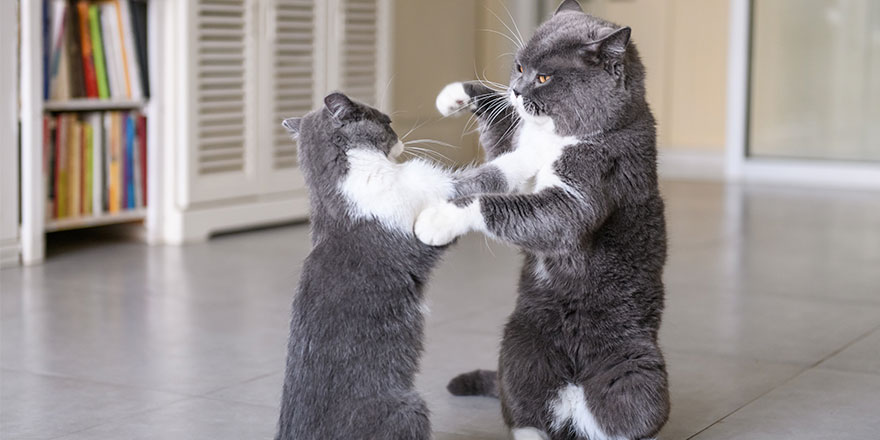 Reasons Why Cats Get Into Fights

If you can understand why cats get into fights, it will help you to stop them from breaking out in the first place. Here are some of the main reasons why cats fight according to cat behavior experts.

New cat in the home

This is the single most common reason that cats fight. They can be quite territorial and do not like another cat being introduced into what they view as their home. Often it is the older cat that has the issue and the more cats there are in the house, the worse the problem can be. You can overcome this by making the introduction gradual, using plenty of treats and possibly separating the cats with a baby gate.

There is a critical point in a kitten’s development when they learn how to get on with other cats – it is called socialization. For most cats, this is between 2 and 9 weeks. Hand-raised kittens miss out on this and can develop into nervous and aggressive cats that get into fights. Speak to your vet or to a cat behavior expert for advice on how to help your kitty if this applies to them.

Cats will fight if they both want the same thing. Although domestic cats usually have plenty of food and shelter, they can compete for human attention. Try to make sure that you have fun with all your cats in an equal way.

Many of us have woken to the sound of tomcats howling and spitting at each other outside our bedroom windows. These disputes are usually about territory and who it belongs to and are most common amongst unneutered males. Cats can get badly injured in these fights.

Breeding females can be particularly aggressive. A mother cat will fight ferociously to protect her kittens. If your cat is breeding, it may be best to keep other felines away from her for a while.

If cats that have previously got on very well suddenly start fighting, it is worth investigating if one of them has become ill. There are several medical conditions that can make a cat more aggressive and these include epilepsy, rabies, dental disease, and hyperthyroidism. It could also be due to the sensory and cognitive decline in an older cat.

It is worth getting your cat’s teeth and general health checked out by your vet.

Some cats are simply born grumpy! Recent research has shown that there are cat genes (one is connected to a biological system called the oxytocin receptor) that make cats more irritable. In the future, it may be possible to test a cat for the presence of these genes.

Yes, lots of cats love to play. They find it fun and most cats enjoy interacting with other felines. However, some cats prefer a solitary life and do not like company at all. A kitten will enjoy a lot of play fighting, for them playtime is a learning experience.

If you are satisfied that your cats are playing and neither cat is getting hurt then certainly you should let them get on with it. They will stop when they have had enough. However, if you notice that one cat looks as if they need a break, it is time to step in.

Yes, it is very normal behavior for a kitten and for a young cat and for cats that know each other very well. However, it would not be normal for play fighting to take place between a senior cat and a new cat that you have introduced to your home. It will take a while for the younger cat and your senior to bond sufficiently to have a play fight. This may never happen at all.

You need to be very careful about how you break up a cat fight because you could get hurt. Start by making a loud noise to distract the cats attention. You could yell, slam a door, stamp your feet or bang some pots together. Another option is to create a barrier between the cats using a piece of card or a cushion.

Do not try to break up the cats by putting your bare hands between them. The cats could scratch and bite your hands and may even lunge at your face. The cats can re direct their aggression towards you and this can result in a nasty injury. If you do get bitten by a cat, you need medical attention because cat bites often result in serious infections.

Once you have separated fighting cats, you need to prevent it from happening again. For a few days, keep the cats in separate rooms. You will need two sets of toys and food two litter boxes. Once things have calmed down, you can start to carefully reintroduce the cats to each other. You will need to supervise this at all stages.

Cats
Understanding Cat Behavior and Body Language
Why Do Cats Like Being Pet?

Cats
Why Do Cats Like Being Pet?
Why Does My Cat Headbutt Me?

Cats
Why Does My Cat Headbutt Me?
My Cat Can’t Meow: 11 Reasons For Feline Voice Loss

Cats
My Cat Can’t Meow: 11 Reasons For Feline Voice Loss
Why Do Cats Arch Their Back?

Cats
Why Do Cats Arch Their Back?
Cat Characteristics: Why Does My Cat Slow Blink at Me?

Cats
Cat Characteristics: Why Does My Cat Slow Blink at Me?