Why Do Cats Arch Their Back?

By MyPetNeedsThat Staff
Last Updated January 12, 2022
Every product and service on My Pet Needs That is independently selected by our editors, contributors, and experts. If you purchase something through our links, we may earn a referral fee. Learn more

If you’re a cat owner, we’re sure that you’ve noticed your cat arching their back at various points throughout the day. It may have happened while they’re being petted or while they’re having a good stretch, but do you know why your cat’s body arches like that? Let’s dive into the world of feline body language and find out.

Why do Cats Arch Their Back?

If you have ever asked yourself “what does it mean when a cat arches its back?”, you’re in the right place. To understand why your cat arches their back, we need to look at individual situations to explore their behavior and what might be causing them to arch. When a cat arches their back, it can be accompanied by their hair standing on end or a wide yawn. Cats display their behavior quite openly; our feline friends are always all too happy to tell us when they’re angry or if they’re just being a scaredy cat. So, let’s start there – with your cat displaying fear through their body’s actions. 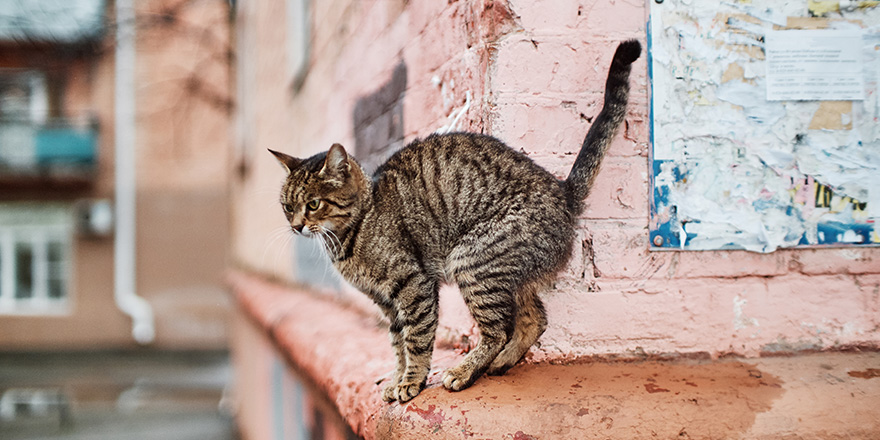 Your Cat is Scared

When a cat is scared they may arch their back, but not all cats use this technique to show their fear. Some cats will show that they’re scared by the fur of their tail puffing up until it resembles something like a feather duster. Other cats will become aggressive and try to make themselves scarier than the thing that has scared them.

This usually means seeing your cat’s front get very low to the floor while they arch their back down and puff up their tail. They usually hiss once or twice and may try to attack whatever has startled them.

You’ll see this happen a fair bit in multi-cat households because body language is one of the main ways that cats communicate with each other. If your cats arch their backs at each other frequently, you may need to socialize them more. It could be that one cat isn’t particularly happy around others. This commonly occurs in rescue cats when they’re getting used to a new home.

When a cat’s arched back isn’t accompanied by any growling or hissing, they may just be stretching! Not every strange cat behavior is done in response to a perceived threat.

If you see your cat with an arched back and their little front paws stretching out, then you can be sure that they’re just stretching and don’t need any assistance from their humans. This is normal cat behavior and they’ll stretch like this often.

Cats that are in a playful food will often arch their backs before launching into an attack on any cat, human, or toy that they’ve got their eyes on. From this position, the cat is utilizing their hunting instincts, which are a huge part of the way they play and get to know the world around them.

Pouncing, running, jumping, and hiding are all part of the daily routine of a happy cat. If you’re worried that your cat might feel threatened and that’s why they’re in an arched pose, listen for hissing and other aggressive noises. Cats become very verbal when they’re trying to scare another kitty away.

Happen to be petting your cat when their back arches? It’s likely that you’ve hit one of your cat’s soft spots, which is just an area that they enjoy having pet. An arched back is an invitation for you to keep petting them, and it sometimes provides easier access to areas that your kitten likes stroked.

In this situation, an arched back is accompanied by purring, head butting, and the occasional lick. If you’re lucky, your cat may even start grooming you. Felines are peculiar creatures!

Common soft spots that you can use to get your kittens all happy and playful are:

Of these four areas, their back and the area above their tail are the most likely to put your cat into an arched back pose. Don’t pet them too much though, or they’ll think you want to play and you’ll end up with a few lovely bite marks.

This is a bit of a strange one, even for felines, but cats with an arched back may simply be saying hello to another cat. There are scent glands around your cat’s behind that another cat will sniff to greet them and make sure they know each other. Dogs do the same thing.

If your cat is displaying their bottom to you, it’s because that act is part of their natural behavior. They’re just saying hello. As humans, we find it weird and a bit uncomfortable to have our cat’s butt shoved in our face, but they probably think handshakes are just as strange.

The Danger Zone: When to Stop Touching Your Cat

Imagine this scenario. You’re petting your cat, they’ve let out a purr or three, they’re arching their back, and seem perfectly relaxed.

As you pet them, you notice that the muscles in their body tense and they seem like they want to leave. If this happens, let your cat leave. Cats will tell you when they want to be petted and when they don’t, but if you keep petting them when they want to eat, sleep, or play, then you’re going the right way to end up with their teeth in your hand.

If your cat has shown an aversion to being touched or picked up, don’t force them into those situations. This is common in rescue cats, strays, and cats that have been in shelters for long periods of time. It’s worth going through some socialization training when your cat shows aggression if they’re touched.

You should also stop petting your cat if they growl, hiss, or bite you. 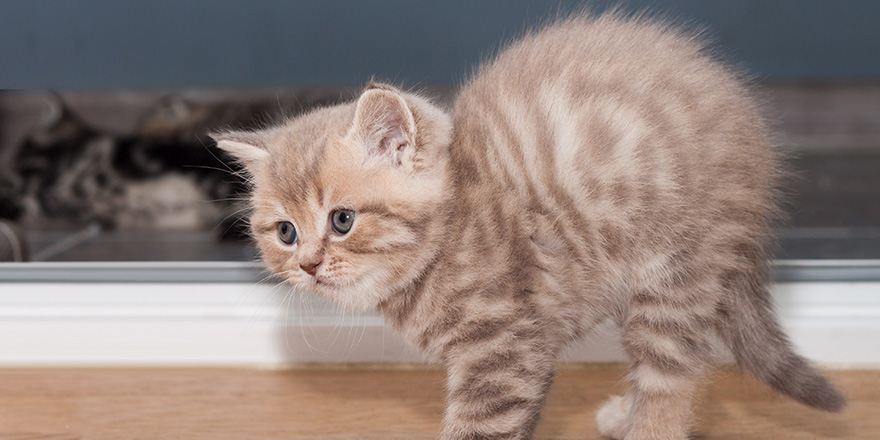 How to Tell if Your Cat Likes Being Petted

A cat who enjoys being stroked will often head butt you or rub up against you. They may purr, but not all cats purr when they’re content.

Any of these positive signs will tell you that your cat is happy about what you’re doing and wants you to continue:

An especially content cat will sit in the popular “loaf” pose with their tail slowly waving from side to side. This is the ultimate happy cat pose, and they’re very likely to fall asleep while they’re doing this. It’s best to stay as still as possible, but otherwise, you can continue doing whatever it is you are doing.

Always remember to pay close attention when your cat is arching their back. Their body language will tell you if they feel uncomfortable with what’s going on around them or if they are happy because you’ve found a sweet spot to pet.

Why Do Cats Hiss?

Cats
Why Do Cats Hiss?
Why do Cats Bring Home Dead Animals?

Cats
Why do Cats Chatter at Birds?
What is Caterwauling and Why do Cats Do It?

Cats
What is Caterwauling and Why do Cats Do It?
Why Do Cats Blep? Everything You Need to Know

Cats
Why Do Cats Blep? Everything You Need to Know
Why Do Cats “Silent Meow”? What’s the Meaning?

Cats
Why Do Cats “Silent Meow”? What’s the Meaning?