By Eloise Hands
Last Updated January 17, 2022
Every product and service on My Pet Needs That is independently selected by our editors, contributors, and experts. If you purchase something through our links, we may earn a referral fee. Learn more

Hearing your cat meow when they see you can be a heartwarming experience – It’s the perfect way for your feline friend to communicate how much they love you. Or to tell you that you need to hurry up and feed them before they scratch the furniture in protest. Either way, it’s the best way for your cat to get their personality across, quirks and all! But what does it mean if that beautiful voice box decides not to play ball? What if your cat can’t meow, or if their meow becomes raspy or wheezy?

There are several reasons a normally vocal cat might lose its voice. Some are more serious than others. So let’s take a look at what the main reasons might be for your cat’s meow disappearing. 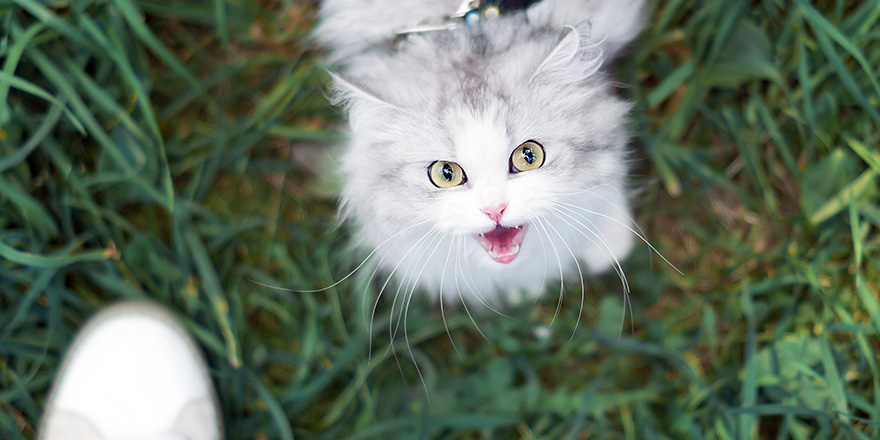 The Top 11 Voice-Affecting Afflictions For Cats

Upper respiratory infections can be passed down from pet parents to their cats believe it or not. It’s not often that an upper respiratory infection can cause voice loss with a cat, as it does with humans, but it does often cause a sore throat which can lead to a raspy, or wheezing tone. This is due to the strain on the vocal cords causing my constant coughing.

Other symptoms of upper respiratory infections include:

If the infection does not seem to be clearing up after a few days, it may be that your cat requires antibiotic medication and anti-inflammatories to help clear it away. Quick action can also help to reduce the risk of voice loss and laryngitis.

Laryngitis in cats is as common as it is in humans and is often the unfortunate side effect of a chest infection owing to the volume of bacteria in the throat during the infection period. Laryngitis is the result of the cat’s larynx becoming significantly inflamed, causing pain and a hoarse voice. Laryngitis can also be a sign of calicivirus or infectious rhinotracheitis.

It is possible for Laryngitis to result in a complete loss of voice for a few days, or when a cat develops laryngitis it sometimes opts to remain silent in order to rest its throat. There are also a variety of additional symptoms that accompany feline laryngitis that may help you to decipher whether or not this is the problem, including:

Though more prevalent in dogs, laryngeal paralysis can still affect cats. This is often something that can happen with older cats and causes degeneration of the voice box. It is classed as a dysfunction of the voice box and can have a serious impact on your cat’s health. If your cat loses its voice as a result of laryngeal paralysis then that could be a sign of something more severe taking place.

Throat paralysis can cause several other complications that could have a big impact on your cat’s health, due to the vocal cords’ inability to open and close in response to respiratory demands. Should you notice any of the following symptoms, you should get your cat some medical attention as soon as possible:

Sudden paralysis is not unheard of and could be detrimental to your little furry friend. However, it is possible for it to be treated via a simple surgery in which one of the vocal cords is sutured into place and permanently held open to allow your cat the room to breathe comfortably.

Excessive meowing or yowling puts a lot of strain on your cat’s voice box, which can eventually lead to damage that could affect the sound of their meow or even cause them to lose their voice altogether. If excessive vocalization is something you’d noticed with your feline friend, it would certainly be worth asking what could be causing them to behave this way.

If a cat can’t stop meowing it is often a sign of stress or anxiety, especially if this is not normal behavior. In fact, anxious cats are known to meow louder than usual at their pet parent to try and get their point across that something is bothering them.

To combat this, you should try to find the source of your cat’s stress and help them to relax. You can also purchase calming cat collar and calming plug-in vaporizers that release calming pheromones.

A foreign body such as a cold virus can also cause changes to your cat’s throat such as inflammation or irritation, which could have a knock-on effect on how they sound. An indoor cat is less likely to pick up a viral infection due to its limited interactions with the outside world. However, that doesn’t mean indoor cats are guaranteed never to pick up a virus.

We would advise that owners of all types of cats (feral cats, indoor cats, adult cats, kittens) should be aware of the potential for a viral infection or illness that could cause voice loss and keep an eye out for worsening symptoms that could progress into something more dangerous. 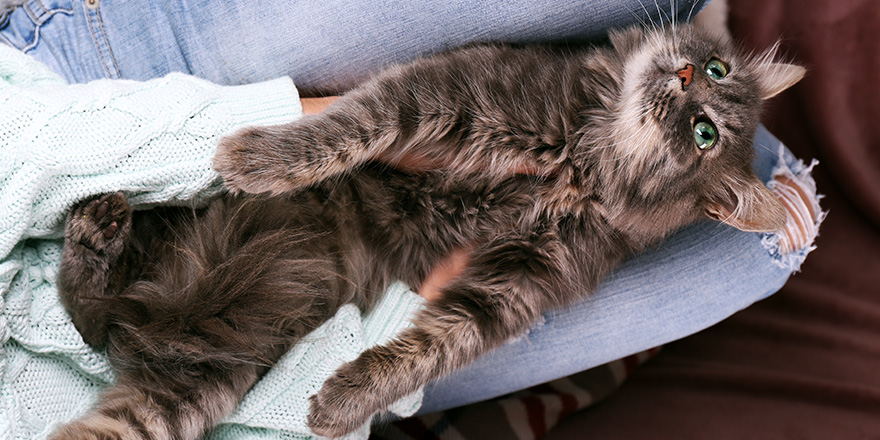 If your cat has an autoimmune disease that affects the thyroid, then this does have a chance of affecting the way that your cat sounds. Hyperthyroidism causes swelling of the thyroid glands around the vocal cords. This, in turn, can press against the vocal cords, causing them to rub together.

The swelling of the gland can be extremely uncomfortable or even painful for your cat as well as the friction caused by the vocal cords rubbings together as your cat’s meowing. If your cat stops meowing for extended periods, it could be an attempt to rest its throat if it is becoming irritating. Some of the key symptoms for recognizing hyperthyroidism include:

Cancer growths are not to be taken lightly. If you think your cat might be developing throat cancer you should get them veterinary attention immediately. It can be difficult to identify throat cancer amidst the conditions we have on this list, as many of the symptoms are the same. Though there are some symptoms that are more specific to throat cancer, as well as a myriad of other symptoms such as:

If you notice that your cat does not seem to be improving after a few days, we would always recommend arranging an appointment with your vet to have them looked at and rule out the possibility of a more serious underlying cause. Vigilance could save your cat’s life.

Damage to the vocal cords via previous infections causing scaring can create a raspiness to your cat’s voice. If your cat has previously had surgery it is possible that intubation can cause nerve damage resulting in voice changes (either permanent or temporary depending on the extent of the damage). Alternatively, scar tissue from a surgical site – perhaps from removing cancerous growths, or the removal of overactive thyroid glands – could also be the cause for why some cats lose their meow.

It is possible that a muscle disorder such as Myasthenia Gravis could be the cause of your cat’s change of voice or altogether loss. This disorder can cut off the neuromuscular junction which would have a knock-on effect on the vocal cords as the receptors for the vocal cords are attacked by the immune system. If your cat has stopped meowing and is also exhibiting the following symptoms, it could be Myasthenia Gravis, in which case you will need to seek professional advice immediately:

Myasthenia Gravis can be treated by a vet with the use of immune system-suppressing medication to prevent the system from attacking the receptors needed for communication.

An adult cat with past trauma or a history of abuse through which it was trained to stop vocalizing lest it be punished, might exhibit psychosomatic heavier. That is to say that there’s no physical reason for their loss of voice, it is all in their head due to developing in a toxic environment that taught them to suppress their meows and keep quiet.

It is possible to bring an end to selective mutism with cats, though it requires a lot of time, patience, and positive reinforcement. Before they have any hope of finding their voice again they need to be completely comfortable in their environment and willing to open up to their new owners. This could take months or even years, and should only be taken on by someone capable of putting in the time and effort to help them overcome it.

It is possible for rabies to affect the way that your cat sounds as they lose muscle control and the vocal cords become strained. If you even slightly suspect your cat of having rabies you should put the cat into isolation and contact your vet immediately. They will be able to advise you as to how to proceed. Rabies is as harmful to humans as it is to animals and can be easily passed on with a bite. The symptoms of rabies are as follows:

Sadly, rabies is an incurable virus with an elongated incubation phase during which your cat will show no symptoms and will not be infectious. When a cat is going through the incubation phase there is a possibility of preventing the infection from spreading with a booster vaccination. However, once a cat begins to show symptoms, it will be beyond assistance. A rabid cat’s health will rapidly deteriorate and they will pass away with days of the symptoms manifesting. 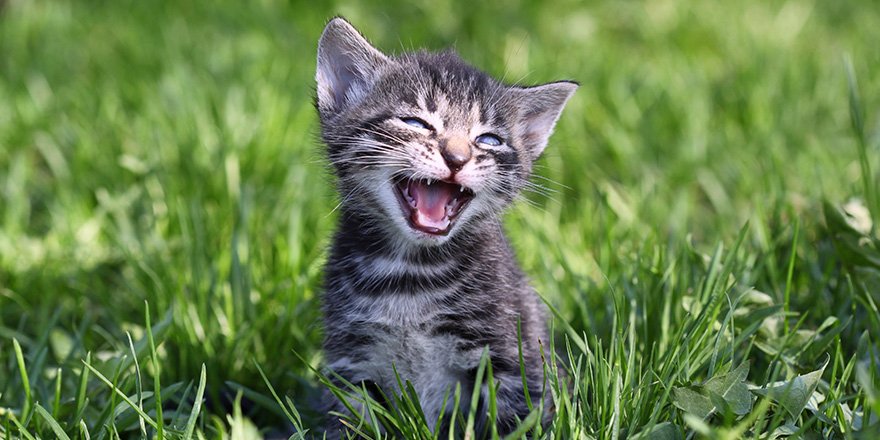 If your cat appears to be struggling with making sounds or has lost its voice entirely, we hope that this list has proven helpful in determining what could be the underlying problem. As you can see there are quite a few varied reasons as to what could be the issue, so if you’re even slightly worried that the cause could be something more severe, don’t hesitate to contact your vet for further advice. After all, that’s what they’re there for!

Why Do Cats Hiss?

Cats
Understanding Cat Behavior and Body Language
Why Do Cats Eat Grass? What Does It Mean and Is It Healthy?

Cats
Why Do Cats Eat Grass? What Does It Mean and Is It Healthy?
Why do Cats Chatter at Birds?

Cats
Why do Cats Chatter at Birds?