Do Dogs Ever Get Tired of Barking?

By MyPetNeedsThat Staff
Last Updated April 18, 2022
Every product and service on My Pet Needs That is independently selected by our editors, contributors, and experts. If you purchase something through our links, we may earn a referral fee. Learn more

What is the most common reason that dogs bark so much? The short answer is that there are several reasons that your dog could be barking, and without looking at other factors, there’s no definite way to tell if it’s their behavior or something environmental. In this guide, we uncover the reasons that some dogs bark so much, and what you can do to help them.

Do Dogs Ever Get Tired of Barking?

Can dogs get tired of barking? That’s a good question, and it’s one that does eventually pass through the minds of dog owners everywhere. There are such cases where over-barking in dogs is caused by medical conditions. Your dog may be trying to tell you something is wrong the only way they know-how, but this isn’t a common cause of excessive barking.

Your dog won’t ever tire of barking, and they aren’t annoyed by their own sounds. They can, however, get tired physically. When physically tired, your dog’s barking may slow down or even stop for a while. Pet owners hope that this will be the end of the day’s barking when it happens, but your dog is more likely to take a quick nap before starting up again.

What dog owners need to understand is that their dog’s barking is the result of something. A dog owner will need to investigate the behavior to figure out why their dog is barking so much and how to help them – whether that’s with treatment options or environmental changes.

How Long Can Dogs Bark for?

A calm dog or a tired dog isn’t likely to bark much or for long. They bark in short bursts most of the time, lasting no longer than a few minutes.

Dogs who are prone to excessive barking will bark for longer. It’s possible for a dog to bark for days at a time, only stopping to eat and sleep. Dogs will bark themselves hoarse if they feel that they need to.

In the event that your dog has been barking long enough that they seem lethargic or their voice is going, consider talking to your vet. You should be especially concerned if this is a repetitive behavior that your dog has exhibited previously.

What to Do When Your Dog Barks a Lot 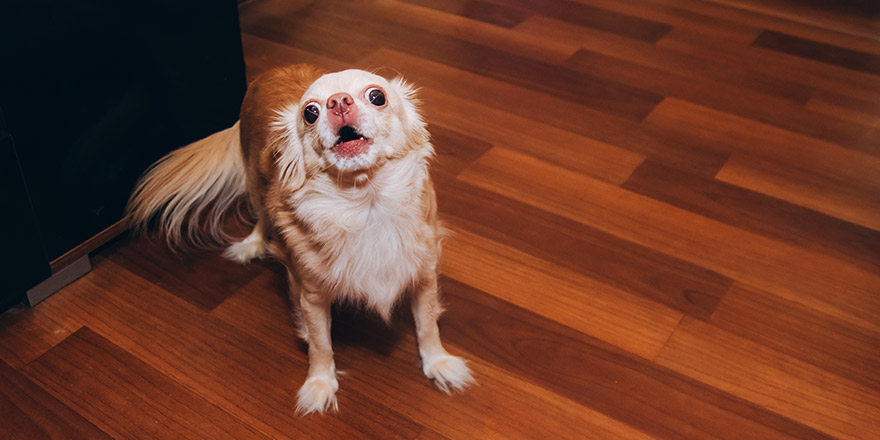 When your dog barks a lot, it can feel like you’re doing something wrong. Some dogs outgrow barking from the time they are a puppy to when they reach adulthood, but others need to be looked at by a professional to check that there isn’t anything wrong.

You’ll need to investigate your dog’s barking in stages to reach an understanding of it. Start by going to your dog when they start barking and look around. Is there anything that could be causing them to bark? Another animal or person? Have there been any recent changes in their environment since the barking started?

Dogs are very sensitive to their surroundings. Some dogs bark just because they aren’t happy that the furniture has been moved. Others will bark whenever they hear a knock on the door or someone walking toward the house.

There are so many reasons that dogs bark excessively, but what is the reason behind your dog’s behavior? This is something you will need to uncover.

If there’s no obvious reason that your dog is barking and you’ve made no changes to their environment, diet, or medical treatments already being received, it’s time to consider making a veterinary appointment.

Your vet will be able to help you uncover any medical reason behind your dog’s excessive barking. Your dog’s health does have the potential to affect their behavior, which means that your vet can make a diagnosis if needed. For some dogs, the issue may lie in their anxiety and stress, while others may just be attention-seeking.

How to Stop Excessive Barking in Dogs

Stopping your dog from barking a lot is a journey that you will both need to go on together. Avoid using contraptions like dog muzzles, because these devices can easily upset and stress out your dog. There’s no need to muzzle your dog just because they bark a lot. Dogs can be trained out of excessive barking by professional dog trainers and in the case of medical problems… Well, it’s hardly your dog’s fault that their health conditions cause them to bark more than other dogs.

Bark collars can be a better alternative. They don’t cover the dog’s mouth, won’t hurt them, and aren’t considered cruel or harmful to your dog’s health or mental state.

Shouting at your dog or using phrases like “shut up” isn’t going to stop your dog from barking. In fact, your dog will take the volume of your voice as an invitation to join in.

Instead of an aggressive response, be firm. Tell your dog to “be quiet” and look them in the eyes. Repeat the phrase to get their attention. Teaching your dog this command is an effective way of stopping them from barking so much. Wait until they stop barking, praise them for stopping, and give them a doggie treat.

Your dog will associate the word “quiet” with something positive, and you’ll see a reduction in unwanted behaviors like excessive barking.

Instead of using a verbal command, you can teach your dog a signal. Dogs often pick up signals faster than verbal commands, and your pup is almost always watching you to see what you’re doing and how they can get your attention.

Use a simple signal like putting your finger to your lips. This type of signal is unlikely to be confused for anything like you’re teaching your dog. Practice commands and signals when your dog is fully awake and happy. A happy dog will learn faster.

If you’re having trouble teaching your dog verbal commands or hand signals, reach out to a professional dog trainer.

When teaching at home fails, a professional dog trainer will be able to help you bond with your dog. It’s not a doggy daycare, you will be actively working alongside the dog trainer and your dog to reach new heights with your partnership.

You don’t have to choose a dog school if there isn’t one in your area. There are plenty of solo dog trainers who offer their services, some of which will even travel to you to make your dog more comfortable.

Understand that when dogs get tired, they stop barking as much. If you’re worried about your dog barking excessively when you’re not home, schedule time to play with them before you leave or hire a dog sitter to look in on your pup during the workday.

With dog sitters, you don’t have to hire them for an entire day or several hours. Some popular dog sitting services include having a dog sitter check on your dog for enough time to walk them and play with them (usually an hour or two at most), and that’s it. You can hire someone for longer to help stop dog barking behavior while you aren’t at home.

When you let your dog continue to bark for long periods of time, the behavior becomes a habit. Habits like this, the longer they are allowed to continue, become harder and harder to break. You could end up with an unruly dog that doesn’t listen to you anymore, instead of a dog that just has bad barking habits.

Barking gives dogs an adrenaline rush, which means that the feeling of barking in a calm environment will only make them feel good. They aren’t stressed out when they’re in a familiar environment unless there’s an environmental issue that is causing them to bark. If they are barking for the sake of barking, however, it’s more likely that they are giving in to the good feeling they get when they bark.

It’s not enough to just wait for your dog to get tired of barking. You need to take a proactive approach to reduce or stop them from barking all the time before they cause damage to their vocal cords. The other issue is that your neighbors probably aren’t fond of the noise either, and it’s more than likely that they’ll put in a noise complaint or even contact local pet organizations if they feel that you can’t look after your dog. To avoid this in built-up residential areas, we recommend talking to your neighbors.

Why is My Dog Barking Excessively? 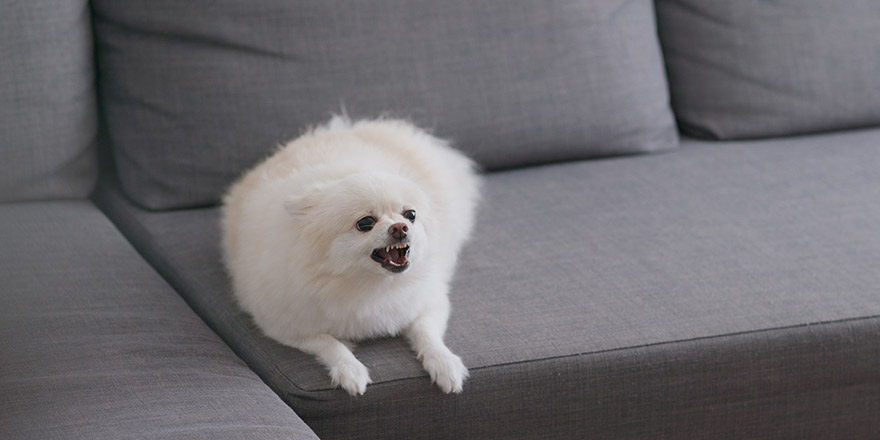 For separation anxiety, you may need to work with a professional to help your dog through their anxiety. Part of their therapy may mean bringing in another pup to use as a playmate for your dog while you aren’t home. Dogs are pack animals, after all, and most require attention throughout the day.

Territorial barking occurs when a dog feels like its property is being threatened by another dog or animal. You don’t have a hyper dog or an aggressive dog, you have a dog that is possessive and/or afraid of losing the things they “own”.

Your dog isn’t getting enough exercise. Dogs require mental stimulation to thrive every day. They are social animals and enjoy spending lots of time with each other and the rest of their pack. Burn off their excess energy by taking them on walks for long periods of time and playing games with them in your backyard.

A lonely dog will literally bark to get your attention. A bored dog who knows that you will react to its excess barking learns to bark to get what they want. If your dog is seemingly barking for no reason, it could be attention-seeking.

Some dogs become compulsive barkers because of anxiety and stress. Dogs with separation anxiety often give in to their barking needs, but they aren’t the only dogs that will bark like this. Some dogs learn their barking behaviors from their environments.

Some dog breeds are more prone to excessive barking than others. Toy dog breeds have a reputation for being “yappy”, such as Chihuahuas. If you would prefer to have a quieter dog breed, avoid Terriers, Beagles, and Pomeranians. A lethargic dog breed might be a better choice than a noisy dog, but you aren’t guaranteed to buy a puppy or adopt a dog that doesn’t have barking issues unless they’re disclosed by the owner or shelter.

They might, but there's no real way to tell without setting up some kind of in-home monitoring to see what your dog gets up to once you leave for the day. There are plenty of inexpensive options for indoor pet cameras, with many that link to apps on your phone so you can check in on your dog at any time. Some even let you talk to your dog through the app!

With cats that display unwanted behaviors, pet parents often employ the use of pheromones found in calming cat sprays and plug-ins. There are similar products available for dogs, which may be able to soothe your dog and stop them from barking so much when you aren't at home.

Why Doesn’t My Dog Bark

Dogs
Why Doesn’t My Dog Bark
Why Does My Dog Hate Puppies?

Dogs
Why Does My Dog Hate Puppies?
Why Do Dogs Eat Rabbit Poop?

Dogs
Why Do Dogs Lick Each Others Ears?
Why is My Dog Eating Rocks?

Dogs
Why is My Dog Eating Rocks?