Why Do Dogs Lick Each Others Ears?

By MyPetNeedsThat Staff
Last Updated December 27, 2021
Every product and service on My Pet Needs That is independently selected by our editors, contributors, and experts. If you purchase something through our links, we may earn a referral fee. Learn more

Pet owners who have noticed their dog’s tendency to lick other dogs’ ears may be wondering whether this is a healthy behavior or not. Though the act of dogs licking each other’s ears isn’t a negative behavior for most dogs to have, it can cause some issues which dog owners should look out for. Overall, it’s better to nip the behavior in the bud before it gets out of hand.

Why Your Dog Licks Other Dog’s Ears

Dogs are pack animals, just like many other canines out there in the world. When your dog goes to lick some other dog’s ear, you can consider it similar to a hug or handshake between humans. Dogs communicate in very physical ways. Ear licking is an extremely common and socially acceptable behavior – at least, in the world of dogs, it is. For humans, seeing your dogs lick ears of other dogs may seem a bit strange and unhygienic, but let us tell you more about this behavior so that you can understand it from your dog’s point of view.

In a pack, dogs lick each other’s ears to let them know that they’re there. It’s supposed to be a comforting way of announcing their presence. A dominant dog may display this behavior often, particularly if that dog has a more parental role in the pack. Dogs who are mothers, for example, will often lick the ears of a submissive dog (such as their puppies or a dog that they’ve claimed as their own).

Beyond saying hello and submitting a dog to more dominant behavior, dogs lick each other’s ears because dog’s ears are an area that they cannot reach by themselves. They can sometimes clean part of their ear using techniques that are more familiar to cats – licking a paw and using the paw to clean an area – but two dogs are going to have a much easier time grooming each other than trying to groom themselves.

A dog can tell that another dog needs their ears cleaned by using its nose to smell them. Dog ear wax has a particular scent. We may not notice it, but other dogs will and they’ll sniff at a dog’s ear before going in to clean it of any excess ear wax and/or dirt. It’s really the only way that a dog’s ears will get properly cleaned unless pet owners purchase an ear cleaning solution.

There’s one other… Kind of gross reason that dogs lick each others’ ears. Dogs love the taste of wax because it’s salty. They have no problem cleaning up another dog’s ear because they enjoy the taste of salt. This is common in pack life and throughout the canine world, even if we humans find it a bit off-putting. 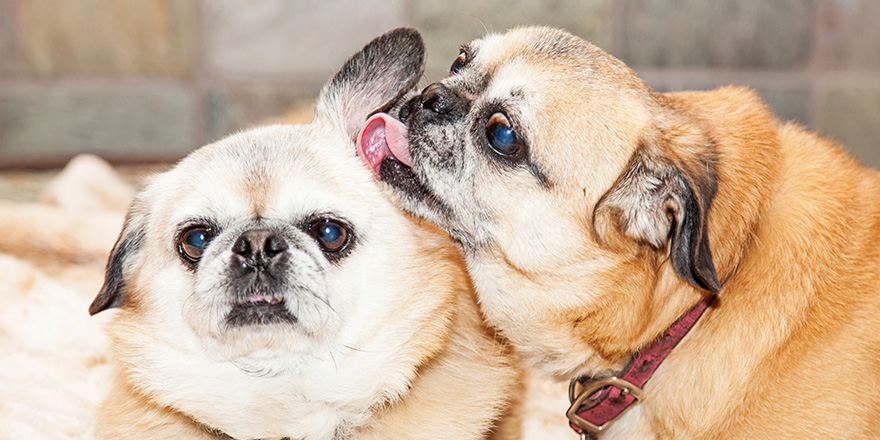 The Issue With Ear Licking

The major issue with ear licking in dogs is cleanliness. Funny that a technique dogs use to clean each other can actually result in the opposite, but they aren’t going to be aware of the possibility of an ear infection because of their actions. Too much licking can cause this, which then means your furry friend is going to need a trip to the vet for some veterinary guidance.

A dog’s mouth isn’t exactly the cleanest place in the world. When a dog bites a human, it’s advised that the human in question has the bite professionally cleaned at their nearest A&E as soon as possible. This is because there are so many harmful bacteria in a dog’s mouth that the human can quickly get an infection in the wound.

You don’t know what your dog has been licking before they go and lick other dogs’ ears. It wouldn’t be a reach to say that your dog could give another dog an ear infection without meaning to, even if they’re trying to clear away dirt and ear wax.

If you have more than one dog, it’s important to keep their ears clean so that they don’t accidentally give each other infections. Ear licking may be a common dog behavior, but it’s not a hygienic one.

It’s also possible that a dog has something like ear mites, which you don’t want your dog anywhere near less they become infected. As a dog owner, it’s your responsibility to keep your dogs healthy and clean. Where possible, keep them away from dog breeds that they don’t know and try not to leave your dog in a location with many dogs around. 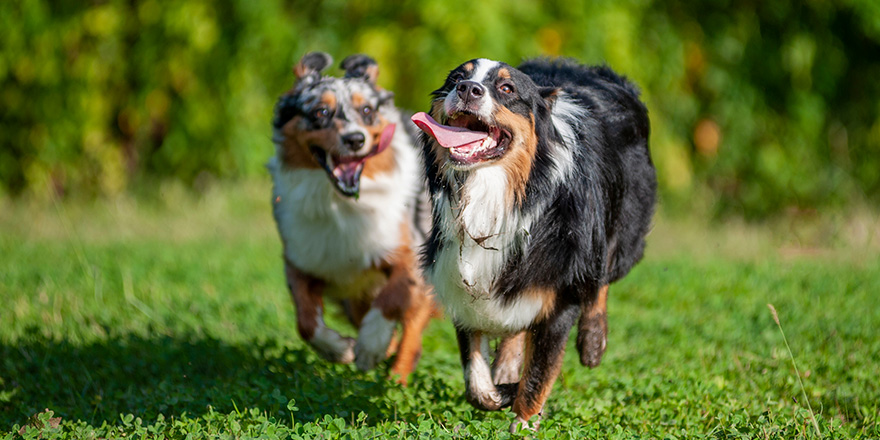 How to Stop Your Dog Licking Ears

Your dog’s body language is easy to read. You’ll know when they’re about to try licking another dog’s ears because they’ll get close to that dog, sniff at their ears, and then go to lick them. You’ll have a good amount of time during that to pull your dog away or get their attention to halt their actions. Occasional ear licking is safe, but obsessive licking behavior is what can cause things like ear infections in a more submissive dog who isn’t as likely to pull away.

Dog fact: Did you know that dogs used to get their ears cropped to fight infections? It doesn’t work and it’s a horrible practice.

To stop your dog’s licking, consider having your other dog’s ears cleaned out more regularly than you currently do. If the dogs in your household all have clean ears, none of them will smell any dirt or wax, so they won’t feel the need to clean each other. Here are some other techniques to curb excessive licking behaviors:

Interactive toys that would be great to use as a solution to this natural greeting would be those that your dog can chew on, lick, or have different smells. For an excessive licker, food-type toys are great distractions.

Dogs in the same family that share these bizarre behaviors should be checked out by a vet if one of the dogs is often subject to mutual grooming that seems aggressive. Your other canines could be smelling an infection, and your vet will provide veterinary advice and medication to handle this.

Dogs can smell a lot more than we can, so dog lovers should always be aware of changes in the behavior of their pups.

Why Do Dogs Smell Each Other’s Butts?

Dogs
Why Do Dogs Smell Each Other’s Butts?
Why Do Dogs Roll in Poop (and Other Smelly Things)

Dogs
Why Do Dogs Bury Things