By MyPetNeedsThat Staff
Last Updated March 15, 2022
Every product and service on My Pet Needs That is independently selected by our editors, contributors, and experts. If you purchase something through our links, we may earn a referral fee. Learn more

There are plenty of weird and wonderful things that we watch our dogs do as they grow up. One of the stranger ones is when we catch them eating rabbit feces. This behavior can be extremely worrying to dog owners because it’s not something that you see every day – unless you’ve had a dog and rabbit in the same household before. Here, we’ll talk about the questions that are on every dog and rabbit owner’s lips: Why do dogs eat rabbit poop and how do I stop them from doing it? 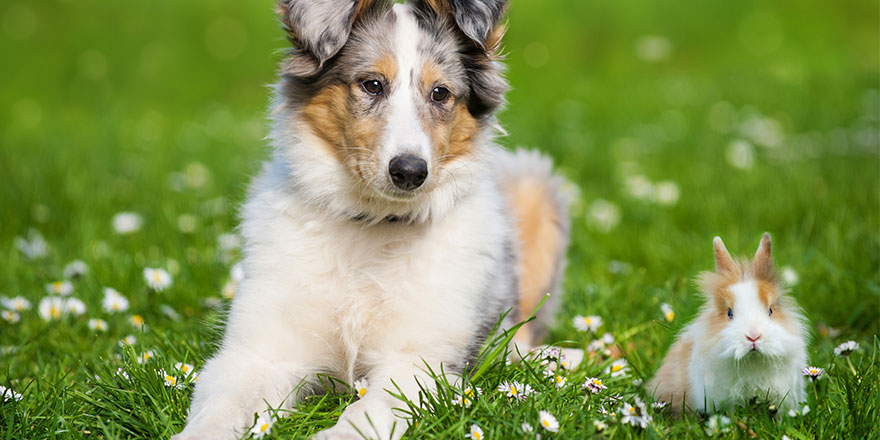 Dogs have a habit of munching on anything in their general direction. Most of this is down to curious behavior. Dogs use their mouths to explore the world, which means that they’re doing to lick, chew, and eat a lot of weird things during their lifetime. They’ll swallow things they aren’t supposed to, get into food that will make them sick, and yes, they’ll even spend some time eating rabbit droppings. What we want you to understand is that when a dog eats rabbit poo, it’s not inherently a bad thing. It shouldn’t cause any emergency situations that will have you rushing to the vets, even if it’s the rabbit poop of wild rabbits and not a domesticated one in your own backyard.

So, why do dogs eat rabbit poop?

You may find that a dog who decides to consume rabbit fecal pellets could have a nutritional deficiency. This is usually a deficiency in B-complex vitamins, but a quick blood test at your local veterinary practice will tell you why your dog’s stomach is craving the nutrients that they’re getting from the bathroom habits of rabbits.

Your pup could also need more fiber, which rabbit droppings are also rich in. That isn’t strange when you consider how much plant matter they eat every day.

The dangers of your dog eating rabbit poop are far and few between. Rabbit dropping, even those from wild rabbits, will seldom contain any harmful bacteria or substances. Rabbits mainly eat hay, grass, and vegetables, after all. Most of what rabbit feces is consists of digested and undigested food, whether they are producing pellet droppings or soft rabbit droppings.

The thing that dog owners have to realize is that their dog has still taken the time to eat rabbit poo. Feces, no matter how much of it is organic matter from grass and hay, can still be a breeding ground for bacteria and other microscopic pathogens. This is because other organisms may use the rabbit feces as a food source, and may spread their own bacteria around the area where the rabbit poop is.

If anything in rabbit droppings is likely to may your dog sick, it’s going to be the bacteria on and in it. That said, the majority of parasites and pathogens in rabbit poop cannot infect your dog.

Are There Parasites in Rabbit Poop?

There are parasites in rabbit droppings. Some, like tapeworm and roundworm, can be harmful but unless your rabbit is infected already, they won’t be passing any of these parasites onto your pup.

Dogs who spend some time eating rabbit feces often end up excreting a parasite called coccidia. Coccidia organisms won’t harm your dog, they just pass right through their system without making any drama.

The time to worry is when your dog is throwing up or is having bouts of diarrhea after consuming rabbit droppings. Vomiting and diarrhea are signs of infection, but it’s impossible to tell what has caused the symptoms unless your pup has been checked over by a vet, who will ask about your dog’s recent activities.

Other actions that can cause vomiting and diarrhea in dogs include food poisoning, eating food they’re allergic or intolerant to, eating harmful food or substances, or even a simple change in diet that isn’t agreeing with them.

The Difference Between Rabbit Feces

The first type of rabbit feces is round pellet-like balls that your rabbit will produce hundreds of every week. In fact, rabbits produce approximately 400 of these spherical, dark brown poops every day. This is the type of poop that is mostly made up of the plant material that your rabbit has digested. If you break one open, you’ll see that they seem to be hay-based.

The second type is a dropping called cecotropes. These are produced in the large intestine, and they are comprised of partially digested food. A rabbit who doesn’t have enough nutrition in its diet will produce more of these kinds of poops because they eat them. Appearance-wise, they look like a mound of smushed together droppings and are soft, rather than hard like the pellet ones.

Your dog won’t get any sicker from one type of rabbit poop over the other. The two types just have different functions for your rabbit.

In the first instance, we want you to remain calm. Plenty of dogs eat rabbit droppings and they end up completely fine, even after worrying their owners a whole bunch.

Watch over your dog for the rest of the day and check for:

When to Take Your Dog to the Vet

If you notice any of the symptoms we listed above, contact your vet for an emergency appointment and get them seen as quickly as possible. The next day isn’t good enough here, you need a same-day appointment. You may be given the number for an emergency vet, or your own vet may advise you on what to do.

If you decide not to take your dog to the vet that evening and they get worse over the next day or two, an emergency vet appointment is crucial. 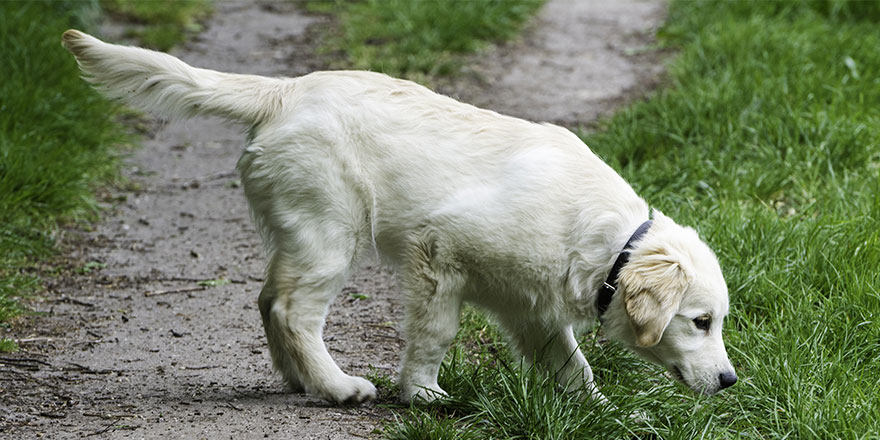 How to Stop a Dog from Eating Rabbit Poop?

There are several techniques you can use to stop or prevent your dog from eating rabbit poop.

Of these, the quickest way to stop your dog from eating rabbit fecal pellets or soft feces is to section off part of your garden for your pet rabbits to use alone. Having your rabbits free-running in the same space as your dog has a lot of negative potentials anyway, so buying an outdoor playpen or building a run will make everything much safer.

If your dog has a sensitive stomach, they are more likely to get sick from your rabbit’s poop. Keeping them separated with a pen or some chicken wire will ensure your dog learns what they can or can’t eat outside.

Other Dangers From Rabbits to Dogs

Though the waste made in your rabbit’s system may not harm your dog, there are other things that the owner of a rabbit and a dog should be aware of.

Rabbits often have fleas and ticks. The majority of domestic rabbits live outdoors, which means that they are prone to be infested by these organisms. Even if you don’t have a rabbit, wild animals can pass these bugs onto your pup just by being in the same vicinity.

The last thing any dog owner wants is for their dogs to be infested with fleas. They are extremely difficult to get rid of, particularly if you aren’t aware of them and they have time to spread in your home. Infected fleas are even worse because they can spread tapeworms and other diseases. Be sure to keep your dog up-to-date with all of their flea and tick treatments, and stay on top of their yearly check-ups and vaccination boosters.

Unfortunately, yes. As humans, we find this behavior in dogs utterly disgusting and we're never quite ready to deal with it. Around 24% of dogs eat poop, with some having a genetic predisposition to the act. Dogs may eat rabbit poop, cat poop, or even go at their own feces.

Your dog has the potential to get sick from eating rabbit poop, but it's unlikely. If you own the rabbit in question and they are otherwise healthy and have no diseases, your dog shouldn't suffer from eating the partially-digested food from your rabbit's stomach that they've turned into feces. The concern should come when your dogs are eating the poop of a wild rabbit or anything that has been around dead rabbits. If you're worried, always contact your vet who can give you professional advice, and book your dog in for a check-up if they think that they need one.

Coprophagia, which is the eating of feces or dung, is the proper term to use when referring to a dog or another animal that is eating poop. This action is extremely common in some species, such as in rabbits, who eat their own poop when they aren't getting enough food or nutrition in their daily diet. There are a range of animals that eat feces, so your dog isn't alone in their actions.

Why Do Dogs Eat Poop and How to Stop It

Dogs
Secrets to Housebreaking Adult Dogs
Why Does My Dog Eat Paper?

Dogs
Why Does My Dog Eat Paper?
My Dog Has Eaten A Sock: What Shall I Do?

Dogs
My Dog Has Eaten A Sock: What Shall I Do?
What Can Dogs Eat? A List of Fruits and Vegetables Dogs Can or Can’t Eat

Dogs
What Can Dogs Eat? A List of Fruits and Vegetables Dogs Can or Can’t Eat