Why Do Cats Sleep So Much? The Explanation Behind Your Napping Feline Friend

By Melissa Chatterton
Last Updated October 18, 2022
Every product and service on My Pet Needs That is independently selected by our editors, contributors, and experts. If you purchase something through our links, we may earn a referral fee. Learn more

When dealing with adult cats, you know how difficult it is to get some shut-eye when they’re active in the early morning and late at night. Cats love to be awake during these later and darker times of the day because of habits ingrained into their species. Many new cat owners wonder, “are cats nocturnal?” when they are actually crepuscular animals active at dawn and dusk. So, if you’re wondering why your cat always seems to be asleep during the day and want to know if their habits are healthy for them to have, keep reading to have all your kitty sleep questions answered.

Why Do Cats Sleep so Much?

There are a number of reasons behind cats sleeping for large portions of the day. Many cat owners don’t know that cats have very different sleeping patterns from humans. They have retained a lot of the habits of their wild ancestors, including the need to hunt at certain times of day when it’s cooler and safer, and they’re more likely to find their preferred prey.

You’ll rarely find your cat in a deep sleep, but it’s not impossible. Cats tend to have a kind of dozing deep sleep pattern rather than dropping into hours of deep sleep every night like humans. Your domesticated cats will take cat naps throughout the day to regain energy and be more active during twilight hours.

What does this mean for your cat’s sleeping pattern? It means your cat wakes up later in the day and will be more active between dusk and dawn. Have you ever noticed your cats sleeping while doing housework or working? That’s typical cat behavior for domesticated cats of any breed. Older cats will, however, sleep more than other house cats.

The Difference Between Nocturnal and Crepuscular 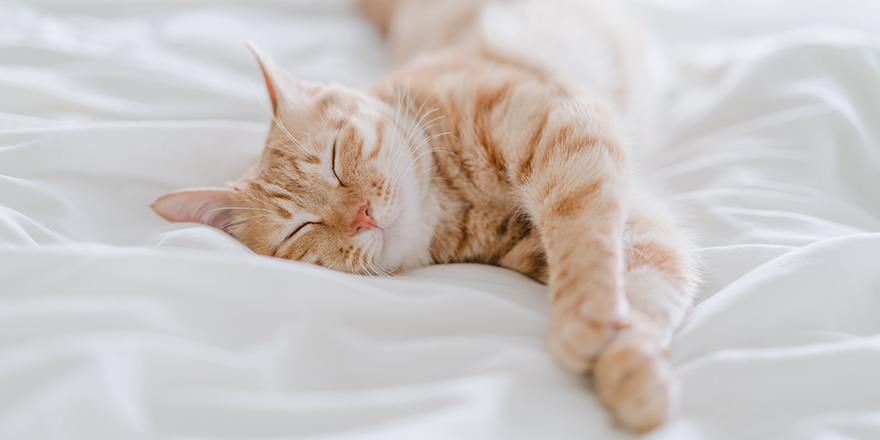 A nocturnal animal, such as an owl, will only be active at night. They sleep during the day and are active when it’s dark so that they can hunt certain types of prey. But the other reason that owls are night hunters is that their body’s build is better suited for staying active at night. They have evolved with certain traits to adapt to that time of day, while other birds are day hunters and will sleep at night.

Cats are an interesting case. Over the many years of evolution that feline species have gone through, they’ve come out with eyes that are perfect for use in low-light conditions. Their bodies have adapted to hunting during twilight hours, and their eyesight works at its best. Additionally, they are extremely stealthy creatures, so catching prey who use twilight hours to run around is much easier.

To summarise this section: Nocturnal animals are night hunters with bodies better built for being incredibly silent and feeding on other late-night animals, while crepuscular animals (like cats) are better adapted to low-light conditions rather than full darkness.

Your cat is likely to exert a lot of their energy during the twilight hours, so it’s good to be a cat owner who isn’t a light sleeper or is also active at night so that your cats don’t disturb your sleep much. Kittens won’t completely follow crepuscular habits, but they’ll quickly show signs of them once they are awake more often.

How Much Do Cats Sleep a Day? 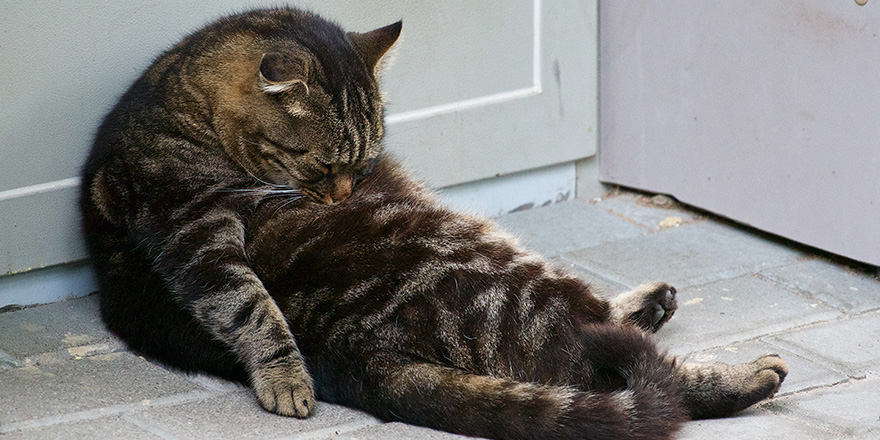 You can expect a house cat to sleep between 12 and 16 hours in a single day. That’s the average, but they may sleep more or less than that. If you’re wondering how much sleep is healthy for your cat, don’t compare them to other species or even your own sleeping pattern. If you feel like your cat is sleeping too much or is lethargic and hard to wake up, seek veterinarian advice. Particularly if they can’t stay awake or won’t wake up.

Why is My Cat Sleeping so Much?

Your cat is having a long cat nap because it’s normal for them to do so. They will wake for food or may switch positions now and then, but cats don’t really “come alive” until the evening. This makes them an excellent companion for people who work nights or from home, but it also means that anyone in a standard 9 to 5 job doesn’t need to feel bad about leaving their kitties at home all day. Trust us, they mostly sleep and will only wake up to eat, use the bathroom, or if something startles them.

Why is My Cat Sleeping More Than Usual? 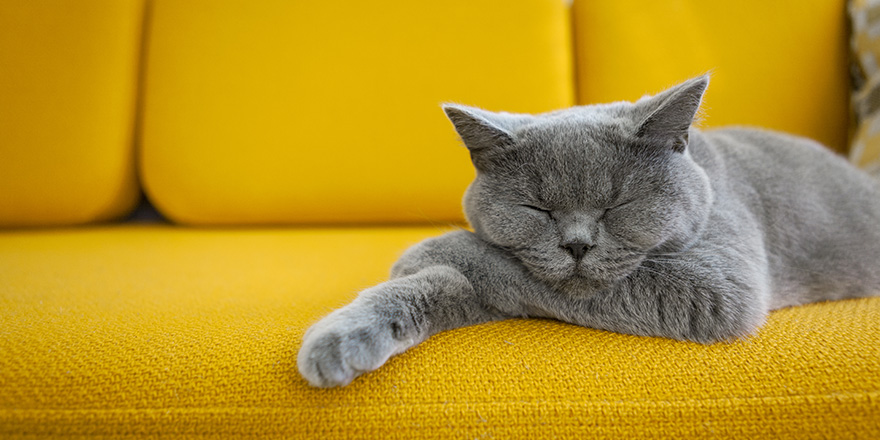 When you feel that your cat may be sleeping more than usual, it’s important to monitor their sleeping schedule and daily routine.

Older cats sleep more often than younger cats, but they will still have several hours of activity each day.

It’s hard to say this, but if your cat is very old and spends a lot of their time asleep or laying around, they may be near the end of their life. Cats live an average of 12 to 18 years, depending on their breed.

If your cat is otherwise healthy but seems to be sleeping far too much, an underlying medical issue could go untreated.

Does a Medical Issue Cause Your Cat’s Sleeping Habits?

Lethargy indicates something else going on inside your cat’s body that needs to be checked out.

Any of these symptoms should be a cause for concern that leads you to book a health check-up with your cat’s veterinarian:

All of these symptoms are connected to lethargy. Although there may be nothing serious going on, having your cat checked out would be better if a more critical illness, injury, or medical condition causes your cat to sleep more than they used to.

What to Do if Your Cat Won’t Wake Up

If you’re struggling to wake your cat up, there are several steps you can take before the situation becomes a bit more serious:

Remember to check your cat’s breathing when attempting to wake them. You can do this by putting your finger under their nose or resting your hand on their side. If you can’t feel any breath and their chest isn’t rising, perform cat CPR if you know how to, or immediately drive to your nearest veterinarian practice with your pet.

As long as your kitty is only sleeping all day and not all night as well, this is very normal for a cat. Cats prefer to sleep during the day because they hunt when it's colder in the wild. It's a habit passed on through generations of felines and isn't anything to worry about unless your cat is sleeping much more than normal or you can't wake them up.

To conserve energy, older cats will often sleep much more than younger cats. You can always tell when a cat is getting on in years because they'll spend less time playing and a lot more time sleeping or just laying down. An older cat naps through the majority of the day and will enjoy a comfortable lifestyle until they reach the end of their life.

Yes, indoor cats do sleep more than outdoor cats and there is a reason for it. It's laziness and lack of stress. Outdoor cats spend their time hunting, fighting with other cats, looking for mates, exploring, and finding safe spaces to sleep that isn't in another cat's territory. Because of all these daily tasks, an outdoor cat will sleep less and be much more aware of their surroundings than your indoor cat.

Caring for Outdoor Cats: How to Keep Them Safe, Happy, and Healthy

Cats
Caring for Outdoor Cats: How to Keep Them Safe, Happy, and Healthy
To Let Them Roam or Stay at Home – Indoor Cats vs Outdoor Cats

Cats
To Let Them Roam or Stay at Home – Indoor Cats vs Outdoor Cats
Allergies In Cats: Information, Causes, And Treatments

Cats
Allergies In Cats: Information, Causes, And Treatments
Worried About Nasty Parasites? Here’s Our Guide to Deworming Your Cat

Cats
Worried About Nasty Parasites? Here’s Our Guide to Deworming Your Cat
Are Cats Carnivores or Omnivores?

Cats
Are Cats Carnivores or Omnivores?
Cat Panting? Reasons for Feline Heavy Breathing and How to Treat It

Cats
Cat Panting? Reasons for Feline Heavy Breathing and How to Treat It