Everything To Know About The Most Popular Spitz Breeds Dogs

By MyPetNeedsThat Staff
Last Updated April 26, 2022
Every product and service on My Pet Needs That is independently selected by our editors, contributors, and experts. If you purchase something through our links, we may earn a referral fee. Learn more

Most Spitz breeds have been around for hundreds, sometimes thousands, of years and have an incredible story to tell. Today, there are over 50 breeds of Spitz dogs, all with unique and endearing traits.

If you’re curious to learn more about Spitz dogs, take a look at the following article where we have included interesting facts and information about some of the most popular and spectacular Spitz breeds including Pomeranians, Shiba Inus, Siberian Huskies, and many more.

What is a Spitz Dog?

The term Spitz can refer to particular dog breeds that may share physical attributes, personality traits, and heritage. Spitz-type dogs are breeds that are better equipped to deal with colder climates due to their thick coats and hard-working nature.

To this day, the American Kennel Club acknowledges 16 spitz dog breeds as they are synonymous with the general breed classification. However, it’s estimated that over 50 breeds of Spitz-type dogs are known and they all vary in shape and size. 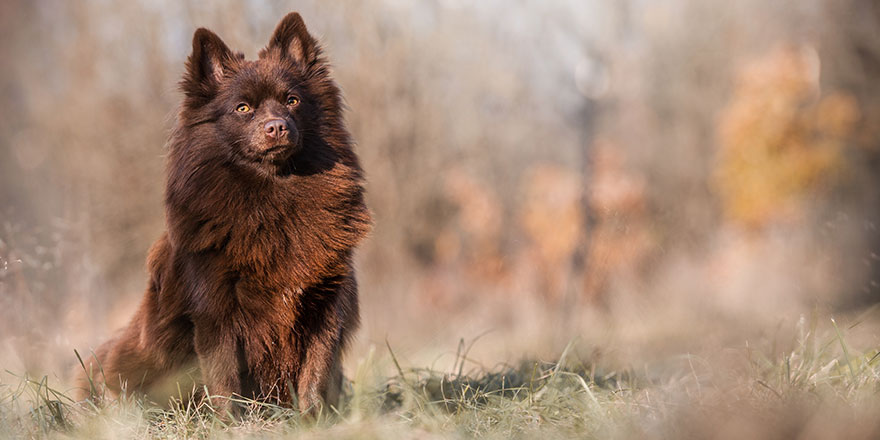 Many Spitz breeds will have a similar wolf-like appearance or simple traits that unite them among other Spitz dogs. Generally, these dogs will have incredibly fluffy double-coats with pointed ears and noses. Tails are a different matter as some tend to be long that hang straight down whereas others have a curled tail that directs upwards.

Since most types of Spitz have a double-coat, it’s likely that they will shed significantly compared to other dog breeds. If you’re considering a Spitz breed, you’ll have to make sure you brush and groom them regularly to keep the coat healthy and your home fur-free.

Spitz dogs tend to share some common personality traits. A lot of sources state that Spitz’s are intelligent dogs and are highly curious and sociable. However, these beautiful dog breeds don’t come without some drawbacks. A lot of Spitz dogs are also known to be stubborn and will require obedience training from an early age.

If you’re considering one of these breeds it’s important to take into account the additional patience you will need when training and raising a Spitz puppy. Most Spitz breeds are very intelligent and, because of their working-dog heritage, they tend to be very active and will therefore need a lot of mental and physical stimulation.

Having said that, these traits are generalizations and individual dogs will sometimes have their own personalities that may stray away from the typical attributes. So if you’re looking for a new best fur friend and a particular breed has caught your eye, make sure you do your research first so that you can guarantee they are the right dog for you.

Where do Spitz Dogs Originate from?

These dogs originated from various places such as Russia, Asia, North America, and Scandinavia. As you can probably tell by their coat types, they were typically built to endure colder climates.

The majority of Spitz breeds were bred as working dogs. These jobs included pulling sleds, herding reindeer, hunting game such as rodents and wild boar, and even guarding settlements against large predators such as bears. In addition to this, many smaller Spitz breeds, such as the Schipperke and the Keeshond, were known as barge dogs as they were very valued companions that would accompany their owners when sailing.

So without further ado, here is a list of the most popular and common types of Spitz dog breeds. Along with their general personalities and appearance, you can also find a few extra details about their size and life span (just in case you were thinking of getting yourself a new family friend). 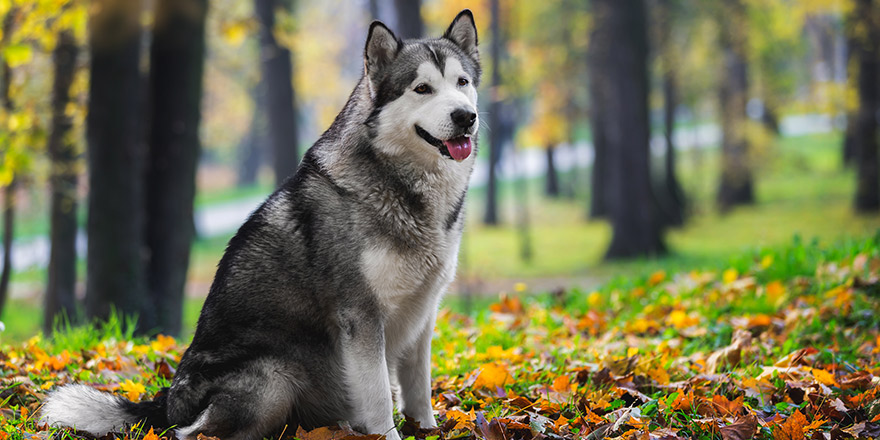 Alaskan Malamutes are incredibly strong and durable. With this in mind, it would make perfect sense to learn that these pooches were originally bred to be sled dogs.

An Alaskan Malamute has a dense coat, curly tail, sharp-tip ears, and powerful build, complete with friendly, almond-shaped eyes. They may be disciplined, working dogs when fully grown but they can also be incredibly loyal and affectionate companions. 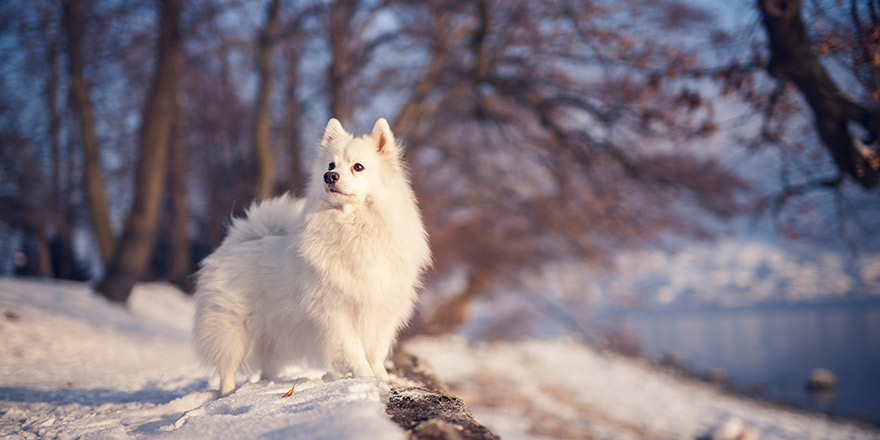 These dogs are incredibly clever and agile and are also known for their beautiful white fur, black noses and lips, plumed tails, and sharp minds. American Eskimo dogs love spending time with their family, whether that’s curling up in the evening or playing with children after school. Thanks to their intelligence they are also highly trainable dogs.

According to the AKC, there are three recognized sizes of the American Eskimo dog: toy, miniature, and standard. The measurements of each variation can be found below if you’re interested in noting the differences. 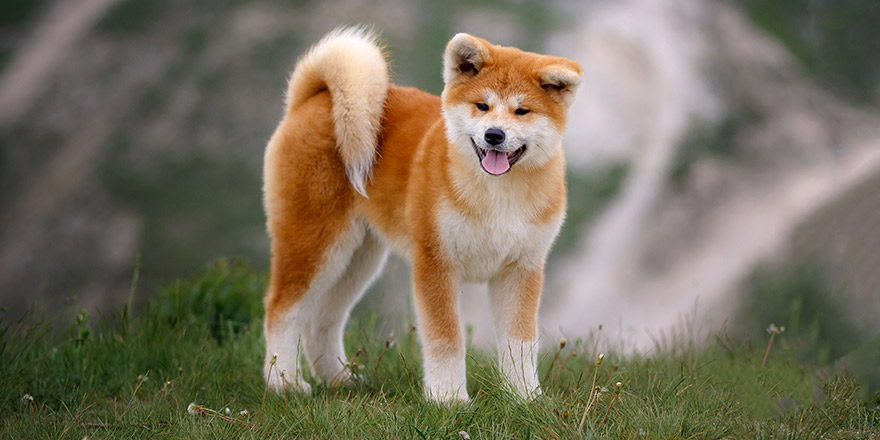 Originated from Japan, the Akita is regarded as a symbol of good health and long life. They are incredibly powerful and fearless showing unwavering loyalty to their owners. However, they may not be as friendly toward strangers and other pets so socialization is recommended from an early age.

The Akita was bred to hunt game and also fish so they are highly regarded as astute dogs that can be trained well. Having said that, the Akita is a dominant dog, so training must be frequent and firm with plenty of positive reinforcement.

If you want to learn all about these loyal dogs, take a look at our breed guide available here. 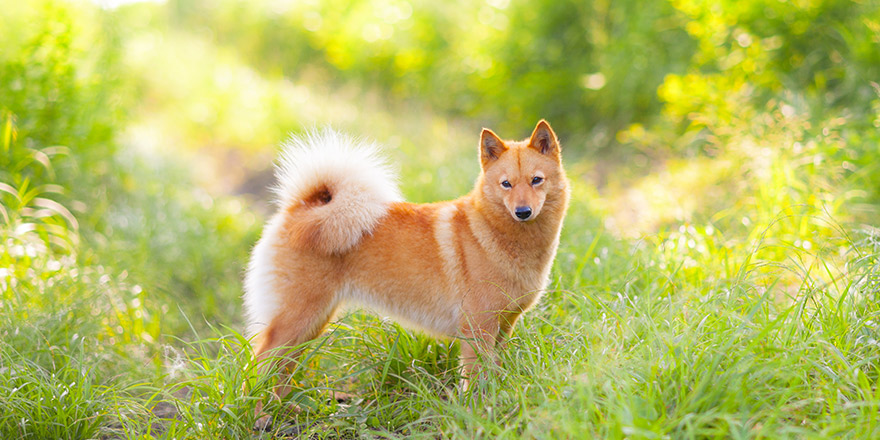 Finnish Spitz dogs are lively working canines with fox-like faces, small frames, and pointy ears. Typically these pooches can have eye-catching red, gold, or reddish-gold coat colors which makes them stand out amongst other Spitz dogs.

The Finnish Spitz was bred for hunting and was particularly talented at hunting grouse which eventually lead to their nickname the ‘barking bird dog’. This is mostly because these dogs were effective at alerting their owners using a range of vocalizations including yodeling. To this day, although they can be very vocal pups, Finkies are known as incredibly friendly and energetic and make great family dogs. 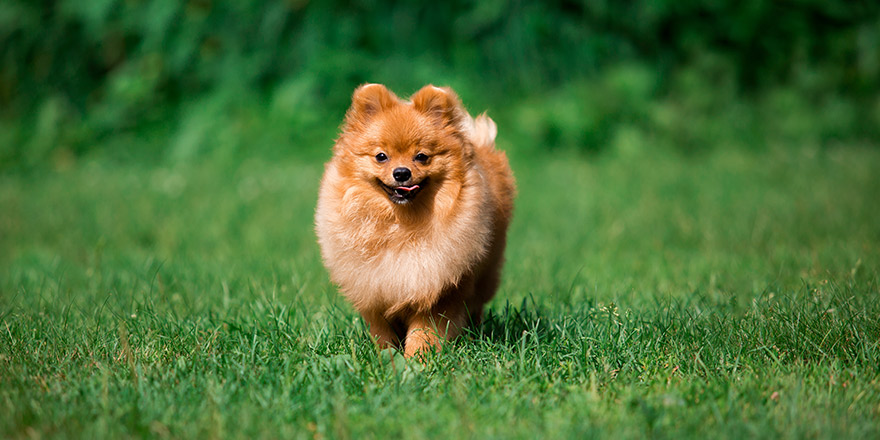 A significant fact about the German Spitz is that they are very easy to train compared to other dogs as they are typically eager to please. They may not be known as the most affectionate dogs but their devotion and loyalty toward their owners are almost unmatched. Due to this, they are generally very watchful of strangers making them great alert/guard dogs.

The German Spitz breed has a fox-like head with a plushy, thick coat and bushy tail. Depending on the size of the breed (listed below) you can find these dogs in an array of coat colors including brown, black, orange, cream, white, and many more. 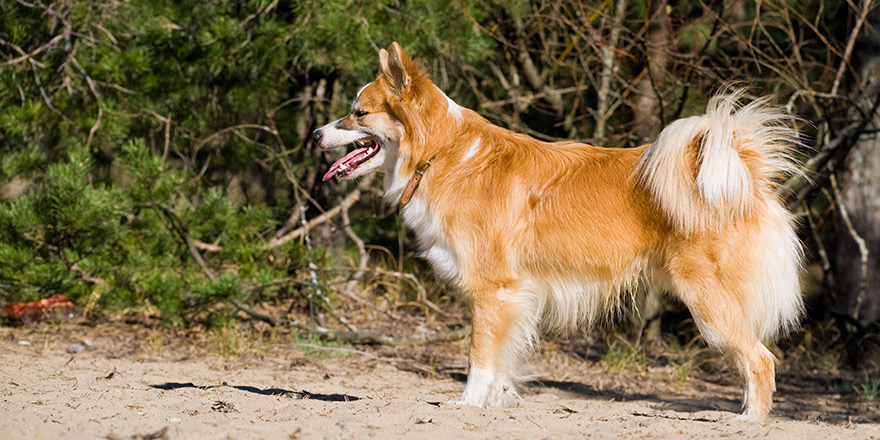 A lot can be said about these beautiful, clever, and active dogs. You may find it interesting to know that they are the only native dog breed to Iceland. Originally a herding dog, the Icelandic Sheepdog is a worthy companion in any home in the modern-day. These Spitz dogs are immensely loyal, easy to train, and adore spending time with their families.

Like other Spitz breeds, the Icelandic Sheepdog was made for cold environments and would spend a considerable amount of time outdoors to herd reindeer, meaning they have a thick coat that will need grooming regularly. However, whereas their coat may require a lot of attention, they don’t tend to shed excessively. 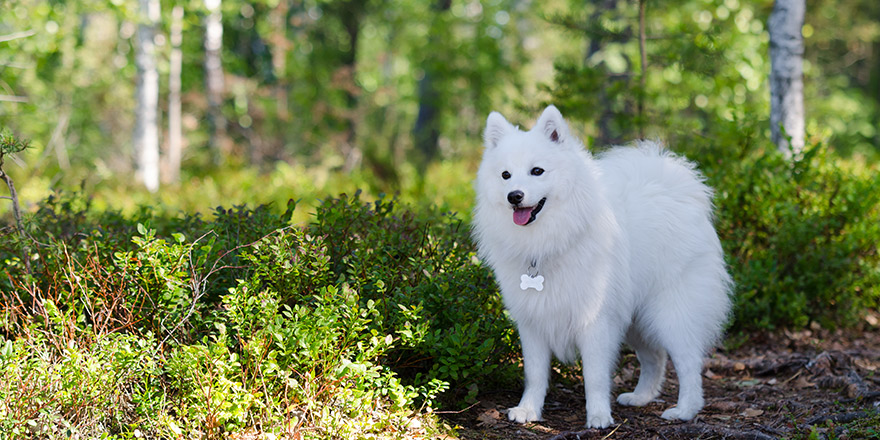 The Japanese Spitz is an incredibly clever and funny dog with a particular fondness for children. These little dogs are very active and love to play and because of their high intelligence, they can be easy to train. Whereas some pet parents claim that their Japanese Spitz is friendly and open toward strangers, they are often regarded as very watchful in nature.

All AKC recognized Japanese Spitz’s will have a white coat with no possibility of markings or other colorations. They tend to have a medium-length coat with a tendency to shed and will need regular grooming. 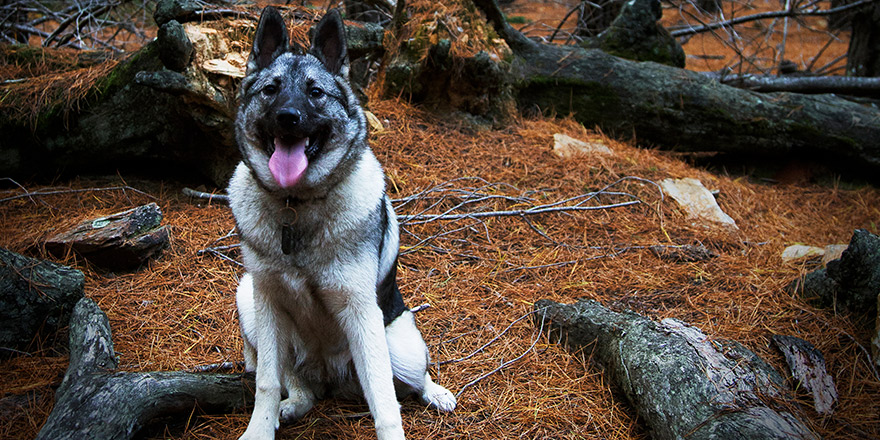 The Norwegian Spitz dog breed is known for herding sheep and guarding farms, and before that, helping Vikings hunt. Physically, these dogs have a faint fox-like face coupled with a short study body and thick coat that can easily withstand harsh winter weather. 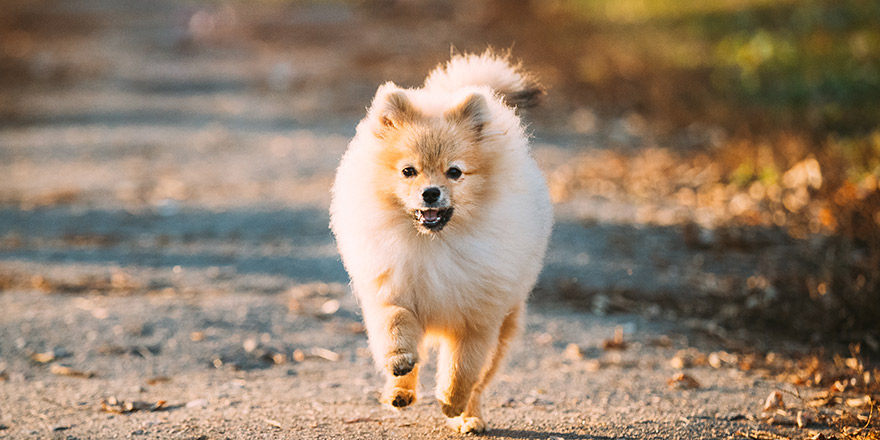 Pretty much everyone is familiar with these tiny, high-energy dogs but not everyone is aware that they reside in the Spitz family of breeds. Despite being a small dog, the Pomeranian has a big personality and will remind you so with his excessive vocal tendencies. However, that doesn’t mean to say that they won’t make good family dogs. In fact, the Pom is eager to please and will take to training well due to their high intelligence. In addition, they love children and will leap at the opportunity to play and run around with their small humans.

Although Poms are small dogs (typically weighing less than seven pounds), they retain the thick, double-coat of their ancestors that will require regular grooming. Having said that, compared to other breeds featured here, the Pomeranian doesn’t shed as much.

If you want to read more about the Pomeranian breed, take a look at our full breed specification breakdown here. 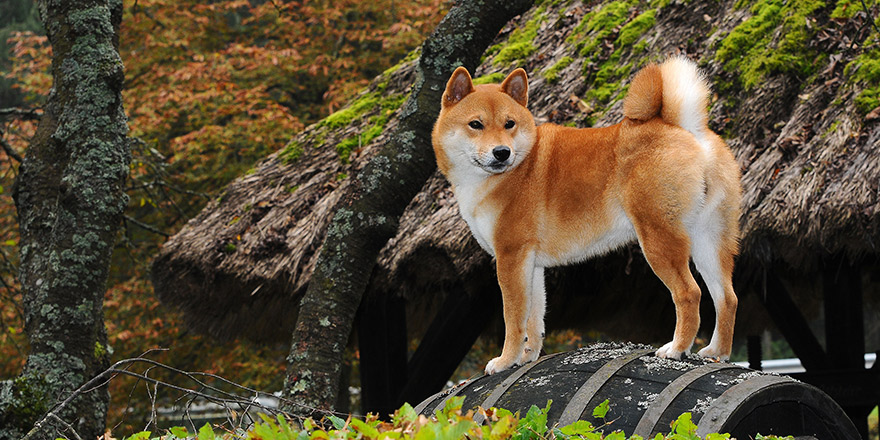 The Shiba Inu is a well-known, well-loved Japanese breed that was only recently introduced to the US around 60 years ago. Shiba Inus are regarded as muscular, good-natured, and confident dogs so their growing popularity makes perfect sense. To add, despite their confident and attentive nature they are also loving family dogs.

Shiba Inus can make excellent companions but may need socialization from an early age to help them effectively socialize with other dogs and sometimes children. They may also be considered a high-maintenance dog breed as their mental stimulation needs are higher than other canines. However, this can be combated well with frequent trips to the dog park, interactive dog toys, or even enrollment in dog sports.

Take a look at our Shiba Inu breed specification here to learn everything there is about this Spitz dog breed. 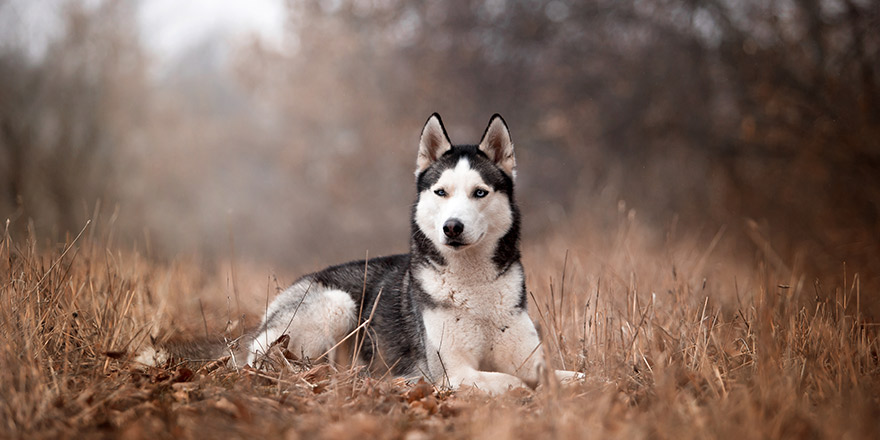 Raising one of these former sled dogs can be a challenge but it can also be a rewarding one as they are loyal and loving in nature. Not to mention, they are also tremendously entertaining.

Curious to learn more about the Siberian Husky? Take a look at our breed breakdown here. 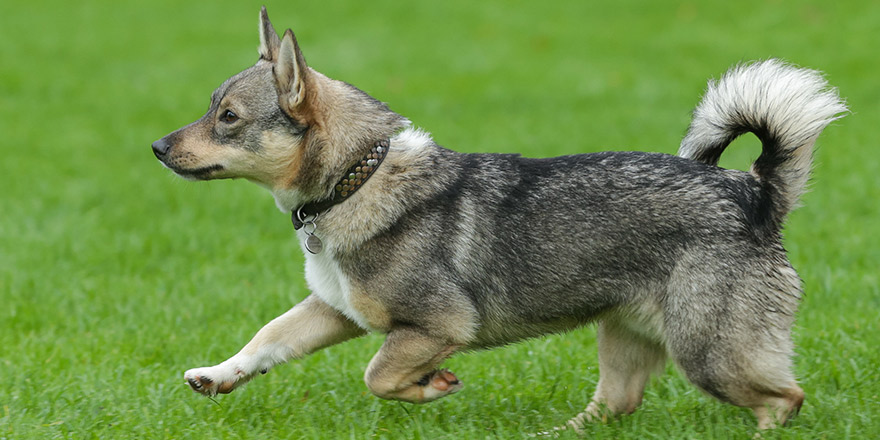 Swedish Vallhunds are another breed that is rumored to have assisted Vikings and are mostly used to herd cattle. It is speculated that this Spitz came from the breeding of the Scandinavian Spitz dog and the Welsh Corgi which would explain its heritage and its small legs and long body.

The Swedish Vallhund is another energetic breed that will require lots of activities to keep it busy when its pet parents are not home. According to many sources, including Swedish Vallhund lovers, they are excellent family pets. They not only dote on the company of their family but also watch over them loyally.

As mentioned previously, there are over 50 – 60 breeds of Spitz-type dogs. Below, we have listed a few more that are recognized by the AKC: 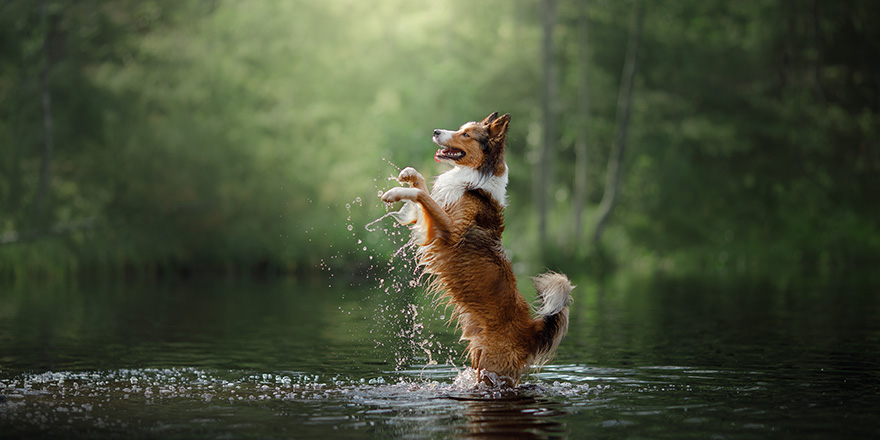 Dogs
Go Fluff Crazy With Our Guide to 20 of the Best Fluffy Dog Breeds
Brindle Dog Breeds: Top 22 Most Popular