By MyPetNeedsThat Staff
Last Updated March 10, 2022
Every product and service on My Pet Needs That is independently selected by our editors, contributors, and experts. If you purchase something through our links, we may earn a referral fee. Learn more

Puppy fear stages can be very concerning for dog owners to witness. New puppy owners may not be aware of what their dog is going through, which means that this critical period is sometimes overlooked. During the developmental stages where your puppy’s brain is changing, they can be so easily triggered by the world around them. Single event learning, that being the things your puppy learns from one frightening event, can have a huge impact on their future behaviors.

What are Fear Periods in Dogs?

Fear periods of windows of time during your puppy’s life that will show sudden changes in their behavior. The reason this happens is that your dog’s brain is developing, which leaves them feeling suspicious towards things they aren’t used to and scared of things they used to be fine with. Their brain is constantly on the edge of a cliff, and when something sets them off, the outcome can be scary for both the dog and the owner.

Although these fear behaviors sound like an awful part of puppy development, they are necessary. They serve a functional purpose, which will allow your dog to grow more independent as they get ready to enter the next stage in their life. Strangely enough, the fear helps a dog build confidence in themselves and can help them recognize objects and people that they find questionable.

It’s vital, during these fear periods in dogs, that the dogs are able to find safety in their daily routine and their surroundings. When a fear period occurs, you can’t do anything but let it run its course, but that doesn’t mean you can’t help your dog feel more at ease. 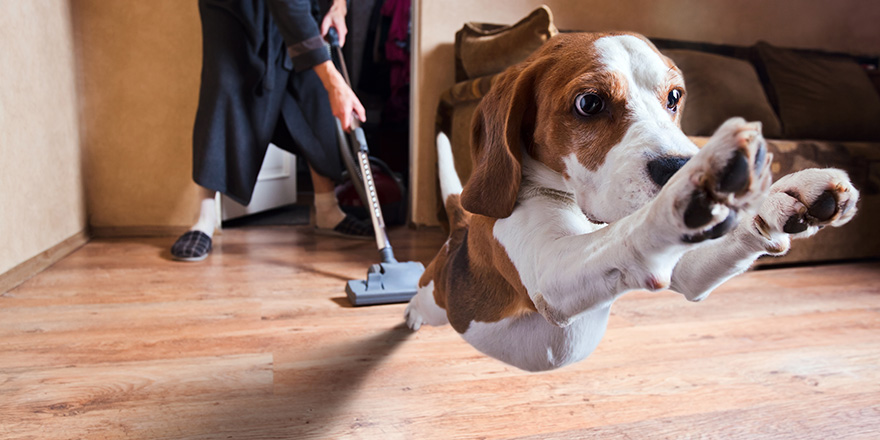 What is a Fight, Flight, and Freeze Response?

The fight and flight instinct are both very well-known in human society and occur during times of high stress. The body undergoes an overwhelming feeling of pressure and fear that it switches into either of these modes to help you survive.

In more recent years, we’ve also started to hear more about the freeze response. No one of these instincts is any weaker or stronger than the other, it’s simply how your body is hoping to help you survive an event that has stressed you out. It’s the same for dogs and many other animals. Any single, scary event can trigger fight, flight, or freeze responses.

When you witness your dog displaying fearful behavior, they will choose one of these three instincts to lead them out of it. A more pronounced fear period can cause further issues and may require veterinarian visits for advice.

A fearful puppy or adult dog who enters fight mode will become aggressive. In their mind, the only way to escape the situation that has scared them is to battle their way out. They will attempt to become the scarier thing in the room, often by growling, barking, and changing their body language to appear more threatening.

It doesn’t only take an extremely sensitive dog to move towards their flight instinct over their fight instinct. In some situations that require your pup to figure out an escape, they may decide that actually escaping is their best plan. A dog in flight mode will run away and often hide until they feel it is safe to reappear again.

Freezing is the newer of these instincts, but it’s in no way lesser than fight or flight. When a body freezes, it is because the stress and fear have overwhelmed it to a point where it physically cannot move. The person or animal’s mind may dissociate, too, or they may be mentally present. One thing is for sure, they won’t be moving. It’s a terrifying instinct because your dog will lose control over their own body for a time, which can add to the fear they’re feeling.

When Do Fear Stages in Dogs Occur?

During the first year of your puppy’s life, they will experience one or two fear periods. They’re somewhat unpredictable, but knowing when a fear period coincides with a certain time in a puppy’s life can help you be prepared during those weeks.

The first puppy fear stage happens between 8 and 11 weeks of age, while the second can be anytime between the 6th and 14th months of their life. 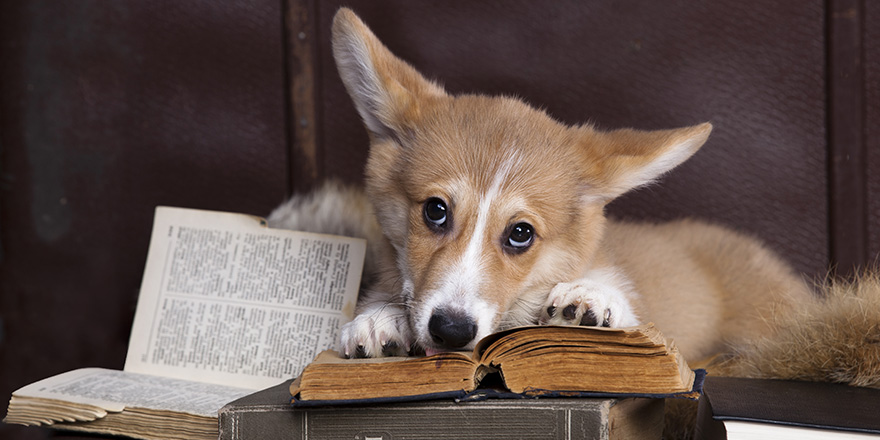 For puppies, the first fear period will take place before they are 3 months old if it’s going to happen at all. It will last between 2 and 3 weeks at some point after the puppy is 8 weeks old but before their 12th week.

It’s an unfortunate time in a dog’s life to have a fear period because it’s the exact window where puppies are usually separated from their littermates and their mother. Early socialization can help with some of the fear, but part of the reason that dogs are so scared when they first enter a new home is because of this first period of fear.

As their owner, you should endeavor to give your puppy as many positive associations with their surroundings as you can. From your puppy’s perspective, they’ve gone from a safe environment with other dogs from their litter to a strange, new home where they are completely unfamiliar with everything and everyone. And as if that wasn’t enough, their brain is telling them to be scared of everything.

This fear period will be a defining event for your little dog. It’s a big deal! Proper puppy development relies on them having good socialization, a safe environment, and the right kind of training – whether that’s in-person or online dog training.

What you can expect to see in this particular developmental stage:

Now, this second fear period takes place when your dog is a bit older. They aren’t a young puppy anymore, but they haven’t quite reached adulthood or they might be just on the cusp of their first birthday. Between 6 and 14 months, your dog will have their second of the two puppy fear stages.

During this second stage, your dog will be more challenging to manage because of their larger size and personality changes. When they were a young puppy, controlling them was easier. Now, you essentially have a teenager in dog form, and they can be a force to be reckoned with when provoked. Thankfully, the symptoms and what you can expect from your young dog remain essentially the same. Their behavior will change, they’ll be more stressed and fearful, and they may hide or run away more.

The major difference between the first and second periods of fear in dogs is that the second period comes later in life after your dog has been trained in some way. To dog owners, the second fear period may seem like their dog is just misbehaving, so it’s crucial that you look out for the signs that show a scared dog rather than a mischievous one.

Remember to give your dog increased positive socialization during this stage, and give them plenty of space in the house and your own backyard. Your dog is more likely to pass their second fear stage with less stress if they have easy access to places to escape to and plenty of areas to hide in. For a happy dog, stay positive and don’t blame them for how they act during this developmental stage.

Common Symptoms of a Fear Period 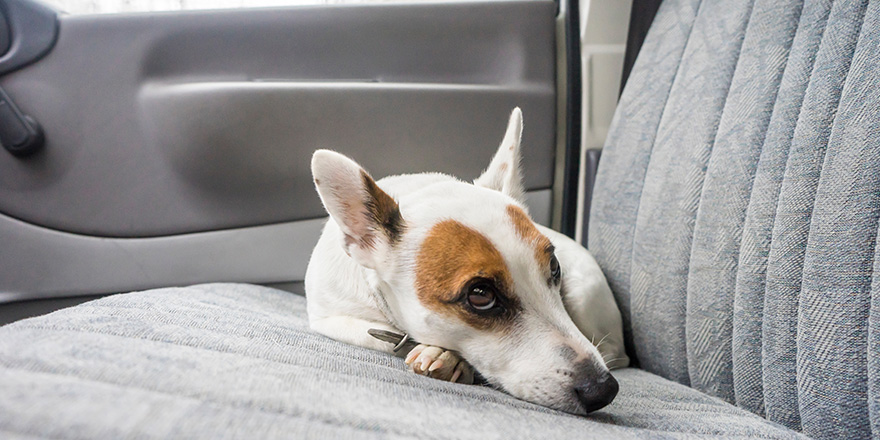 How to Help Your Puppy Through a Fear Period

A fear period may sound scary and overwhelming to a new dog owner, but we assure you that anyone can help their dog through these stages. You need to be committed to creating a fear-free environment for your dog and to be there to comfort them when it’s not possible to prevent their fear. Above all, you need to remain calm and understanding.

The latter fear period is a huge test of patience for any new dog parent. Your puppy has become an adolescent dog and it may feel like all of their training up to now has gone out of the window. We assure you, that isn’t the case! It’s just that adolescent dogs experience a lot of fear and suspicion during this second period of fear. Here’s how you can help them:

The contents of the www.mypetneedsthat.com website, such as text, graphics, images, and other material contained on this site (“Content”) are for informational purposes only. The Content is not intended to be a substitute for professional veterinarian advice, diagnosis, or treatment. Always seek the advice of your veterinarian with any questions you may have regarding the medical condition of your pet. Never disregard professional advice or delay in seeking it because of something you have read on this website.

Do you find yourself typing "puppy scared of me" in search engines and hoping for an answer that makes sense? If this is you and your scared puppy doesn't seem to be getting any better, it's time to look up fear periods in dogs. Puppies don't just suddenly become scared of their owners unless they are 1. Experiencing a fear period, or 2. Reacting to something you've done. Try to figure out what about your behavior is scaring your pup and avoid it.

In the event that your dog's fear imprint period has lasted for more than 3 weeks and their positive behaviors haven't returned, it's time to seek professional help for them. A fear period is not supposed to last because it can destroy your dog's confidence and make them afraid of everything. Try your vet for advice first, but also contact a dog trainer who specializes in fearful dogs. You'd be surprised how effective positive training can be to a dog who finds themself suddenly scared of everything.

Dogs
Canine Parvovirus in Dogs: Symptoms and Treatment
Weighing Up the Pros and Cons of Neutering a Dog

Dogs
How to Deal with Incontinence in Older Dogs
25 Dog Health Warning Signs: What To Look Out For

Dogs
25 Dog Health Warning Signs: What To Look Out For
Arthritis in Dogs: Symptoms and Treatment