Written By Sharon Parry
Last Updated December 24, 2021
Every product and service on My Pet Needs That is independently selected by our editors, contributors, and experts. If you purchase something through our links, we may earn a referral fee. Learn more

Keeping turtles as pets is getting more popular and it is easy to see why. Turtles that stay small are particularly common as pets because they don’t need a huge aquarium. The problem is that there are so many types of pet turtles that it can be hard to know where to start. You can find yourself spending hours online looking up various turtle species and whether they would make a good pet turtle.

We have done all that hard work for you. So, if you don’t know your wood turtle from your red-eared slider this is where you need to start!

The box turtles are an aquatic turtle species that are commonly found in pet stores. You will often see them called terrapins and their scientific name is Terrapene. Box turtles have a unique appearance – their feet are not completely webbed and their shell is a high dome shape. They are called box turtles because they can withdraw their head and legs completely into their shell – like a box.

Another distinctive feature is their hinged belly that can close very tightly. There are several types of box turtle including the eastern box turtle and the ornate box turtle. They are predominantly land-living but need a humid environment to stay healthy and happy. Feed them an omnivorous diet of vegetables, insects, worms, and fruits as well as commercial food pellets. They can be kept in an outdoor pond but only in warmer climates.

Top tip: Box turtles poop in their water bowls so make sure you clean it out every day

Wood turtles look as if their shell is made out of wood. They are lovely dark brown and tan turtles with yellow and red legs. The most common subspecies is the ornate wood turtle. The scientific name for wood turtles is Glyptemys insculpta but you may also see them called Old Red Legs.

Males are larger than females and these turtles can live outside as long as there is plenty of shade. They will hibernate during the winter season. This pet turtle likes to eat commercial food pellets and vegetables but prefers a meat-rich diet so add in some insects, krill, worms, and live fish.

Top Tip: The wood turtle can drown in water tubs that are too deep. 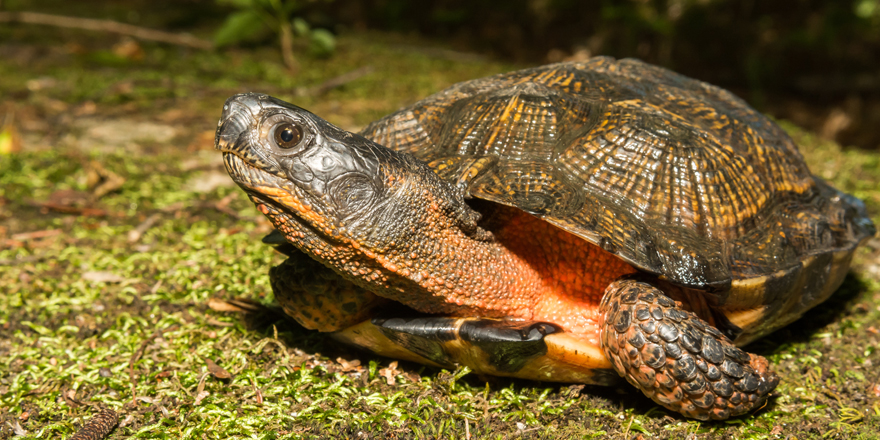 The red-eared slider turtle is also called the slider, the water slider or even the red-eared terrapin. Their scientific name is Trachemys Scripta elegans. Red-eared sliders got their name from the small red patch behind each eye. They are available all over the world and are one of the most common pet turtles in the US.

Red-eared sliders are an aquatic turtle species and strong swimmers – in the wild they live in ponds and marshes and even hibernate underwater. You can feed your red-eared turtle commercial food supplemented with green vegetables and fruit as well as insects, krill, worms, and live fish.

Top tip: Red eared sliders need an area of water that is twice their length

The Mississippi map turtle’s scientific name is Graptemys pseudogeographica kohni and they are called map turtles after the markings on their shell that look like a map. They make cute pets but can be nervous around humans. You will also see them called sawback turtles because they have a structure that looks like a saw on the top of their shell.

You should only ever get Mississippi map turtles from trusted breeders and they have very particular care requirements in a large aquarium. They are not the best choice for first-time turtle owners. Map turtles like to eat commercial food as well as spinach, dandelion leaves, lettuce, and parsley.

Top tip: Painted turtles need access to full-spectrum lighting for at least 10 to 12 hours a day

The common musk turtle is affectionately known as the stinkpot by turtle experts! This is because they release an unpleasant musky odor when they feel threatened. You can also get a nasty nip from them if they are not happy. Their scientific name is Sternotherus Odoratus and they are small turtles – they grow to just 5 inches.

The common musk turtle is a very popular pet but a lot of people underestimate how much work it takes to care for them. Musk turtles need a large and fully equipped aquarium and regular maintenance. Their diet should be mainly carnivorous – they like fish, insects and earthworms. Commercial pellets are also a good idea. You can try them with some green leafy vegetables but they are not always that keen on them!

Top tip: Common musk turtles do not like to be handled and can carry salmonella bacteria that are harmful to humans. The best approach is to just look at them. 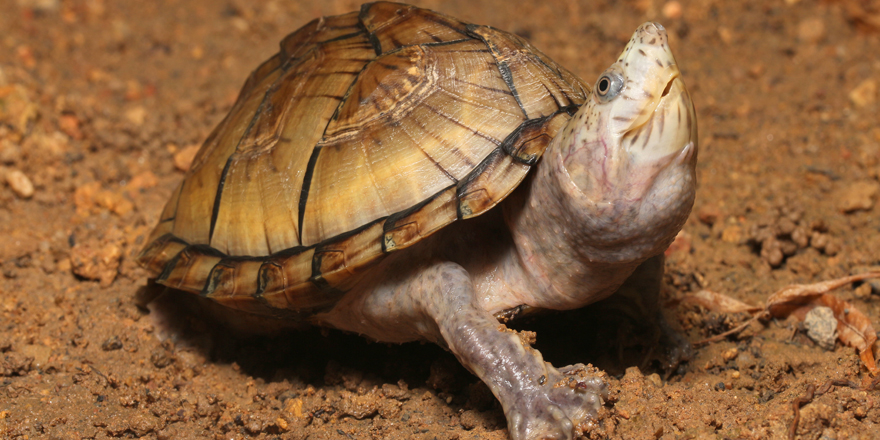 You may see African side neck turtles called African mud turtles or African aquatic sideneck turtles and their scientific name is Pelusios castaneus. They are originally from southern and eastern Africa but people all over the US are increasingly choosing them as great pets as they are quite active during the daytime. They are not an endangered species so there are no ethical issues in choosing them from a pet store.

They are called sideneck turtles because they cannot withdraw their head completely into their shell. Instead, they fold their head to the side and below their shell. In terms of appearance, they have a dark grey belly, a brown or olive head, and feet that are not completely webbed. They like to eat commercial food, insects and worms, and dandelions.

Top tip: The African sideneck turtle looks as if he is smiling at you – he isn’t! It’s just the markings around his mouth.

These aquatic turtles originated in the middle east and are easy to distinguish from other turtles by their olive or tan color with cream or yellow color markings that are clear on the shell, legs, and head.

Their scientific name is Mauremys rivulata and they have a smooth, oval shell. When they are young they are primarily carnivorous so these turtles require insects, krill, worms, and live fish. When they get older, you can feed them commercial food supplemented with insects, worms, and leafy vegetables.

Top tip: It is worth spending time engaging with your Caspian pond turtle because they will learn to recognize you!

The Reeve’s turtle’s scientific name is Mauremys reevesii and you will often see them called a Chinese pond turtle or even a Chinese Three-keeled Pond Turtle. Reeve’s turtles make a great pet turtle and are frequently imported all over the US from China and Japan. Whilst many aquatic turtles can be quite unfriendly, your Reeve’s turtle will love to be handled and stroked. Because they don’t need huge tanks and are fairly easy to look after they are a good option for first-time turtle parents. They are happy on a diet of commercial food supplemented by krill, worms and green leafy vegetables.

Top tip: The Reeve’s turtle is not a great swimmer! Do not let them near water that is more than a couple of inches deep.

Spotted turtles are mini turtles that have lots of unusual features that make them very interesting. They are turtles that stay small and therefore take up much less room than some of the larger species. The spotted turtle is semi-aquatic and likes to spend time both in the water and on land. However, they are not great swimmers so make sure that the water is not too deep.

As you would expect, the spotted turtle has spots! These are found on the shell and on the head as well as on the neck and legs. Their scientific name is Clemmys Guttata. They enjoy a varied diet of shrimps, worms, and insects together with leafy green vegetables. Commercial turtle pellets will provide Vitamin D3 and calcium.

Top tip: Don’t worry if your pet turtle has only a few spots. Spotted turtles start off with just a few spots but develop more as they get older. 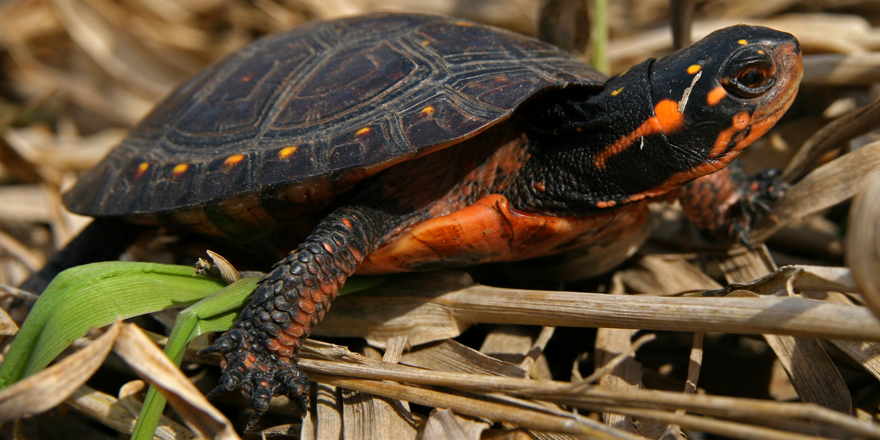 These turtles have a large head, a long neck and a sharp beak. Their shell has a keel (ridge) that runs the length of the shell and their legs are short. You can feed them commercial food with additional protein pellets as well as worms and crickets.

Top tip: These aquatic turtles need to be able to completely submerge and swim and like to walk along the bottom of the aquarium.

Yellow-bellied sliders or yellow-bellied terrapins as they are sometimes called are very popular aquatic turtle species. Their scientific name is Trachemys scripta scripta and they are an aquatic species.

The yellow-bellied slider is diurnal which means that they are most active during the day when their human companions are also awake! However, they don’t like being handled and have unique personalities which make them engaging if not affectionate pets. Your yellow-bellied slider turtle will love to eat dark, leafy greens like dandelion and will also enjoy chopped apple pieces. They also can eat the occasional insect or fish but should not be fed high protein meats.

Top tip: Feed them outside their tank – it makes cleaning up after them a lot easier

Different Types of Turtles at a Glance

Here is a useful summary of turtle types and essential facts about the different types of pet turtles.

The Best Turtle Tank Heaters in 2022

Other animals
Turtle vs Tortoise: Difference and Comparison
What Do Pet Turtles Eat: Everything You Need to Know

Other animals
What Do Pet Turtles Eat: Everything You Need to Know