A Tough Nut to Crack – Is it Really Safe to Feed Pecans to Your Dog?

By MyPetNeedsThat Staff
Last Updated May 4, 2022
Every product and service on My Pet Needs That is independently selected by our editors, contributors, and experts. If you purchase something through our links, we may earn a referral fee. Learn more

What we like to snack on may not always be good for our pets. This is why you should always know what human food is safe to give your dog in moderation, so you can resist those puppy-dog begging eyes.

When it comes to nuts, there are only a few that are safe to give your pup. And pecans are one of the ones to definitely avoid.

So, to answer the question – can dogs eat pecans? – we look at why this nut can be harmful to your pooch, and what you should do if they do manage to get their paws on some.

The Lowdown on the Pecan Nut

Pecans are native to the south-central region of Mexico as well as the US and come from a variety of hickory trees.

The word ‘pecan’ comes from the Native American Algonquin tribe (pacane) which means ‘a nut requiring a stone to crack’.

By the 18th and 19th centuries, the pecan nut was grown and harvested in larger numbers by French and Spanish colonists, who started to export the nut around the world.

A Nutritious Nut for Humans

The pecan shell gives it a similar look to a walnut although they are longer and not so round. The nut itself is sweet and so lends itself to a host of delicious dishes, including pecan butter, pecan ice cream, and pecan pie as well as being a nutritious snack in its own right.

For humans, the pecan has a high nutritional value, containing healthy fats such as omega-6 fatty acids and essential antioxidants. They are also high in fiber and protein and contain unsaturated fats.

Add in 19 vitamins and minerals, including magnesium and thiamine, and pecans are beneficial in lowering cholesterol and boosting human heart health.

But – and it’s a big BUT – all these health benefits are for people only and don’t automatically mean that dogs can eat pecans, not even as an occasional treat or in small quantities.

Are Pecans Bad for Dogs? 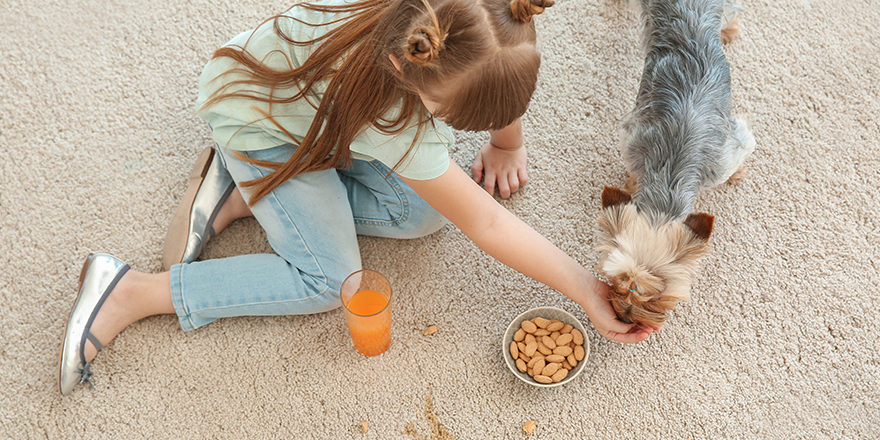 While dogs are not generally prone to nut allergies in the same way as humans, pecans are still a bad choice for your pet. And the nutritional value of pecans for humans is not a good reason to think they are generally safe for dogs.

In fact, this nut can make your dog ill and so not safe for them to consume. It may be tempting to feed your dog pecans but do resist.

Depending on the quantity involved, if your pet eats enough of these nuts, they could also prove fatal as they can be toxic to dogs.

The short answer is no – dogs should not be given pecans to eat. Here are the main reasons why pecans are not safe for your pooch:

Pecans are High in Fat

Like most nuts, pecans contain high levels of fat, including some bad fats which are not advised as part of your dog’s diet.

Too much fat in their food can directly contribute to weight gain and canine obesity, especially if fed sweet human foods. This is why you shouldn’t let dogs eat pecan pie.

The high level of fat in pecans can also have other health impacts, such as an increased risk of pancreatitis.

Pecans Can Cause Gastric Upset

One of the main side effects of pecans on canines is that they can cause havoc on a dog’s digestive system, leading to unpleasant gastric upset. And the reason for this is that pecans contain a natural poison called juglone.

While most people can tolerate this toxin (unless they have a nut allergy), a dog’s stomach is unable to cope with juglone, which is also found in hickory nuts, macadamia nuts, and black walnuts.

Although juglone is unlikely to prove fatal for your dog, it will cause unpleasant symptoms, including:

Pecans Can Lead to Mycotoxicosis

As well as juglone, pecans can also cause mycotoxicosis, because of a mold called aspergillus which can build up on the nut. This mold contains aflatoxins and tremorgenic mycotoxins which makes pecans poisonous and dangerous to dogs.

Mycotoxicosis from moldy pecans can cause seizures, tremors, high fever, diarrhea, abdominal pain, and liver failure in dogs if they ingest these mold toxins in a high enough dose.

Symptoms can last for up to a week and in the most severe cases can prove fatal. This means prompt veterinary attention is essential if your dog has eaten moldy pecans and you suspect mycotoxicosis.

Pecans Can Cause Bladder Stones

If your dog has eaten some pecans, then you should also pay attention to their urination as these nuts can also cause bladder stones.

Bladder stones are a common system of aflatoxin poisoning, especially if your dog has eaten enough pecans in one sitting or over a period of time.

Bladder stones can impact your dog’s ability to pee, and even prevent them from urinating altogether. They can also be very painful, and your dog may require surgery.

Pecans Can Be a Choke Risk

Pecans are sizeable nuts if they left whole or within their shell. And this size can present a choking hazard for your dog if swallowed, especially if they are one of the small breeds.

The hard husk on a pecan can also irritate and damage your dog’s teeth and gums, while the shell can break, causing sharp splinters which can injure their mouth, esophagus, and intestines.

Added Ingredients Can Be Harmful

It’s also essential to avoid any pecans that have been processed in any way as the added ingredients can be detrimental, even toxic for dogs. These include salted and roasted pecans or added toppings that include garlic, pepper, and onion.

Do Pecans Have any Health Benefits for Dogs? 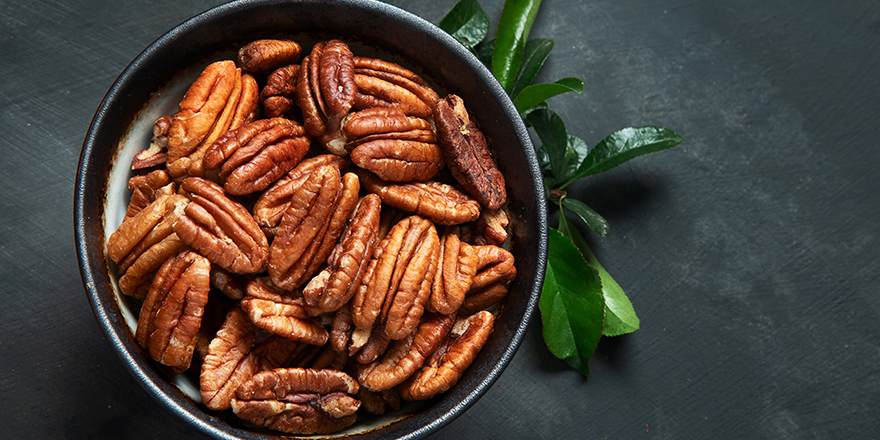 We’ve already looked at the nutritional value of the pecan – healthy fats, antioxidants, vitamins, minerals, and fiber – but it’s important to note that these benefits are mostly gained by pet parents, AKA, humans.

For your dog to max out on the health benefits of pecans, they would need to eat a sizeable quantity. And even moderate quantities of pecans can be toxic, outweighing any nutritional benefits.

Add into the fact that humans also tend to eat pecans in other forms such as pecan pie, ice cream, and nut butter, which all add processed ingredients such as sugar and extra fats into the mix.

Back to the nutritional value of pecans and are pecans safe for dogs. A small quantity is unlikely to cause lasting harm. But they don’t really offer anything new for your dog that they can’t already get from a canine-appropriate balanced diet.

Which makes answering the question, ‘can dogs eat pecans?’ much easier to answer. And that answer is no – it’s simply not worth the risk.

What you Should Do if Your Dog Eats Pecans

In most cases, a small amount of pecan is not going to harm most dogs, although it may cause a temporary stomach upset.

But as we have already seen, the toxins and potential mold in pecans can have serious repercussions if eaten in quantity. These include neurological issues, liver damage, and even death.

If you suspect your dog has eaten a large number of pecans or is showing symptoms of pecan nut poisoning, try to note how many they may have eaten and when then take them immediately to the vet.

Can Dogs Have Pecans or are They Best Avoided?

The best approach is to ensure your pet never gets the chance to eat pecans.

This means keeping them out of your pooch’s reach and never being tempted to give them to your dog as a treat. And this includes products such as pecan pie, as well as the nut itself.

And if you are lucky enough to have pecan nut trees in your garden or near your home, be extra vigilant when out exercising your dog as they can also pick the nuts up from the floor.

Are Any Nuts Safe for Your Dog?

While we have ascertained that pecan nuts are not safe for canines, there are a few nuts that dogs can eat.

Cashews and peanuts top the ‘technically safe for dogs’ list. Pistachios and almonds can also be tolerated by canines and shouldn’t be a cause for concern if your dog ate a few.

But many nuts, including pecans, macadamia, pistachio, and black walnuts are not safe for canines and can cause potentially serious problems if your dog ate them.

If you do want to give nuts to your dog as a treat, the best form is peanut butter, which many dogs adore. Xylitol-free Peanut or cashew butter can also be a good treat when training your dog but always use in moderation and not as a regular part of their diet.

However, even the safe nuts also have their issues.

They are naturally high in fat, which can impact your dog’s overall weight, health, and wellbeing.

Plus, you need to only give your dog these nuts in their natural form, and not processed, salted, or with extra toppings or coatings which can be detrimental for your dog.

Dogs and the Pecan Nut – The Final Word 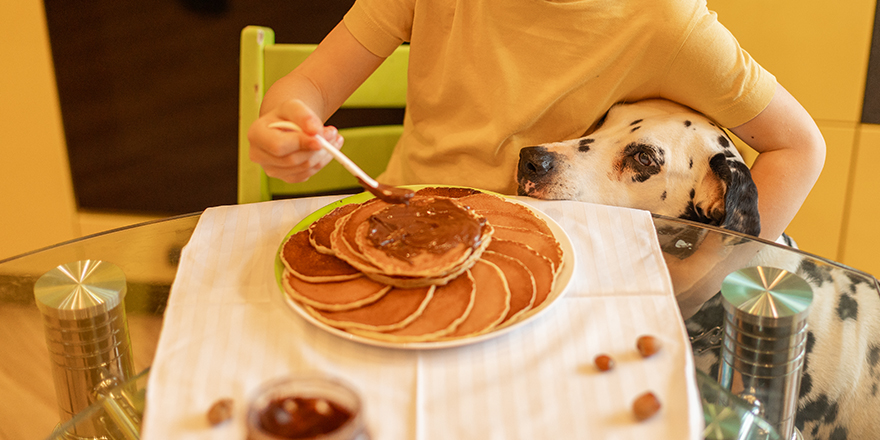 If you are asking yourself can dogs eat pecans, the easiest answer is no. And that means pecans are used as an ingredient in other foods as well as the nut itself.

Not only are pecans high in fats, but they also contain toxins that can potentially cause gastro upset, seizures, and damage to your dog’s liver.

The best way to keep your dog safe and healthy is to avoid pecans – and most nuts – all together and look for other healthy dog treats that complement their canine-appropriate, nutritious, and healthy diet.

And that is the answer to ‘are pecans safe for dogs’ in a nutshell.