By MyPetNeedsThat Staff
Last Updated April 27, 2022
Every product and service on My Pet Needs That is independently selected by our editors, contributors, and experts. If you purchase something through our links, we may earn a referral fee. Learn more

It’s not unusual to see dogs carry sticks around. Dogs and sticks go together as well as anything else, and canines seem to gain a lot of joy from having time to pick up a stick on their walk. If your dog is obsessed with sticks, or they spend a lot of time chewing sticks overusing their dog toys, then you might be interested in what we have to say on the subject. Read on to find out just why dogs like sticks. 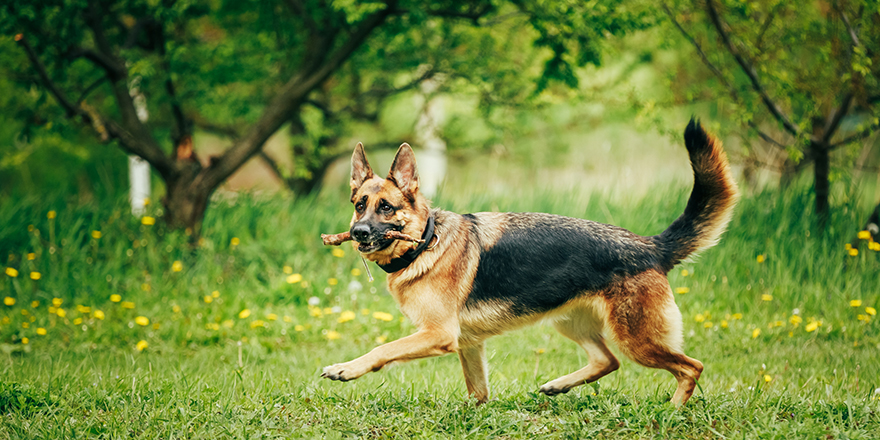 There are a number of reasons that your dog may be gaining a small stick collection in your backyard. Stick chewing is very common in dogs, and it doesn’t seem to matter what kind of stick it is as long as your dog can carry it.

There are plenty of humorous videos on the internet of small dogs carrying giant sticks, so it’s obvious that it doesn’t matter how big or small the stick is – there are other factors at play when a dog decides to pick up a stick.

#1 Sticks are Easy to Pick Up

Because of their shape, sticks are incredibly easy for your dog to pick up. Some canine friends may even be more ambitious and try and pick up a tree branch.

To your dog, anything they can fit their mouth around and carry is fair game. Dogs love carrying objects around, and wood has plenty of other uses.

Though your dog won’t get any delicious marrow out of a stick like they would from doggie bones, your pup will still enjoy chewing sticks for a similar effect.

Dog owners often catch their pup going to town on a stick, and one of the reasons behind this behavior is that sticks are similar in shape and size to bones.

When a dog owner throws a stick to play fetch with their dog, they are activating their dog’s hunting instincts. It’s the same with any dog toy that you throw for your dog. Their innate instincts will tell them to chase after their “prey”, whether their prey is a stick or a dog toy.

The feeling of a stick is nice to a dog. It’s almost pleasurable in a way. All types of sticks will do the job, but your pup is more likely to choose a dry, solid stick than one that is wet or broken.

It’s the same with things like rocks. If your dog is prone to chew rocks or using their mouth a lot when they’re playing, they are more likely to enjoy chewing sticks, too.

In addition, dogs with sore gums will often use textured things like sticks to help alleviate the pain of the soreness.

#5 Sticks Can Clean Their Mouth

The uneven texture and shape of a stick have the potential to be able to clean your dog’s teeth and mouth. When a dog feels like they have something stuck in its mouth, it will chew sticks to try and move the blockage.

Letting your dog chew sticks can actually help them develop. Mouth exploration is a huge part of puppy and young adult dog life. Plenty of dog breeds spend time getting to know the world with various parts of their body, and it’s not unusual for a dog to chew sticks or twigs so that they can explore the world with their mouth.

It’s similar to how your dog pauses during walks to sniff the ground or chew on the stems of flowers.

Similar to their hunting instincts, another reason your dog will chase a stick you throw and bring it back to you is their retrieval instincts. Dogs like the Golden Retriever are especially prone to bringing back objects for their owners to inspect. Certain sticks may have more appeal than others, and there is often a reason that your pup chooses a particular stick to bring to you.

Some dogs simply like the taste of sticks. It shouldn’t be an issue to let your dog chew sticks like they’re food unless the stick is broken (in which case you need to be concerned about the potential for splinters).

As long as it’s a whole stick from a non-poisonous tree, there’s little reason your dog can’t use a stick as a chew toy.

Dogs learn from the other dogs around them. If you have a multi-dog household and your new pup sees the other dogs chewing on sticks, they’re going to pick up those same habits. Chewing sticks is a common dog behavior, and it’s one that doesn’t come with any serious problems as long as the pet owner is vigilant when their dog is playing with a stick at home or out in the park.

Finally, there’s the smell. Depending on where the stick has been laying or where your dog finds it, it’s possible that it has a scent on it that your dog enjoys.

Dogs who are friendly with each other often play with the same sticks, too. Also, if your dog has a preferred stick in your yard that they seem to favor, they could be smelling their own scent on it.

Though your dog won’t get any nutrients from chewing on sticks, it won’t hurt them, either. The thing about chewing sticks is your dog uses them as a source of mental stimulation, pain relief, and development.

There are so many reasons that your individual dog could be chewing on sticks, but the ten we’ve listed above are some of the more likely ones. From gum disease relief to instincts from their ancestors, sticks provide endless enjoyment for all types of dogs.

Can Chewing Sticks Hurt My Dog?

There are some types of trees that are poisonous and you should endeavor to keep your dog away from these trees and their surrounding areas. You don’t know what sticks on the ground around these trees are safe and which can harm your dog.

If you can identify them, here are the trees you should keep your dog away from:

You shouldn't let your dog swallow the sticks that they're chewing, but there's nothing wrong with letting your pup chew on sticks that they find out on walks or in your backyard. Of course, be sure to avoid any areas where there are poisonous trees or other plants that can harm your dog.

The main reason that dogs love sticks so much is that they are easy for them to pick up, run around with, and chew on. Branches, sticks, and trigs can be a huge source of entertainment for your canine companion. As long as you're supervising their playtime, there's little reason to stop your dog from enjoying their stick collection.

The only reasons your dog would need to see any veterinarians after chewing on sticks would be if the stick had gotten stuck in their mouth, they swallowed part of it and are having trouble breathing, or a sharp stick has caused puncture wounds on your pup. Dogs are typically careful when playing with sticks, but accidents do occasionally happen and it's best to take action as soon as you can following any of these mishaps.

Dogs
Why Do Dogs Bury Things