How to Introduce Two Pet Mice to the Same Cage

By MyPetNeedsThat Staff
Last Updated March 8, 2019
Every product and service on My Pet Needs That is independently selected by our editors, contributors, and experts. If you purchase something through our links, we may earn a referral fee. Learn more

Pet owners who are keen on buying mice are quite rightly to be confused whether to put more than one mouse in a cage or not. Some experts say that mice are social creatures so definitely need company, while some say that putting two mice or more into the same cage will lead to fighting and therefore sometimes injury or worse.

In this guide, we look at how to introduce two pet mice into the same cage safely as we believe that mice do prefer to have some sort of company in their cage. We look at the logistics and practicalities of putting mice of the same sex and mice of a different gender into the same cage as well as ways ultimately for the introduction to be as safe and trouble free as possible.

1. Introduce Them When They Are Very Young

One of the key ways of introducing mice into the same cage, not to mention the easiest, is to introduce them when they are as young as possible. It makes sense as they grow up used to each other, much like human children do with full knowledge of each other. It means they have a dynamic of their own set up before any other behavioral problems are learnt which can lead to fighting by mice when they are older and introduced to a cage with other inhabitants. If you introduce them in this way, it does not matter what genders you introduce – whether two males or two females.

This may sound like another obvious idea, but it is so easy to forget too. If you introduce two mice to each other, it will help your end goal so much if you do so in a new cage. That cage will act like neutral territory so that neither of them feel that their home is being invaded and that they have to protect where they live. If you do not want to buy a new cage, try introducing them in a high sided box first that is free from any smells that have come from a mouse marking his or her territory. In the interim, clean out the old cage as best you can to remove any smells that have been implanted there by the then resident mouse. This is particularly the case with male mice.

3. Use The Power Of Scent

Some mouse experts recommend using the smell of vanilla to help with introducing new mice to each other. The scientific reasoning is that this incredibly strong smell results in all mice smelling the same. From there, a mouse’s instinct is that it is far easier to accept the other mouse as a friend. This is not a proven fool proof way of introducing mice to each other, but it has been recommended by enough people that it has worked enough times for it at least to be worth a shot at trying.

Like humans, there is a time of day where a person is more pliable than at others. With mice, this time is usually just before they go to sleep. Try introducing your two new pets at that point. You may have to watch them carefully first to ensure that you are confident of their sleep patterns. The idea behind this school of thought is that mice will naturally be calmer when tired as well as happier to snuggle up to each other for warmth before falling asleep. This is a bonding act that will bring them closer together so that they do not fight in future.

5. Introduce Them Little And Often

As with so many things in life, one of the best ways forward when introducing mice to each other, doing it little and often can reap rewards. This is a softly softly approach that may take longer but hopefully the short term pain will be the long term gain as your mice are more likely to grow used to each other over a period of time as opposed to being thrown in at the deep end. To make this approach as efficient as possible, set aside a time every day or every other day to introduce your mice to each other. Make that time longer and longer each time so that it then becomes possible to leave them living in the same cage together.

6. Let Them Have A Small Scrap

This may sound counterintuitive, but sometimes it can be a good idea to let your mice fight each other. In the animal kingdom, it is a way of letting them assert what the common hierarchy will be going forward which is necessary to almost every species out there. Just because they are mice does not mean that there will not be an alpha mouse in the cage that tends to rule the roost. To get to the stage where all inhabitants of a cage are happy with the hierarchy, they may well have to have a fight in the first instance. Just keep a close eye on them so that you can break it up if it gets too violent.

All these tips can be used in conjunction with one another to further aid the introduction of your pet mice to each other. In doing so, you should hopefully be far more successful than simply putting your two mice together in the same cage from the outset and hoping for the best. It is particularly important to watch your mice in the first 24 hours of introduction, if not the first week. Hopefully, by the end of that time, they should have at least reached an accord so that you can be happy in the knowledge that they won’t harm each other. 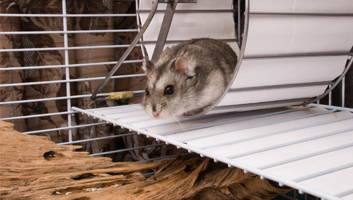 Other animals
The Best Mouse Cages in 2022
What Is Wet Tail in Hamsters?

Other animals
What Is Wet Tail in Hamsters?
Can Hamsters Eat Avocado? (Nutritional Guide)

Other animals
Can Hamsters Eat Avocado? (Nutritional Guide)
You May Also Like