How to Tell If Dogs Are Playing or Fighting

Written by MyPetNeedsThat Staff
Last Updated July 20, 2022
Every product and service on My Pet Needs That is independently selected by our editors, contributors, and experts. If you purchase something through our links, we may earn a referral fee. Learn more

Dog play fighting is completely common amongst our canine companions. This behavior is normal for all, if not most dogs, but you may wonder if you should interfere at a certain point.

Some behaviors such as bouncing, growling, and constant open mouths with goofy grins are normal, but what about body slamming, snarling, and lack of tail wagging? At what point does play fighting become rough? Read on to find out how you can determine whether your pooch is playing or fighting and how to prevent them from getting hurt.

Why Do Dogs Play Fight?

Dogs play fight for numerous reasons. To start, it’s actually a very common way for dogs to communicate and socialize. Many dogs can develop lasting friendships with other dogs after a play fight or two.

Moreover, play fighting is a fantastic way for dogs to release pent-up energy, which is why it sometimes looks a little intense. To some, it can be alarming to see dogs wrestling, but it’s a completely normal dog play behavior that they learn from the time they are puppies.

To better understand your dog’s motives when engaging in a scrap with another canine, look at their body language. Deciphering your dog’s body language can effectively tell you everything you need to know and whether you need to interfere or not when they are play fighting.

How to Tell When Playing Turns into Fighting 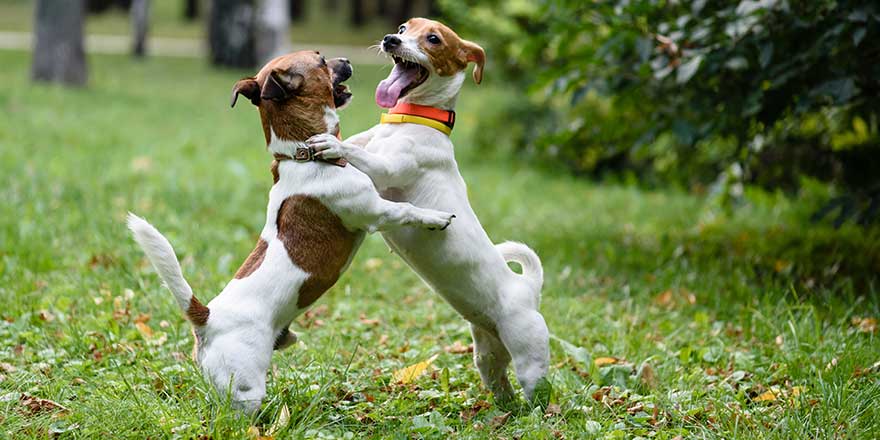 Dog play fighting can be adorable to watch, but how do you tell if it’s turned into real fighting? Typically, if the dogs in question are your furry friends, you will know instantly, but if you’ve taken your dog to the dog park and they are interacting with other canines, you may need to keep an eye out for the warning signs.

Why Can Play Fighting Turn Rough?

It’s rare, but some adult dogs use play fighting to assert dominance and become the top dog. Therefore play fighting can sometimes turn ugly and into real fighting. When dog play fighting turns into serious fighting, it can catch you off guard, but there are signals you can look out for, including:

Dog play that turns into a real fight can often happen if a toy or treat is involved. Some dogs can be protective over their possessions, but they might become too protective, causing play to turn ugly.

So if you’re asking, ‘are my dogs fighting or playing?’, look at the lists below. Here you can find a list of behaviors that suggest you’re dogs are playing or fighting.

Positive Signs – No Need To Interfere

Some speculate that rough play fighting is an animals’ way to practice their combat skills, but there is no evidence to suggest this. Some dogs may play in a way that might cause concern, but it’s important to consider their existing bond. If two dogs have grown up together and are used to playing with one another, their play fighting might become a little bit rough, which is normal. 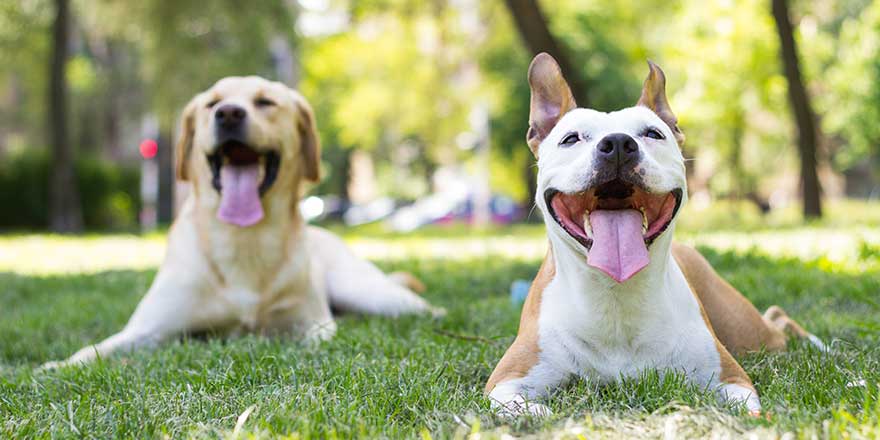 How to Break up a Dog Fight

Hopefully, you will never be in a position where you need to break up a dog fight. With the tips above, you should effectively be able to avoid any potential conflict when you start noticing troubling signs.

However, if you are concerned, there is nothing wrong with being prepared and having a plan. First, never attempt to break up a dog fight by physically touching or grabbing your dog or the other dog; this can result in getting bitten.

One of the most effective ways to have them scurry away is by making a loud noise. Get yourself an air horn that you can keep at hand if you’re out and about. You can also stop fights at home by banging pots and pans together or using a hose to spray them. You can also use a blanket to cover one of them or a broom or other large item (even a baby gate) to separate the two.

When You Have No Other Choice

If you absolutely have to physically separate them, you can use the wheelbarrow method as a last resort if there is more than one person around. This involves a person taking a dog each. You will have to grab their hind legs and lift them from behind. From here, you will need to walk backward and into an area where the dogs can no longer see each other. Alternatively, if it is still attached, grab the dog’s leash to pull them away from each other.

These options are often enough to make most canines snap out of their rage and/or give them the option to run away while separated. After successfully breaking up a dog fight, check them for any injuries.

Research suggests that dogs social play as a way of communicating, burning energy, and attempting to form new relationships with other canines.

Yes but it's important that you supervise play times and look out for any signals that your canines are becoming irritable.

Puppies fight for the same reasons adult dogs play fight. It is a way to let off some steam and get to know their puppy pals.

Tail Biting in Dogs: What Are the Causes?

Dogs
Tail Biting in Dogs: What Are the Causes?
Harmless Behavior or Something Serious – Why Do Dogs Lick the Wall?

Dogs
Harmless Behavior or Something Serious – Why Do Dogs Lick the Wall?
Why Does My Dog Lick My Belly Button

Dogs
Why Do Dogs Like Sticks
Do Dogs Ever Get Tired of Barking?

Dogs
Do Dogs Ever Get Tired of Barking?
Why Does My Dog Hate Puppies?

Dogs
Why Does My Dog Hate Puppies?
It Must Be Puppy Love – How Do Dogs Choose Their Favorite Person?

Dogs
It Must Be Puppy Love – How Do Dogs Choose Their Favorite Person?
Why Do Dogs Sneeze When Playing?